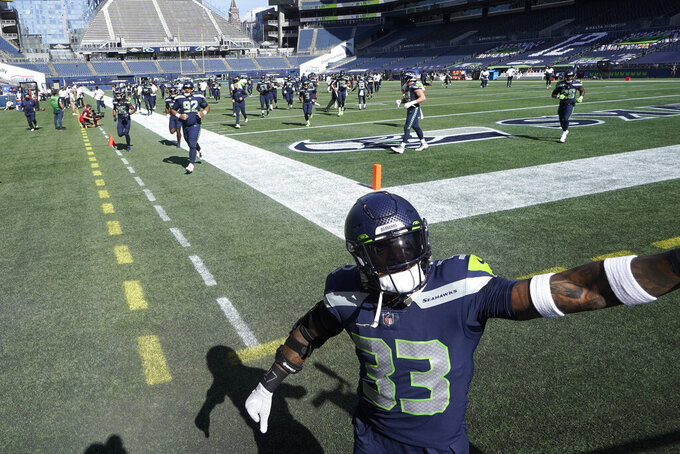 Seattle Seahawks strong safety Jamal Adams reaches up towards the stands as he heads to the locker room before an NFL football game against the Dallas Cowboys, Sunday, Sept. 27, 2020, in Seattle. (AP Photo/Elaine Thompson)

RENTON, Wash. (AP) — The Seattle Seahawks still don’t know when or if they’ll get the services of wide receiver Josh Gordon this season and if his current suspension will be lifted by the NFL.

They continue to be linked in rumors about another currently suspended wide receiver in free agent Antonio Brown.

They brought back a familiar face by signing linebacker Mychal Kendricks to the practice squad.

And their biggest offseason acquisition — safety Jamal Adams — might miss a third straight game because of a groin injury.

Coming back from its bye week, the last remaining unbeaten team in the NFC seemed filled with news on Wednesday.

In the immediate future, the most pressing was the ongoing uncertainty about Adams and his recovery from a groin strain suffered in Week 3 against Dallas. Adams sat out wins over Miami and Minnesota, but Seattle coach Pete Carroll believed prior to the bye week that Adams would be ready to return for Sunday’s game at division rival Arizona.

But Adams was not on the practice field on Wednesday. Carroll said the team is still waiting to find out when Adams can go at full speed.

“We really won’t know anything until later in the week,” Carroll said.

The uncertainty about Adams means that Ryan Neal could make his third straight start at strong safety. Neal has played well in the absence of Adams, and has earned an opportunity to be included in Seattle’s defensive plans even when Adams returns.

While Adams remained out, Seattle did get a boost with rookie Jordyn Brooks returning to practice on Wednesday for the first time since spraining his knee in Week 3 against Dallas. Brooks' return will add depth to the group of linebackers that received another boost with the signing of Kendricks.

Last season, Kendricks started 14 games and had 71 tackles for Seattle before suffering a major knee injury in the regular-season finale against San Francisco. For now he’s on the practice squad with Seattle wanting to give Kendricks plenty of time to acclimate after spending the offseason rehabbing the torn ACL in his knee.

Carroll said Kendricks will start off playing weakside linebacker, but he did play at the strongside linebacker spot last season for Seattle.

“We’re really excited to get him back, really thrilled that (Mychal) will take this time to get himself in football shape,” Carroll said. “And he’s a well-conditioned kid, he’s strong as hell. So it’s none of that stuff, he just needs to get football-wise, ready. I’m really happy that he’s here.”

While Carroll was happy with the addition of Kendricks, he was also peppered with questions about a pair of wide receivers.

Seattle signed Gordon on Sept. 3 even before being reinstated by the league. That wait has continued for Seattle with seemingly no clarity on when it may end.

Gordon was suspended indefinitely by the NFL last December for violating the league’s drug policy. He tested positive for performance-enhancers and “substances of abuse,” the league said in a statement at the time.

He applied for reinstatement in June.

“The decisions are made by the league and we really don’t know and don’t have contact to speak of here,” Carroll said. “We don’t know any more than really you do at this point. We’re just waiting it out for word from the league.”

As for Brown, a report from ESPN on Wednesday indicated Seattle may be looking to pursue the wide receiver once his suspension for violations of the personal conduct policy is up after eight games. Brown could still face further discipline from the league, but he’s been linked with Seattle for much of the offseason.

By David Ginsburg 16 minutes ago
an hour ago
By Dennis Waszak Jr. 2 hrs ago
By Dave Skretta 2 hrs ago
By The Associated Press 3 hrs ago