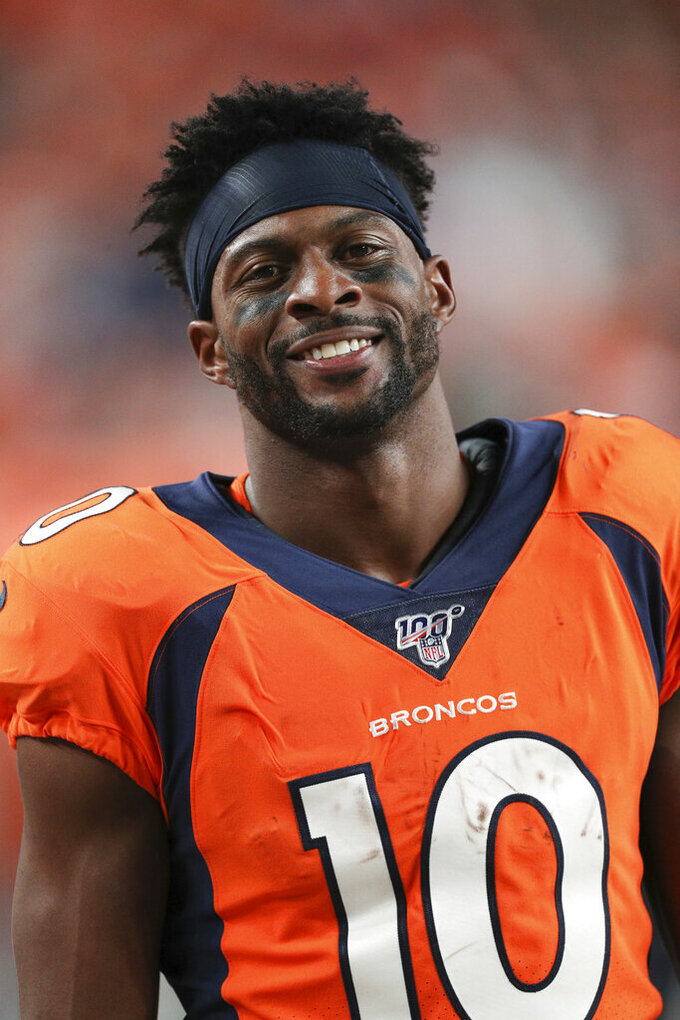 SANTA CLARA, Calif. (AP) — The San Francisco 49ers have raced out to six straight wins to open the season despite lacking a dynamic receiver who could change a game in a single play.

So when the opportunity to acquire a player like Emmanuel Sanders presented itself, the Niners didn't hesitate to make a move, giving up a pair of draft picks for a 32-year-old receiver in the final year of his contract.

"It always gives you pause when it comes to draft picks and everything," coach Kyle Shanahan said Wednesday. "But, we feel he's a guy who can come in and help us a lot this year and we'll see where it goes for him after that. We're very well aware that he'll be a free agent at the end of this year and we'll see how this year goes and hopefully we'll be able to keep him here. Risks always go into that, but you can get guys hurt on your roster and be out of luck."

The 49ers (6-0) made an aggressive move Tuesday, trading 2020 third- and fourth-round picks to the Broncos for Sanders a fifth-rounder, giving Shanahan a player he has coveted for years.

The move takes the previously disgruntled Sanders from a team near the bottom of the standings in Denver to one of the league's two remaining undefeated teams in San Francisco.

Sanders is undergoing a crash course to learn the offense in time to play Sunday against Carolina. He arrived at his hotel around 9 p.m. Tuesday and spent a couple of hours with position coach and former Denver teammate Wes Welker learning the playbook.

He spent Wednesday in meetings and a walkthrough before taking part in his first practice. He also is building a rapport with quarterback Jimmy Garoppolo, a process he doesn't believe will be too difficult, especially because Denver's offense is similar to San Francisco's because Broncos coordinator Rich Scangarello spent the past two years as quarterbacks coach for the 49ers.

"It shouldn't take too long for it to happen," Sanders said. "I've been talking to Jimmy. Based off this system with Kyle, I feel like if we work at it, we can be successful in this system together."

Sanders has been successful for most of his career, starting off in Pittsburgh with Ben Roethlisberger at quarterback and then in Denver with Peyton Manning. He had three straight 1,000-yard seasons from 2014-16 and has bounced back this year after undergoing season ending surgery on his Achilles' tendon and ankle in 2018.

Sanders had 30 catches for 367 yards and two TDs in seven games with Denver, and has the versatility to play both outside and inside in San Francisco's offense.

"He's a playmaker," Garoppolo said. "If you give him a chance on the ball, he'll make you look good. Just getting him in space, giving him opportunities to showcase his talents. He's fast, gets out and cuts quickly, runs good routes and so all those things. It's exciting."

San Francisco had previously used second- and third-round picks to trade up to draft Dante Pettis in 2018 and used a second-round pick on Deebo Samuel and a third-rounder on Jalen Hurd this past year.

But none of those selections have turned into big-time playmakers yet with Pettis struggling with consistency and recording only nine catches for 83 yards, Samuel having 15 catches for 168 yards and Hurd spending all season so far on injured reserve with a back injury.

That led to the need to add Samuel to upgrade a receiver group that ranks last in the NFL with just 49 catches so far and second worst with 679 yards receiving.

The Niners had looked into trading for Odell Beckham Jr. in the offseason before he was dealt to Cleveland by the New York Giants.

But they were able to get Sanders, sending a message to the players that management believes this team has the ability to compete for a title.

"It energizes it, not that we really needed to be energized," fullback Kyle Juszczyk said of the message to the locker room. "Everyone is feeling really good right now. I'm excited to have Emmanuel here. Absoulte playmaker and something I think will definitely help our offense."