Analysis: Overtime the right time in NFL through five weeks 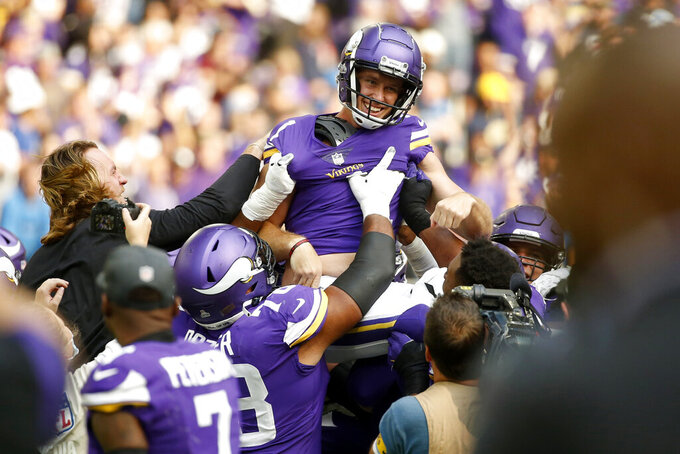 Nobody's working 9 to 5 in the NFL. In fact, overtime has become practically imminent.

Through the first five weeks of the schedule there were eight games that went into an extra period, at least one every week. That ties three other seasons for the most, and projects to 27 for the entire season, which, of course, has 17 games per team for the first time. The full-schedule record is 25 in 2002.

Only in 2018 were there OT finishes in each of the first five weeks. So far, we've seen the Bengals beat the Vikings 27-24 and the Raiders defeat the Ravens 33-27 on opening weekend; the Titans over the Seahawks 33-30 the next week; the Raiders again, this time beating Miami 31-28 in Week 3; the two New York teams victorious in Week 4 for their only wins so far, the Giants 27-21 at New Orleans, and the Jets 27-24 against Tennessee; and last weekend, Green Bay outlasting Cincinnati 25-22 in a kicking farce, and Baltimore downing Indianapolis 31-25.

For a league that loves to boast about the closeness of contests, that's a breathtaking start. For the players and coaches involved, well, it's exhausting.

“It was a resilient group that showed through the effort, especially in overtime,” Bengals coach Zac Taylor said after falling short against Green Bay. “They played to that final down. Things just didn’t go our way. That’s life in the NFL sometimes. There are plenty of things we have to correct. There are some different mistakes we have not made previously that we made and there are some things to clean up.

Oddly, several of the overtimes thus far have involved lower-regarded teams against high-profile opponents. Certainly that is true of both Cincinnati OT games, as well as the wins by the Jets and Giants, and the Raiders against the Ravens.

An obvious theme that has emerged from the overtimes is worn-out defenses. Nearly all of the eight matches so far were decided in great part because of wilting Ds, particularly in the wins by Las Vegas, Baltimore and Tennessee. Neither the Bengals nor the Packers could stop each other in OT last Sunday. That was left to the bumbling kickers.

That Green Bay emerged with a victory simply came down to a veteran placekicker, Mason Crosby, shaking off one of the worst performances of his career, and the Packers showing the same resilience Taylor spoke about with the Bengals.

“We stuck together and that’s all that mattered at the end,” running back Aaron Jones said. “We didn’t blink or flinch. That’s the testament of a good team.”

Are all of these overtimes good for teams? Good for the NFL? Good for fans?

Mostly, the answer would be yes. It remains an annoyance that a team can win the coin toss for OT, score a touchdown and walk off with a W. Not that the college game's overtime setup is perfect, but at least it doesn't rely on the luck of heads or tails. At least that scenario has occurred only twice in the eight NFL overtimes in 2021, by the Giants and Ravens.

The league is satisfied with the OT rules and thrilled by the excitement an extra period brings. So are the network partners, even if CBS winds up needing to push back the start of “60 Minutes” some Sundays.

As for the guys on the field, the only thing worse than a last-second loss is an overtime defeat. As exhaustion sets in — and it absolutely does regardless of what they'll claim — even some of the best players and units struggle. Just look at the Ravens on Monday night.

The league adopted a shortened overtime, from 15 minutes to 10, in 2017. Player safety was part of that move, as was diminishing the chance of games running into each other on the networks. Less-conservative play calling also was sought.

So far, it has worked, though in 2018, '19 and 2020 there were ties when both teams ran out of time. It would be problematic, of course, if the team taking the kickoff used up all 10 minutes of OT, kicking a field goal as time expired, not allowing both sides to have a possession as the rules call for in such a scenario.

Then again, a 10-minute drive in overtime probably deserves a winning kick.