Belichick mum on QB decision as other roster decisions loom 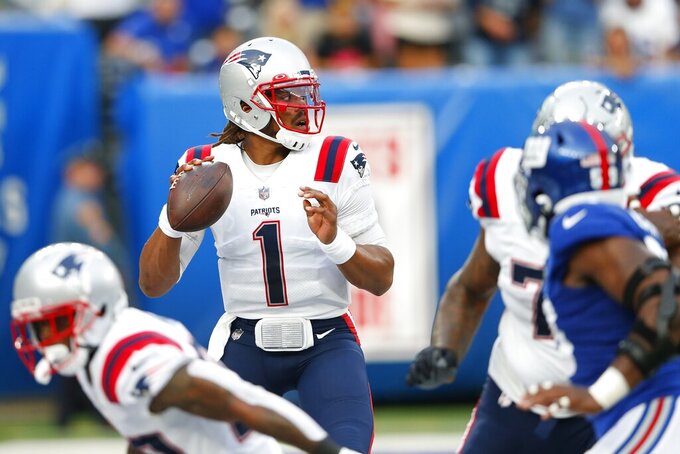 But that’s just one of several intriguing decisions the Patriots coach must make before Tuesday’s 53-man roster cutdown.

Newton has looked much improved this preseason after a disjointed 2020 season in which he finished 7-8 as the starter in his first season taking over for Tom Brady following his departure to join the Tampa Bay Buccaneers.

Newton started each of New England’s three preseason games, but also missed five days of practice leading into Sunday’s exhibition finale after a “misunderstanding” of NFL COVID-19 protocols. It required Newton to sit out a mandatory five-day waiting period for unvaccinated players after he attended an out-of-town doctor’s appointment.

Jones has shown steady improvement throughout training camp, displaying an ability to lead the offense down the field and bounce back from mistakes. He’s also earned the respect of incumbent veterans on the roster.

Still, Newton's light workload in the three exhibition games — 38 snaps, compared to 107 for Jones — seem to be an indication that Newton will have the starting nod for the Sept. 12 home matchup against Miami.

“I feel like whatever we do in the next couple of days, like every day, should be what’s best for our football team, and that’s what we’re going to try to do,” Belichick said Monday.

While that likely will mean the Patriots begin the season with Newton under center, it will continue to be a position to watch. New England opens its schedule with back-to-back division games and a matchup with New Orleans in Week 3 before Brady and Tampa Bay visit New England in Week 4.

A slow start by Newton could certainly precipitate an early change.

Here are some other things to watch heading into Tuesday’s roster cutdown:

Cornerback Stephon Gilmore entered the preseason looking like a possible holdout. He’ll end it with his status still very much unsettled.

The 2019 NFL Defensive Player of the Year, Gilmore made it known publicly this summer that he wasn’t excited about playing for a base salary of $7 million in the final year of the five-year, $65 million deal he signed in 2017.

He missed the Patriots’ entire offseason workout program before reporting to camp on time. But he’s spent the entire preseason on the active/physically unable to perform list following surgery on his quadriceps.

But the defense has a bare cupboard at the position outside of J.C. Jackson. It makes it highly unlikely Gilmore will be cut and Belichick may have to find a way to make him happy by the time he’s ready to return to the field.

Another player in the spotlight is receiver N’Keal Harry.

Despite two lackluster seasons, the 2019 first-round pick made a surprise trade request prior to camp, before softening it shortly after reporting.

He had his moments before being sidelined with a shoulder injury in the second exhibition game against Philadelphia.

That injury may limit the Patriots’ options for him. It would be tough for the Patriots to simply cut a former first-rounder and get nothing in return. His injury complicates potential trade scenarios, though.

The Patriots have had at least one undrafted player make their opening week roster each of the past 17 seasons. That streak is in jeopardy of coming to an end.

Kicker Quinn Nordin looked as if he might have a chance to unseat 2020 starter Nick Folk after he missed some time in camp with an unspecified injury.

Nordin was strong in practice but had a disastrous exhibition outing against Philadelphia in which he missed a field goal and two extra points. Folk returned to practice the following week and has been consistent, a sign he’ll probably hold onto his job.