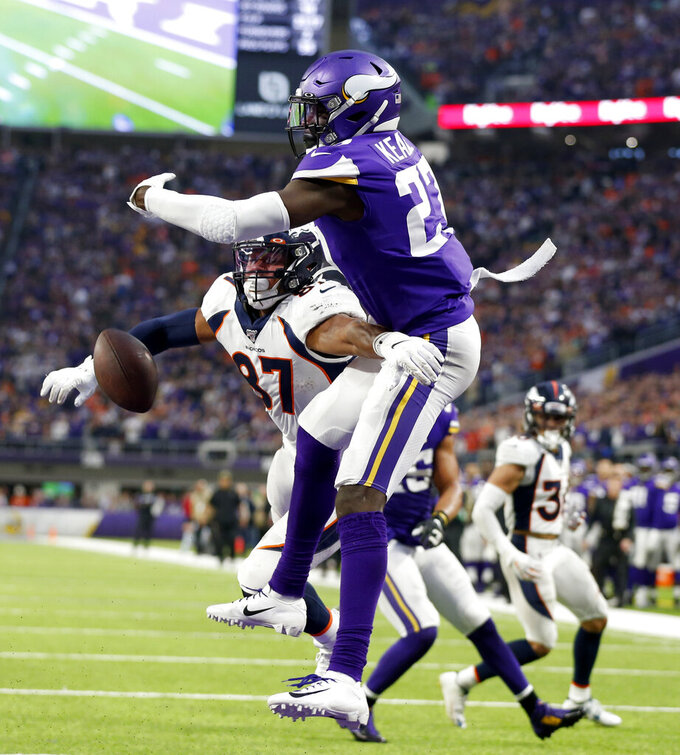 MINNEAPOLIS (AP) — The defense that has long been the backbone of the Denver Broncos was staked to a 20-0 lead at halftime in Minnesota, after two full quarters of all-phases domination of the Vikings.

The offense managed only three more points. The defense lost yet another late lead, and this collapse was the most painful one yet.

“We ain’t never got 20 points in the first half,” cornerback Chris Harris Jr. said. “So, when we get that, we’ve got to take advantage of it, for sure.”

The Broncos lost on field goals in the final minute three times earlier this season.

“Defensively, we didn’t execute. That’s what hurts the most, knowing that my side of the ball is what the let the team down,” safety Justin Simmons said.

Minnesota scored touchdowns on each of its four second-half possessions. After limiting the Vikings to 47 total yards in the first half, Denver allowed 274 yards in the second half on four drives that each covered 62 yards or more.

“They went no-huddle, started throwing it a lot, and we didn’t defend it well enough,” Denver coach Vic Fangio said. “We just couldn’t make a play to get off the field there in the second half. Their passing game was better than our pass defense.”

The defeat was sealed when Brandon Allen’s final three passes to the end zone from the 4-yard line fell incomplete.

“We shouldn’t put the offense in that situation and made it hard for them to win a game for us,” Harris said. “They spotted us enough points that we’ve just got to close a game as a defense together.”

Minnesota started the second half with the ball and immediately pushed the pace. Cousins connected with Stefon Diggs for 44 yards, setting up the first touchdown. On the second drive, the Vikings covered 75 yards, going 18 plays in just 5:58.

The Vikings had five plays of at least 20 yards in the second half. Diggs caught a 54-yard touchdown pass to bring the Vikings within 23-20, with 6:10 left

“They just tried to hurry us up and scramble us, and we just got a little discombobulated, and communication lapsed right there,” Harris said.

The Broncos entered the game allowing the fourth-fewest yards per game (309.7) in the NFL this season. They were tied for the sixth-best scoring defense, giving up 18.9 points per game. But when Denver has had opportunities to close out potential wins, the defense has faltered.

The letdowns have been all too familiar to Fangio, in his first season on the job. He even corrected a reporter in his postgame press conference with an accurate tally of the last-minute losses.

“I think we’re close, obviously as you alluded to, but we haven’t gotten over the top well enough yet,” Fangio said. “We’ll eventually get it done. These guys are good guys. They’re working their butts off. They enjoy coming to work. They like playing. We’ll just keep grinding, keep pounding, and eventually we’ll get through it.”