Broncos' DeMarcus Walker living up to his billing in Year 3 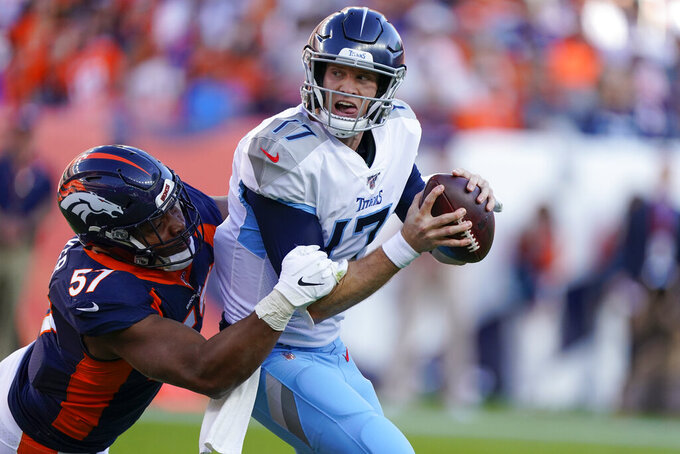 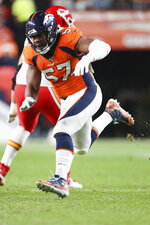 While Miller fights his way through the longest slump of his career, Walker, a third-year pro from Florida State, is finally living up to his billing as one of the top inside pass rushers in the 2017 NFL draft.

When general manager John Elway selected him with the 51st overall pick, he called Walker "a great inside rusher," and Florida State coach Jimbo Fisher said Walker was "one of the top defensive players in school history."

Walker didn't get much of a shot at proving himself under former coach Vance Joseph and his staff, who moved him to outside linebacker his rookie season, requiring him to learn coverages and new techniques while also dropping 20 pounds.

Although Joseph moved him back inside, Walker had to gain back the weight he'd lost and ended up the odd man out in the defensive line rotation. He played in just three games and took less than 3% of the defensive snaps in 2018, again recording a single sack.

"D-Walk has gotten so much better," Joseph said last December. "He's kept his weight. He's about 285 right now, so he's grown in that area. It's a tough room. We've got six guys in that room, only five guys dress and that's five pretty good players. It's pure numbers for him. He's ready to play, he's itching to play and he's in my office every week asking to play. It's just pure numbers, that's all."

Walker saw Joseph's firing and Fangio's hiring last winter as a chance to kick-start his career, and he's done just that, playing in every game for Denver (2-5) so far, making his first career start against Jacksonville last month and collecting 17 tackles and a pass breakup.

Even though he's only played a third of Denver's defensive snaps, Walker leads the Broncos with four sacks, 1½ more than Miller, who's played 91% of the time.

"I'm making the most out of my opportunities," Walker said. "But mentality-wise, I'm feeling like my old self."

Like the guy who accumulated 27 sacks , forced seven fumbles and recovered two fumbles in four seasons with the Seminoles. His 16 sacks his senior season made him a prized prospect.

"I'm heavier than I was in college, but I'm holding it just like I did in college," Walker said. "I'm able to move at 300 pounds and just keep my power and my strength and definitely my speed."

Although others doubted him in Denver, Walker never gave up hope.

"We're all human. At some point in your career, everyone has a question mark in your brain. I've been down on myself before but I never once lost my confidence," Walker said.

He said he leaned on his faith and kept working hard.

"The road to success is a dark tunnel and sometimes you might not see the end, the light," Walker said. "It's your job to just keep walking no matter what. Some people fall, some people turn around. Not me."

That determination was evident right away to defensive coordinator Ed Donatell, who followed Fangio to Denver.

"His play has spiked," Donatell said during training camp.

After recording a sack, a tackle-for-loss and two QB hits in Denver's preseason opener, Walker was so excited he just had to make sure Fangio knew.

"He came right up to me after the game and he was talking some smack," Fangio said. "We'll see, I'm anxious to see. You don't see everything during the course of the game, especially where I'm standing now. But he did tell me he played well."

After watching the film, Fangio cracked that Walker "exaggerated a little bit."

"It wasn't bad, but he had me thinking he was getting nominated for Canton," Fangio said with a chuckle. "It was good, but not great."

He's been pretty good ever since.

"I can't comment on what happened before I was here, but since we've gotten here, he's been a really good worker," Fangio said. "The guy likes football, which to me is important, especially in a defensive lineman. He's been competing and taking advantage of his opportunities and his reps. ... He's getting a little bit better each and every week."

Notes: Fangio said Thursday that RT Ja'Wuan James looked OK in his first full practice since hurting his right knee in the season opener. The plan is to rotate James and tackles Elijah Wilkinson and Garett Bolles if he's able to play at Indianapolis (4-2) this weekend.