Can playoffs be as unpredictable as end of regular season? 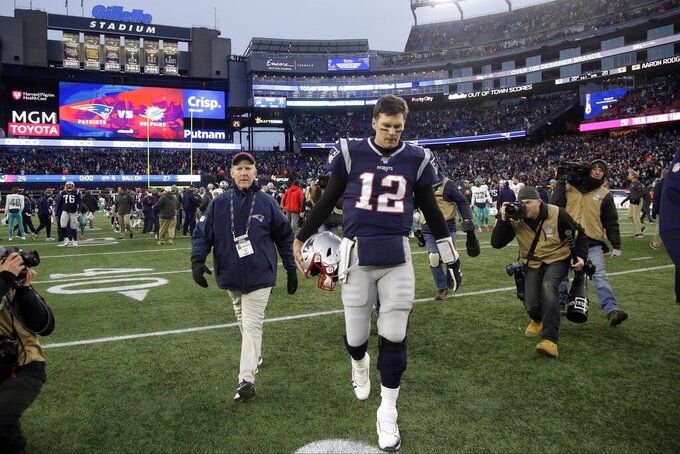 If you predicted when December began that the Patriots would be playing in the wild-card round, take a bow.

If you said back then the Eagles would win the NFC East, particularly after a loss at Miami and a string of injuries that would send most teams spiraling to the bottom of the league, raise your hand.

How about the Chiefs winning as much with defense as offense? Same thing for the Packers? Did you get those right?

Not a whole lot went as expected at the conclusion of the 16-game schedule. So as we head into January and the postseason, nothing is certain.

Here's a look at all 12 participants:

Any team that rides a 12-game winning streak to the wire and goes 14-2, including victories over some very strong competition, deserves a Super Bowl front-runner role. Lamar Jackson's mercurial rise from developing quarterback to nearly unstoppable force, plus a balanced roster, strong special teams and terrific coaching, puts the Ravens atop the NFL.

“This is the best team in football during the regular season. There's no doubt about that," coach John Harbaugh said. “That's done. But that doesn't count anything toward the next season."

The major reason the Chiefs didn't make the Super Bowl last season was a defense that couldn't stop air. Now, under coordinator Steve Spagnuolo, that unit is formidable.

Getting a wild-card bye was huge as the Chiefs get to heal up and also enjoy an extra week to prepare for their next opponent, which could be the Patriots.

Yeah, yeah, we know: The Patriots have been declared doomed so many times before and wind up lifting the Lombardi Trophy.

This has a different feel. Consider that they lost to the Dolphins in Foxborough with the No. 2 seed on the line. The defense that carried them much of the season was torn apart, particularly in the clutch. The offense looked ordinary,

Still, their resume says to never dismiss the Patriots.

“It was a great chance for us to not play next week, and we didn’t take advantage of it,” Tom Brady said. “We just didn’t play good enough.''

The Texans' postseason history tells us they will stumble early, perhaps next weekend against the Bills. They have playmakers on both sides of the ball, and they will play at home, though.

No opponent will intimidate the Bills, certainly not the Texans. Look for a low-scoring affair that could be decided by just how much second-year quarterback Josh Allen has matured.

If the Titans get running back Derrick Henry going the way he has for most of the last two months, and Ryan Tannehill protects the ball, Tennessee will not be an easy out. Not even at Gillette Stadium.

After barely surviving at Seattle on Sunday night — and pretty much surviving a season full of edge-of-the-cliff outcomes — the 49ers earned the top seed. A team that went 4-12 in 2018 will have home-field advantage in the conference.

The Niners are balanced, featuring a superb front four on defense, a game-breaking tight end in George Kittle, and more than enough moxie to add to the franchise's legacy of titles.

The Packers are a surprise No. 2 seed with a bye. New coach Matt LaFleur has melded his offense to fit Aaron Rodgers, running back Aaron Jones provides a terrific complement, and the free agency additions on defense, most notably the Smith Brothers (Preston and Za'Darius) , make Green Bay a very dangerous opponent.

“We’re going to be a tough team to deal with in the playoffs,” Rodgers said.

You certainly can say the same for the Saints, who had some crazy things happen in the last two years to keep them from claiming an NFL championship. If their defense finds its stinginess, the Saints could be unbeatable. Their offense is rolling, with Drew Brees seemingly in his prime at age 40, Michael Thomas an uncoverable receiver, and imaginative play calling that not only entertains, but can swing outcomes.

“When you look at the stretch of the past five or six weeks, the emphasis is how do we get better? How do we improve? How do we get ourselves in the best form going into the playoffs?” Brees said.

We'll say it right here: We've fallen for the Eagles.

Their resilience, perseverance, versatility seemingly with more regulars out injured than on the field is uplifting. No one has done a better job coaching with less to work with than Doug Pederson. The same can be said about quarterback Carson Wentz.

So we're not going to overlook them as they host a wild-card game.

“Guys are stepping up every day,"standout DT Fletcher Cox said. ``When a guy goes down, it just brings this team so much closer. When guys get chances, they've been taking advantage every time they get a chance and guys are playing at a high level.”

Like the Eagles, the Seahawks have been damaged by the injury bug. Now, they head to Philly in meeting of two overachieving teams that shrug at the odds.

Russell Wilson has had another great season — that's about all he's ever had — and Pete Carroll has rebuilt his defense quicker than anyone could have surmised.

One of the better wild-card entries of recent years — that just shows how top-heavy the NFC is — the Vikings could pull off a road win next weekend. They also don't instill much confidence because of their inconsistencies.