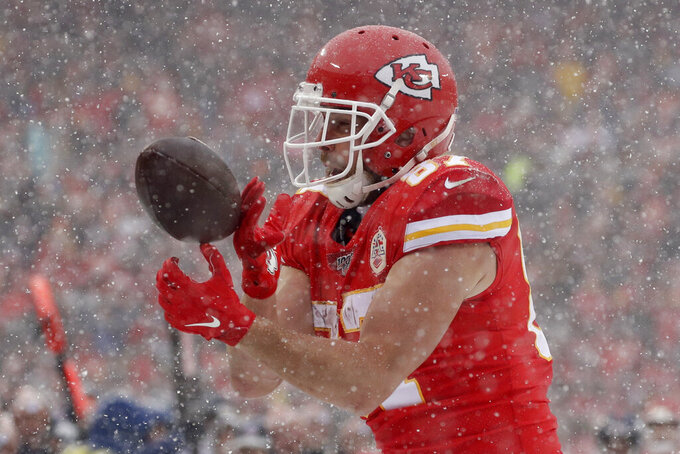 Kansas City Chiefs tight end Travis Kelce (87) can't hold on to the ball during the first half of an NFL football game against the Denver Broncos in Kansas City, Mo., Sunday, Dec. 15, 2019. (AP Photo/Charlie Riedel)

KANSAS CITY, Mo. (AP) — Travis Kelce has never cared much about individual statistics, even though the Kansas City Chiefs tight end has been putting up some eye-popping numbers ever since he arrived in the NFL seven years ago.

He's the consummate team-first player. The only number that matters to him is the number of wins.

Well, all those catches and yards and touchdowns that Kelce keeps piling up happen to be a big factor in the number of victories the Chiefs have accumulated over the years. Kelce caught another 11 passes for 142 yards in leading them to a 23-3 rout of the Denver Broncos on Sunday, allowing them to keep pace in the race for a first-round playoff bye in the AFC.

“Right now it's just a bunch of numbers. Honestly, I'm focused on winning games,” said Kelce, who became the first tight end in NFL history with four consecutive 1,000-yard seasons. “It being a team sport, the individual accolades, you know, I like to kind of push them aside and try to focus on how I can get better for my teammates.”

Get better? Maintaining his level of excellence is probably good enough.

Kelce has 1,131 yards receiving, which means he's closing in on another season that would rank among the top 10 in Chiefs history. The four seasons of 1,000 yards are matched only by tight ends Tony Gonzalez, Jason Witten and Rob Gronkowski — though none of them did it consecutively. And with 6,367 yards through his first seven seasons, Kelce has already shattered the NFL record for a tight end at this point in his career.

Making that last mark even more impressive is the fact that Kelce played one game and didn't catch a pass as a rookie. He underwent microfracture surgery on his knee and that delayed the start of his career. So really, he has more than 6,000 yards receiving in less than six full seasons, which puts him on pace with some of the league's best wide receivers.

Especially this time of the year. Some of Kelce's best games have come late in the season and in the playoffs, and the Chiefs (10-4) could use a few more of them. They need to win their last two games against the Bears and Chargers and hope for the Patriots to lose to get a first-round playoff bye.

The massive offseason overhaul that Kansas City undertook on defense is finally paying off. The Chiefs have limited their past four opponents to 20 points or fewer, and two of the past three have failed to score 10 points. The Broncos didn't surpass 200 yards until late in the game Sunday.

The Chiefs are still searching for some offensive balance. They ran 25 times for just 92 yards against Denver, and their longest run went for just 12 yards. That meager total is offset in part by screen passes, and the Chiefs should be a bit more potent once Damien Williams returns from his rib injury. But the Chiefs need to have more success on the ground.

Tyrann Mathieu and Juan Thornhill give the Chiefs perhaps the best set of safeties in the AFC. They were two of their three leading tacklers against Denver, Mathieu had a sack and nearly picked off several passes, and Thornhill made an interception in the end zone. They duo also combined to have three passes defensed.

Every time LeSean McCoy seems poised to have a breakout game, the veteran running back gets bottled up. He managed just 16 yards on six carries against the Broncos in the snowy conditions Sunday.

79.4: That was Mahomes' completion rate against Denver, the second best of his career. And he did it despite constant snowfall that made gripping the ball difficult for both him and his receivers.

Defensive end Alex Okafor hurt his chest after sacking the Broncos' Drew Lock in the first half. Offensive lineman Andrew Wylie left with a left ankle injury late in the game.

The Chiefs play their regular-season road finale in Chicago next Sunday night. If the Chiefs lose, expect them to rest their starters against the Chargers in Week 17 ahead of the playoffs. If they win, they will almost certainly play Mahomes and Co. against Los Angeles with the hope of leaping the Patriots for the No. 2 seed in the AFC.