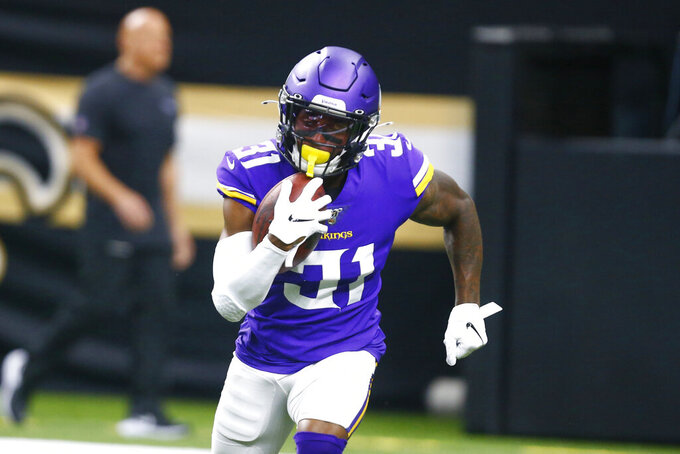 FILE - In this Friday, Aug. 9, 2019 file photo, Minnesota Vikings running back Ameer Abdullah (31) warms up before an NFL preseason football game against the New Orleans Saints in New Orleans. With rookie Alexander Mattison at the top of the candidate list and Ameer Abdullah returning after a late-season arrival last year, the Minnesota Vikings are looking for another running back to emerge as a reliable complement to Dalvin Cook. (AP Photo/Butch Dill)

EAGAN, Minn. (AP) — Mike Zimmer knows the potential and importance of running back Dalvin Cook to the Minnesota Vikings, so the coach is taking the cautious approach to Cook's workload during the preseason.

The advantage is two-fold: Cook stays fresh and injury-free, while the Vikings get a long look at a quartet of players who are trying to seize a vital spot as Cook's backup this season.

Ameer Abdullah is the veteran of the group, entering just his fifth NFL season. The Vikings drafted Alexander Mattison in the third round this year, and Mike Boone has been a preseason standout. The fourth option, De'Angelo Henderson, signed on July 24 after being waived by the New York Jets.

"I think the key with Matt and Abdulllah and those guys, they've got to have a role on the football team," offensive advisor and assistant head coach Gary Kubiak said.

"When Dalvin steps out of the game or takes his break, we have to continue to go. We can't be, 'OK, let's survive till Dalvin gets back.' We keep going forward."

Zimmer, who was mum on whether Cook would play Sunday against Seattle, and Kubiak had reason to be encouraged with the performance in the first preseason game last week at New Orleans. The team rushed for 213 yards, a single-game total the Vikings topped only once last season.

Boone had four carries for 70 yards, including a late 64-yard touchdown run. Abdullah ran the ball four times for 63 yards, including a 42-yard run. Henderson added seven rushes for 42 yards. Then there was Mattison, who had nine carries for 30 yards and caught a touchdown pass from Kirk Cousins as the first-team offense scored on its only possession.

"I'll try to say this the correct way," Zimmer said, before pausing. "I think Mattison has got a really bright future. I think the other two guys can help in change-of-pace situations. ... I think we feel like they all can run, they're all smart enough to run the offense and things like that, but it will come down to third downs and those areas."

Abdullah doubles as the top option on the current depth chart as the kickoff and punt returner. Mattison was drafted out of Boise State after he was second in the FBS in carries last season and rushed for 1,415 yards and 17 touchdowns.

"I'm not the person to ever be satisfied, so I know there's a lot more, way more that I could be on top of," Mattison said of learning the playbook. "But I'm definitely starting to get comfortable with the base stuff and starting to branch out into different things. Just trying to work at it every day."

The four players will look to fill a role as the complement to Cook and replace Latavius Murray, who signed with New Orleans after rushing for 578 yards and six touchdowns while starting six games last season.

Zimmer hasn't been shy about voicing his desire to run the ball more, after Minnesota ranked 30th in the NFL in rushing last season. The Vikings averaged 93.3 yards per game and were 27th in the league in attempts.

"They're not all going to be explosive runs, but the idea of sticking with it and having that mindset that we're going to pop one of these in there eventually," Zimmer said.