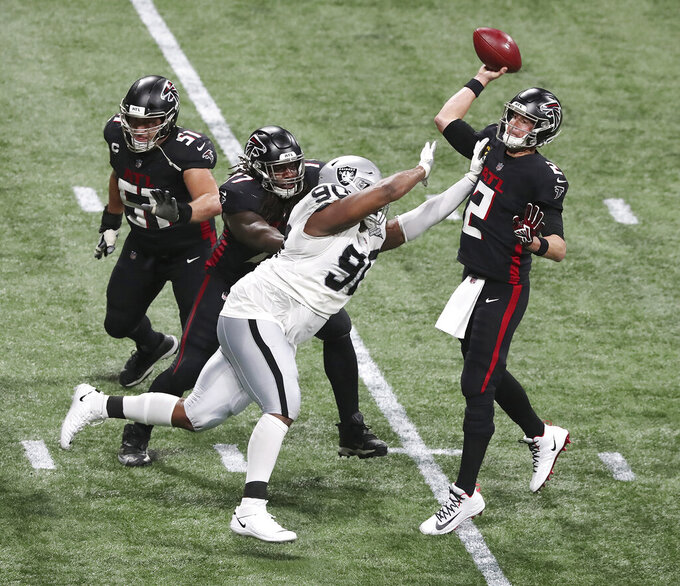 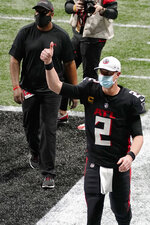 ATLANTA (AP) — After losing their first five games and firing the head coach, the Atlanta Falcons had every reason to throw in the towel on this season.

Give them credit for still showing up most every week.

The Falcons (4-7) are riding high after their best showing yet, a 43-6 dismantling of the Las Vegas Raiders that included standout performances from pretty much every phase of the team.

A season high in points. A season low for the opponent. Five turnovers created by the defense. Five field goals for Younghoe Koo, who has made 21 in a row and is increasingly proving himself to be one of the NFL's best kickers.

“We have a standard,” linebacker Deion Jones said. “Now, we’ve got to keep reaching it.”

It was Atlanta's fourth win in six games under interim coach Raheem Morris, who took over after Dan Quinn was dismissed, and it should be five out of six.

If Todd Gurley had only followed orders not to score a touchdown in the closing minutes against Detroit, the Lions wouldn't have had a chance to beat the Falcons on the final play.

“When you're 0-5, it's easy to turn on each other and point fingers at what went wrong,” Morris said. “That wasn't the case here. These guys adopted the 1-0 mentality. They bounced back, began forcing their will on the opponent and doing their jobs.”

Against the playoff-contending Raiders, Matt Ryan turned the page on his lowest-rated game since 2013 in the previous week's loss at New Orleans. He completed 22 of 39 passes for 185 yards, with a couple of short TD throws and an interception.

“You can't lose confidence,” Ryan said. “You can't let one loss turn into another. You've got to move past it and be confident."

That was certainly the case with the defense, which limited the Raiders to a pair of field goals. Derek Carr was sacked five times, fumbled three times and threw an interception that was returned for a touchdown by Jones.

The Falcons hope to carry that sort of defensive pressure to the final five games of the regular season.

”The guys were hungry," Jones said. “We talked about it, and it came to life.”

Ito Smith had 12 carries for 65 yards — both career highs — and should be a bigger part of the offense over the remainder of the season.

He broke off a 24-yard run and scored the Falcons’ final touchdown with an 8-yard scamper.

Smith had played sparingly since sustaining a serious concussion and neck injury that sidelined him for the final nine games of 2019. He came into Sunday’s game with just 13 carries for 46 yards.

“When somebody’s producing, they should get more opportunities,” Smith said. “Hopefully I do. That’s up to the coaches. I’m just going to keep doing my job.”

Even though the Falcons put up a season high in points, the offense could’ve been more effective at getting into the end zone.

Atlanta settled for field goals after recovering fumbles at the Las Vegas 21 and 27.

“We had a lot of short-field opportunities,” Ryan said. “We came away with a handful of touchdowns, but we can do a little bit better.”

Third-string defensive end Jacob Tuioti-Mariner had his best game with two fumble recoveries, one of which he also forced with a sack of Carr.

It was an unexpected performance from an undrafted player who has been waived twice by the Falcons and spent much of his three-year career on the practice squad and special teams.

“I love my journey,” Tuioti-Mariner said. ”I wouldn’t have it any other way. My journey has definitely taught me to work hard, keep disciplined, keep my head down and keep working.”

Defensive end Dante Fowler Jr., one of the Falcons’ big free-agent acquisitions of the last offseason, returned from the COVID-19 reserve list but wasn't much of a factor.

Fowler was credited with one pass breakup while Tuioti-Mariner and others provided the bulk of the pressure on Carr.

The Falcons played the game without two of their best offensive players, receiver Julio Jones (hamstring) and running back Gurley (knee).

Two other offensive players went down against the Raiders. Receiver Olamide Zaccheaus left in the first half with a toe injury, while left guard James Carpenter had to be carted off the field early in the fourth quarter after re-injuring his groin.

5 — The Falcons forced four fumbles and the interception that Jones returned 67 yards for a touchdown. It was most takeaways by the defense since the 2016 season against the Rams.

The Falcons go back-to-back at home Sunday when they take on NFC South-leading New Orleans for the second time in three weeks. The Saints (9-2) won the first meeting at the Superdome 24-9, sacking Ryan eight times.