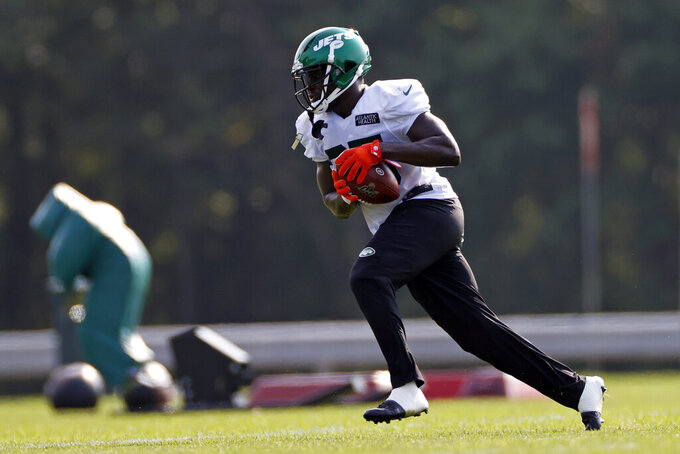 FILE - In this Aug. 25, 2020, file photo, New York Jets running back Frank Gore runs with the ball during a practice at the NFL football team's training camp in Florham Park, N.J. Gore took his first NFL snaps as a pro with the San Francisco 49ers in 2005 in what seems like a lifetime ago for the NFL’s third-leading rusher. It all comes full circle for the 37-year-old Gore on Sunday, Sept. 20, 2020, when his Jets host the team with which he began his career 16 years ago. (AP Photo/Adam Hunger, File) 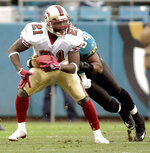 NEW YORK (AP) — Frank Gore took his first snap as a pro in what seems like a lifetime ago. And in the physical, not-for-long nature of the NFL, it might as well have been.

Mike Nolan was the coach of the San Francisco 49ers in 2005, with Mike McCarthy the offensive coordinator. Tim Rattay was the starting quarterback, with No. 1 overall pick Alex Smith waiting in the wings. Gore was a wide-eyed third-round pick running up the depth chart.

Meanwhile, somewhere in South Florida, current 49ers defensive end Nick Bosa wasn't even 8 and couldn't have had any idea he'd someday need to tackle Gore — who's still going strong at 37.

“He seems like an unbelievable dude, but he’s the enemy this week," Bosa said. "So (we) have to get after him.”

It all comes full circle for the ageless running back on Sunday when his New York Jets host the team with which he began his NFL career.

“I want to win, especially coming off a loss last week,” Gore said, referring to the Jets' 27-17 defeat at Buffalo. “I want us to look a lot better as an offensive team and that’s doing whatever it takes to win.

"It could be the 49ers, it could be Seattle, whoever. I just want to get a win.”

So, no, it's not a reunion tour for Gore, who isn't exactly reminiscing about the old times. With Le'Veon Bell on injured reserve with a hamstring injury, Gore is being asked to lead a banged-up backfield against a 49ers squad that's also 0-1 and looking to bounce back from a season-opening loss to Arizona.

Rookie La'Mical Perine could make his debut this week for the Jets after missing the past few weeks with an ankle injury. Newly signed Kalen Ballage might also be in the mix. But, it will likely be Gore who sets the tone for an offense that struggled mightily a week ago.

“I know that’s a big load with Le’Veon not playing this week and being out for a couple weeks,” said Gore, who signed with the Jets in the offseason. “But even when Le’Veon was here, I was always preparing like I was the guy just because you never know what happens. That’s why every day I go out on the practice field and prepare like I do.

“If my number gets called, I want to be ready.”

That has been Gore in a nutshell throughout his now 16 NFL seasons.

Teammates, coaches, fans and media have marveled at how the third-leading rusher in league history keeps himself in shape — physically and mentally — approaching the game with the enthusiasm and hunger of that 22-year-old kid in San Francisco all those years ago.

“I love Frank Gore,” said 49ers coach Kyle Shanahan, who remembers watching him at the University of Miami while serving as the offensive quality control coach at Tampa Bay from 2004-05.

Gore had 24 yards on six carries last week, giving him 15,371 for his career. That's 1,355 behind Walter Payton for second place on the NFL's all-time list.

That might seem an unreachable goal at this point, given Gore's age. But, he has no plans to retire anytime soon.

Sure, he might have a son playing football in college — Frank Jr. at Southern Miss — but the elder Gore has shattered expectations and conventional wisdom for years.

“He’s always got energy, he’s always coming back to the huddle telling everyone, ‘Great job, keep going, keep going,’” said Jets quarterback Sam Darnold, who was 8 when Gore ran for 608 yards and three touchdowns as a rookie. “He’s a really good piece for our offense and for the whole team. It’s good for our whole team to see a guy who's a future Hall of Famer, to be able to come out here and practice every single day with the same energy.”

Gore has often attributed that to understanding of how quickly the game can be taken away. He overcame multiple knee injuries in college and has been beating the odds since.

So, to see Gore on Sunday at 37 facing the franchise with which he spent his first 10 NFL seasons might amaze some. But, to those that know him — or still have to game plan against him — it's no surprise that he just keeps on going.

“When you turn on the tape, he’s still the same patient, physical, downhill running back that he’s been his entire career,” 49ers defensive coordinator Robert Saleh said. "I’m pumped for him that he gets to continue to live out his childhood dream and excited for us that we get the challenge to go tackle him.”