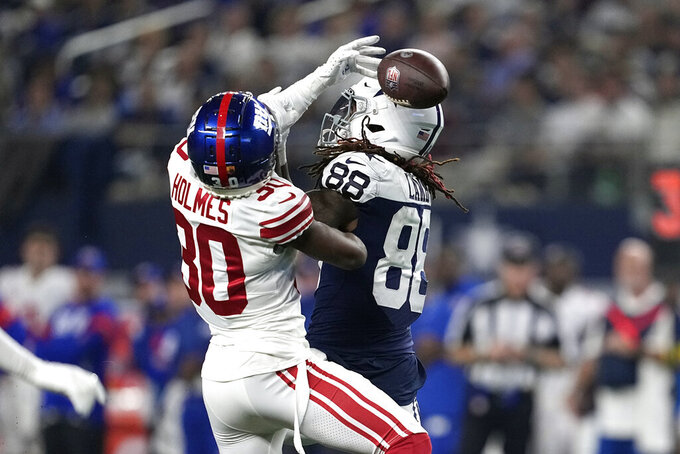 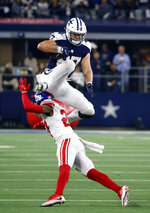 EAST RUTHERFORD, N.J. (AP) — The New York Giants are on their first losing streak under coach Brian Daboll and their hopes of making the playoffs for the first time since 2016 have taken a hit.

A couple of weeks ago, the Giants were in the driver's seat for one of the NFC's three wild-card berths. Things are getting iffy following losses to Detroit and Dallas.

The Cowboys are 8-3 after beating the Giants 28-20 on Thursday to sweep the season series and secure the head-to-head tiebreaker over New York.

The Giants (7-4) are in position for the second wild card, a half-game ahead of Seattle (6-4), which beat New York earlier this season and will face Las Vegas on Sunday. If the Seahawks win, the Giants would fall into the third wild card.

The up-and-coming team is the Washington Commanders (6-5). They have won five of six games and will face the Atlanta Falcons (5-6) on Sunday.

The next three games will be crucial for the banged-up Giants. They have home games against the Commanders on Dec. 4 and the Eagles a week later. They play at Washington the following week.

Daboll is looking for consistency from his team, which is what he has preached all season. It has been the Giants' best characteristic and has helped them find ways to win tight games.

“It’s easy to get down on yourself or get down as a team,” Daboll said Friday. “I think the important thing is to just keep the main thing the main thing.”

Daboll said there isn't an NFL team that doesn't think about making the playoffs in training camp. He added the ones that do are those that can focus week to week on the short-term goals that led to winning.

The former Buffalo offensive coordinator noted the Bills were 7-6 last season and won their last four to win the AFC East.

“We have a long way to go,” the rookie head coach said. “Obviously, the rest of December here and the early part of January. So, we have to focus on getting ready to play Washington, but you’re sitting at 7-4. You put yourself in a position to play meaningful games in December, which is important.”

Daboll's coaching. He refused to let the injuries be an excuse on Thanksgiving. His staff got the backups ready and the Giants were competitive for three quarters against the Cowboys. The team might be a little down but it will be ready for Washington, no matter who plays.

The running game. Saquon Barkley carried the Giants' offense for the first nine weeks of the season. In the losses to the Lions and Cowboys, New York rushed for 89 and 90 yards, respectively. Barkley, who was leading the league with 931 rushing yards heading into the Lions game, was held to a total of 61 yards in the two losses. He is still 8 yards shy of 1,000.

Rodarius Williams. The second-year cornerback had an interception, a tackle and two pass deflections in his first start.

Wink Martindale. With his secondary banged up, the defensive coordinator rolled out his full repertoire of blitzes to attack Dak Prescott and the Dallas offense. It left nickel cornerback Darney Holmes against wide receiver CeeDee Lamb and that was a mismatch. Lamb caught six passes for 106 yards.

CB Cor'Dale Flott suffered a concussion and left the game.

4 — The Giants are in the midst of playing four straight NFC East opponents, a run that will probably decide their playoff chances.