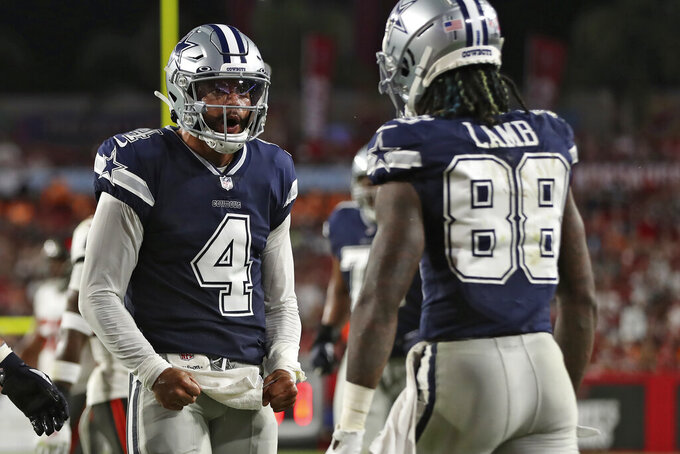 Dallas Cowboys quarterback Dak Prescott (4) celebrates with wide receiver CeeDee Lamb (88) after a touchdown against the Tampa Bay Buccaneers during the first half of an NFL football game Thursday, Sept. 9, 2021, in Tampa, Fla. (AP Photo/Mark LoMoglio)

LOS ANGELES (AP) — Chargers QB Justin Herbert found out less than a minute before last season’s Week 2 game against the Kansas City Chiefs that he would take his first NFL snap.

Nearly a year later, Herbert has emerged as one of the top young quarterbacks in the league, going into another big Week 2 game as Los Angeles hosts Dak Prescott and the Dallas Cowboys.

“I haven’t spent too much time looking back on that. I think we’re always looking forward,” Herbert said about the upcoming anniversary. “We have a great opportunity against the Cowboys on Sunday, and we’re doing everything we can to prepare to give ourselves a shot.”

Herbert and the offense delivered on expectations in last Sunday’s 20-16 victory over Washington that they would be better. He threw for 337 yards, a touchdown, and an interception, with his 31 completions going to eight players. The new-look offensive line also allowed only eight pressures and two sacks.

Herbert also directed an offense that made 14 third-down conversions and ran out the final 6:43 with a 15-play drive. He will face a Dallas defense that allowed 379 passing yards in its 31-29 loss to Tampa Bay.

The one area that Herbert will prioritize is ball security after the Cowboys forced three turnovers last week.

Prescott didn’t show any rust in his first game back from last season’s season-ending ankle injury. He threw for more than 400 yards for the eighth time in his career and tied a career high with 32 completions.

Prescott though isn’t looking at individual numbers. Most important to him is trying to help Dallas avoid dropping its first two games to open a season since 2010.

“You have to help your team out and do whatever it takes to get the win,” he said. “There’s a lot of plays in that game that I can go back and say I could have done better or I could have done this or that, that I think results in us winning the game.”

DEJA VU ALL OVER AGAIN?

The Cowboys could be without four starters from the Tampa Bay game, headlined by defensive end DeMarcus Lawrence being out at least six weeks after breaking a foot in practice Wednesday.

Receiver Michael Gallup strained a calf against the Bucs and is on injured reserve for at least three weeks. The day after the game, right tackle La’el Collins was suspended five games for violating the NFL’s substance-abuse policy. And Randy Gregory tested positive for COVID-19, leaving his status in doubt.

It’s an ominous start for coach Mike McCarthy after injuries marred his Dallas debut in 2020. Prescott didn’t play after Week 5 because of his broken right ankle. His top three linemen in Collins, left tackle Tyron Smith, and right guard Zack Martin didn’t play together last season and won’t do it this year before the seventh game.

THE GOOD NEWS FOR DALLAS

Martin will make his season debut. He missed the opener while dealing with COVID-19 symptoms for about a week. As with last year when the Cowboys had issues with injuries at both tackle spots, there is talk of moving Martin to right tackle and filling in at guard.

Last year, the Cowboys did that briefly, and Martin played well in his first action at tackle since his Notre Dame days. But he continues to make it clear he considers himself a guard.

“I think that was different circumstances last year,” Martin said. “I play right guard, and that’s what I’m going to do.”

Ezekiel Elliott had just 11 carries for 33 yards against the Buccaneers as the Cowboys appeared to have little interest in testing last year’s No. 1 run defense. But it was still an active game for the two-time NFL rushing champion. Elliott was solid as usual in pass protection, with several key blocks that helped Prescott complete passes, and McCarthy says he never complains about carries.

“If you know football, if you’re in this building, you can tell someone can have a solid game without having the best statistics,” Elliott said. “If you’re the one that’s saying that, then you probably should study a little more.”

THE HEAT IS ON

The Chargers’ defense put consistent pressure on Washington’s quarterbacks last week, but they could be in for a more formidable challenge on Sunday, facing a Dallas offense with many playmakers.

Los Angeles got pressure on eight of 26 Washington drop-backs last week, but it might be hard-pressed to equal that against Dallas.