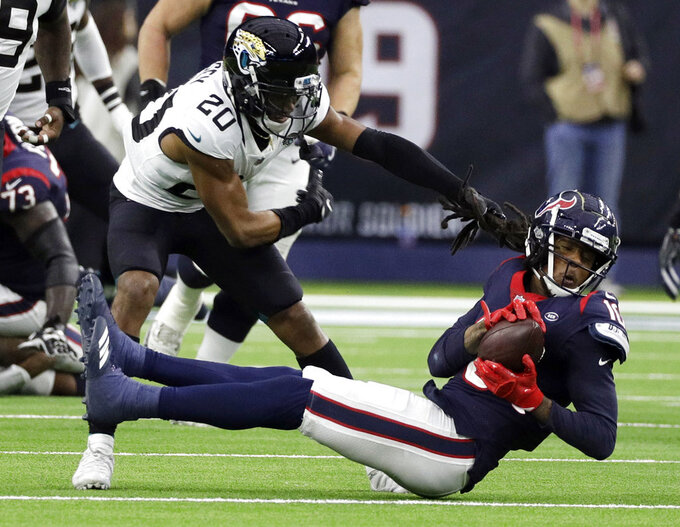 HOUSTON (AP) — DeAndre Hopkins had the best season of his career, carrying Houston's receivers in a year the group was decimated by injuries.

Now the self-described best receiver in the NFL will need another big performance for the Texans to get a win over the Colts in the wild-card game on Saturday.

"I feel like I'm a leader of this team, not just this offense," Hopkins said. "I was named captain, so for me to go out and play my best game is important, not just for me but for this team."

Hopkins finished the regular season with a career-high 1,572 yards receiving, which ranked second in the NFL, and his 115 receptions tied a franchise record set by Andre Johnson in 2008. His 11 touchdown receptions were fifth in the league and tied for the second most in his career after he grabbed a franchise-record 13 last season.

His performance comes in a season when the Texans lost starting receiver Will Fuller to a torn knee ligament in October, and Demaryius Thomas to an Achilles tendon injury two weeks ago. Houston got solid production from Keke Coutee midway through the season, but the rookie has missed the last five games with a hamstring injury, leaving Hopkins to carry an even bigger load than usual.

Coach Bill O'Brien is wowed by the sixth-year player nearly every day, and when asked about him this week he noted Hopkins had just made a nifty one-handed grab in practice a few minutes earlier.

"He just has a great skill set, really smart player, excellent competitor, can really make the contested catch, he can line up inside, he can line up outside, he can do a lot of different things, and he's come up real big for us," O'Brien said. "He has 115 catches and they've all been important catches. He's a leading third-down target. ... He always impresses me."

He's so good and consistent that second-year quarterback Deshaun Watson admitted he's tempted to throw it to him on every play.

"For sure," Watson said. "Usually he's going to make a play happen regardless if you think he's open. If he's not open, he's open."

Hopkins has a knack for making catches at key moments, with 81 of his 115 receptions resulting in a first down or a touchdown. And an even more impressive statistic, according to Pro Football Focus, is that he does not have a single drop this season on catchable targets.

After that statistic was released, a meme featured a picture of Hopkins with a bottle of glue in one of his hands bearing a label that read: 'Hopkins' Catch-All Multi-Purpose WR, extra strong formula, no drop.' Hopkins was amused by the meme and his tweet of it received more than 68,000 likes.

But he said he's more concerned about being consistent than the fact he hasn't dropped a ball all season.

"That's my goal every day. Being consistent, not just on the football field but in life," he said. "Playing football is something I love doing, and being named as one of the best is something that I work hard for because I think everybody wants to be the best at their position. Otherwise why would you play your position? So, to get that recognition from whoever made that, that was pretty cool ... I know that if I don't drop a ball, it's going to lead to something good."

Watson didn't have to play with Hopkins long to realize he wasn't like most receivers and that his skills could help make up for some of the young quarterback's mistakes.

"I found that out last year when I was throwing to him. It's ridiculous," Watson said. "My first start in Cincinnati last year, some balls there I kind of threw high. Some stop routes. I'd come over and be like: 'Hey, it's my bad. I'm going to get it down,' and he was just like: 'No, I want it just like that. I want it high. I want it outside. I want it low,' and he just found a way to get it."

His production this season is even more impressive considering he's been hampered by minor injuries, but still started every game. While those injuries never kept him out on game day, they limited his practice time, which he acknowledges was difficult.

"It's been challenging not being able to practice with my guys like I want to, being out there, just having fun with the fellas," he said. "That's why I look forward to coming to work every day, just being around my teammates, not just going out there and making plays on Sunday.

"It's been challenging from that aspect, but it's been good," he continued. "My play has correlated to us winning games, so I feel like me personally, this is my best season. We won the division. Best record I've had since I've been here yet."

And now Hopkins and the Texans will try to build on that success as they chase their first championship.