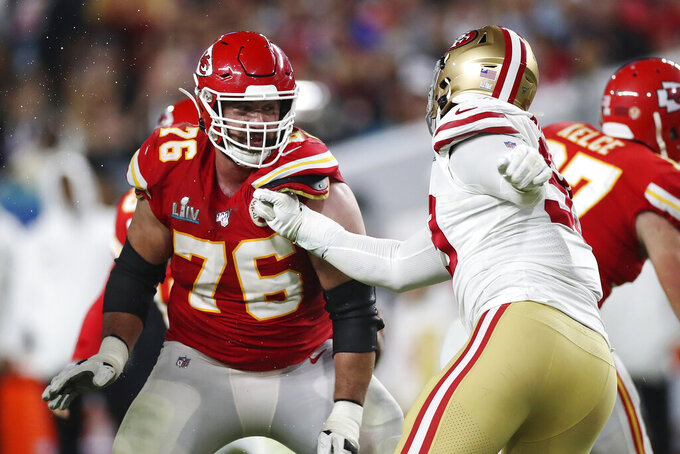 Duvernay-Tardif, a licensed medical doctor who opted out of last season to work on the front lines in the battle against COVID-19, was active for the first time Monday night for the Chiefs' 20-17 win over the New York Giants but didn't play. He broke a bone in his right hand during training camp and was sidelined several weeks.

Duvernay-Tardif wrote in a Twitter post: “NYC here we come!” He could serve as a backup to starter Greg Van Roten at right guard, or potentially replace him at the position.

“I believe strongly in what they are building,” Duvernay-Tardif said of the Jets, "and I am very thankful to be a part of it.”

The 30-year-old offensive lineman from Quebec, Canada, was a sixth-round pick of the Chiefs in 2014 out of McGill University in Montreal. He has played in 60 NFL games, including 57 starts, and was the starting right guard for Kansas City in its 31-20 victory over San Francisco in the Super Bowl during the 2019 season.

“It's an opportunity to bring a Super Bowl champion to the room,” Jets general manager Joe Douglas said. "LDT brings that championship pedigree. He's a high-character person and obviously a very smart guy and can't wait to get him in here and see him compete.”

Duvernay-Tardif thanked the Chiefs organization and fans in his post for their support “throughout my whole career to pursue both medical school and pro football, my two passions.” He added that saying goodbye to Kansas City was a difficult decision.

“When I opted out last year, I promised myself to do everything in my power to come back on the field,” Duvernay-Tardif wrote. “Joining the Jets gives me the best opportunity to play.”

Brown has spent the past three seasons with the Jets, primarily as a blocking tight end and core special teamer. He has 44 career receptions for 420 yards and two touchdowns in seven NFL seasons.

The 29-year-old Brown was signed by Baltimore as an undrafted free agent out of James Madison in 2015 and also played with Chicago before joining the Jets in 2019.

The Jets, who are 2-5, were considered possible sellers at the deadline — with safety Marcus Maye and wide receiver Jamison Crowder often mentioned in trade rumors. But both remain in New York, and the deal to acquire Duvernay-Tardif was the only trade involving the Jets on Tuesday.

Maye is playing on the franchise tag this season after he and the team couldn't reach an agreement on a contract extension in the offseason. The safety has said he'd like to remain with the Jets, who could franchise him again next offseason. Maye is also dealing with legal issues stemming from his DUI arrest in Florida in February.

Douglas, who called Maye a priority last offseason, was non-committal about re-signing him saying the Jets will see how the season plays out.