Jets' Becton out to make critics, doubters 'eat their words' 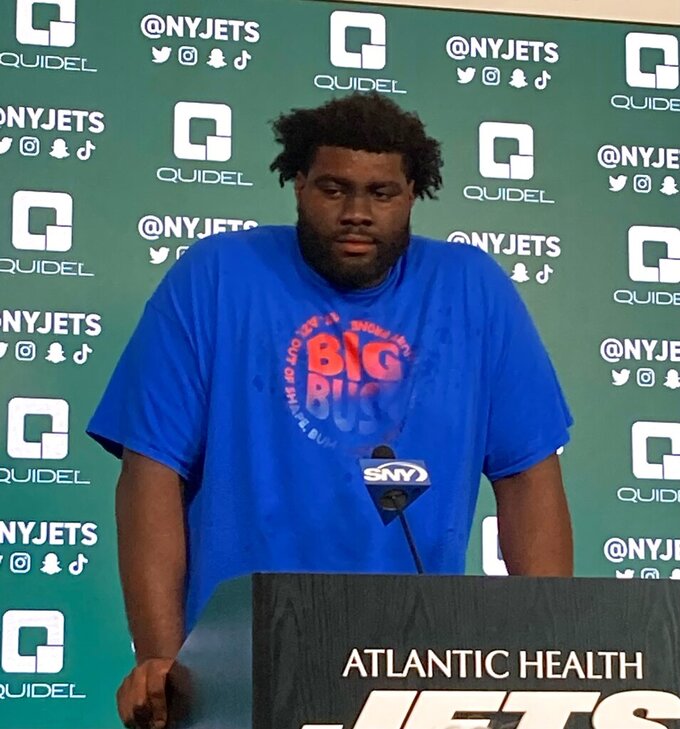 New York Jets offensive tackle Mekhi Becton speaks to reporters at the teams NFL football facility in Florham Park, N.J., Wednesday, June 15, 2022. The offensive tackle knows he is being written off by many, but insists he's going to make all of his critics "eat their words."(AP Photo/Dennis Waszak Jr.)

Words such as “fat,” “lazy,” “out of shape,” “injury prone,” “overweight” and “bum” formed a circle of criticisms around the eye-catching capitalized “BIG BUST” in the middle.

“A lot of words I’ve been called my whole life," the New York Jets offensive tackle said Wednesday. "So I put it on a shirt.”

Yes, Becton has heard his naysayers. He has read their comments on social media. And he knows some have already written him off.

“Yeah, and I don’t understand why,” Becton said while shaking his head. “It’s all good, though. I’m going to make them eat their words.”

While much of the focus for the Jets is on the progress of second-year quarterback Zach Wilson, the team's most intriguing player is perhaps Becton.

The No. 11 overall pick out of Louisville in 2020 had a promising rookie season as a punishing blocker whose size — 6-foot-7 and 363 pounds — and speed made him a potential jumbo-sized superstar. But Becton struggled last year with a foot injury before training camp, then had to learn a new offensive system under coordinator Mike LaFleur before a knee injury wiped out his season in Week 1.

Becton dislocated his right kneecap and sprained his MCL, injuries that at first were expected to sideline him several weeks. But that turned into months and eventually the entire season. George Fant stepped in and played well, and suddenly Becton's role on the team has become uncertain.

“It was really just a lot of adversity,” Becton said. “Just a lot to come from, trying to become better from what you did in your rookie year and just to get hurt and be out all season, it's a lot. It's a lot to handle. But I'm definitely coming back with that chip on my shoulder.”

When the Jets reconvened for the voluntary offseason program in April, Becton remained in the Dallas area to work with his own crew of trainers — while remaining in touch with the team — and be with his fiancée, who recently gave birth to their first child. The sharp criticisms of Becton have since increased from outside the facility.

“It just adds fuel to the fire, honestly,” Becton said in his first meeting with reporters since last September. “That’s all it does.”

This is officially comeback season for the man whose Twitter username is fittingly “Trending Topic.”

“I'm feeling good physically,” he said. “Ready to go out there and play.”

Becton spent the two mandatory minicamp practice sessions in the trainers area, working out and doing some light running with other players coming back from injuries. He said his knee is regaining strength and he expects to be ready to practice fully when training camp begins in late-July.

Becton's weight has fluctuated during his brief NFL career, reportedly hitting 400 pounds at one point. He's listed at 363, but both Becton and Saleh declined to reveal what the offensive lineman's weight is now.

“I'm not saying numbers right now,” Becton said. “I'm satisfied where I'm at, me and the coaching staff.”

That doesn't mean he's currently at his optimal playing weight, of course. And even that is cause for some debate.

“Mekhi is so special in that sense — that's why he's got the talent he has because he can be as quick and athletic as he is at the size other people couldn't even come close to handling,” offensive line coach John Benton said. “Your prototypical guy who's playing at 360 or 370 (pounds) would really struggle in this offense, but Mekhi is not in that vein. ...

"That's the type of thing I really look for: Is he moving great? I don't really care if he's 380 or 340, for that matter, if he's moving well enough and doing those types of things."

The Jets still have high hopes for Becton, despite him playing just 15 of 33 games in his first two seasons.

“We’re all aware of the talent he possesses, the size, the athleticism, the physicality, all of it and he’s really smart,” Saleh said. “If he takes care of business like we know he can, he can be transcendent.”

Saleh has already said Becton and Fant will compete to be the left tackle this season, with the “loser” of the competition shifting to the right side. Fant has already proven he can play both spots in the NFL, while right tackle would be new for Becton at this level.

“It’s football,” Becton said. “We’re always going to compete no matter what. I’ll just have to go out there and get my job back.”

And if he can recapture the success he had as a rookie, the Jets' offensive line could be a much-improved unit this season.

With their biggest guy up front leading the way.

“I'm coming back to try to be the best I can be," Becton said. "It's as simple as that. I'm not going to sit here and say like, ‘I’m going to get this accolade or get that accolade.' I'm just going to go out there and be the best that I can.”