Jets' Kalil closer to playing, feeling 'like my old self' 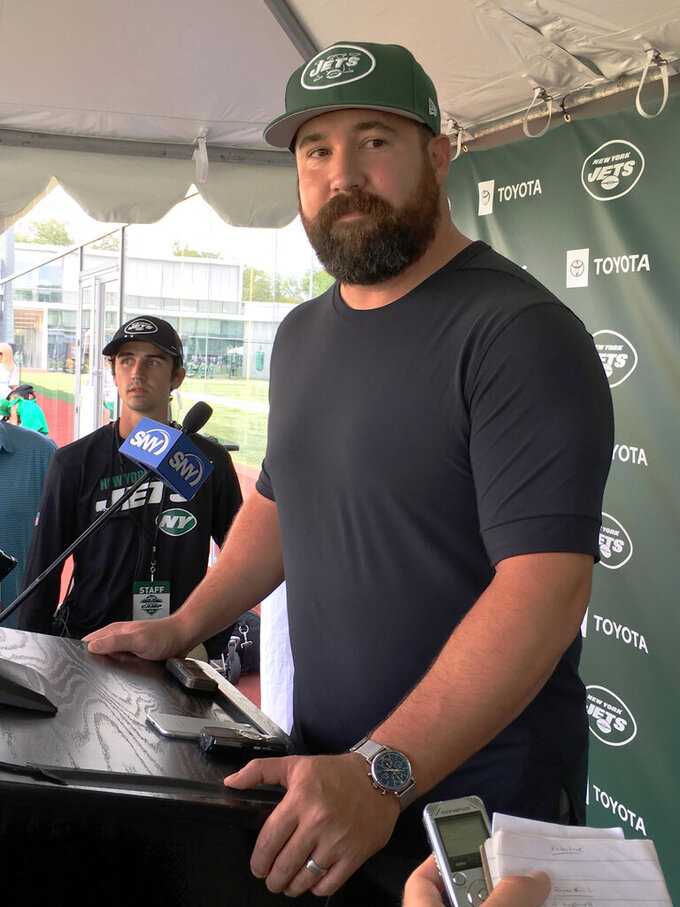 FILE - In this Saturday, Aug. 3, 2019 file photo, Ryan Kalil was introduced after signing a one-year deal with the New York Jets at the Jets' facility in Florham Park, NJ. Ryan Kalil has had one whirlwind of a month. From retirement to a new team in a new city with new teammates and coaches in just four weeks. And, now, the New York Jets center is nearly ready to play again. “I feel like I'm getting my legs back,” Kalil said Tuesday, Aug. 27, 2019. (AP Photo/Dennis Waszak, File)

From retirement to a new team in a new city with new teammates and coaches. And, now, the New York Jets center is nearly ready to play again.

"I feel like I'm getting my legs back," Kalil said Tuesday, "and feel like my old self."

The 34-year-old Kalil walked away from football after last season, his 12th with the Carolina Panthers. He was convinced he was done with the game — until the desire to play again began gnawing at him during the winter.

It all led to Kalil signing a one-year deal with the Jets earlier this month, and began a process to him getting back on the field in a game. It nearly happened last Saturday night against New Orleans, but instead it will wait until the regular season.

"We were talking throughout the week whether we're going to play or not," he said. "Just, last minute, we just decided just to give me more time — more so mentally than physically."

The last few weeks have been all about Kalil getting back into football shape and learning the terminology of coach Adam Gase's playbook.

"I didn't take that much time off," Kalil said. "It wasn't like I was (Dallas tight end) Jason Witten, took off a year and came back. So, just being able to play fast, feel comfortable with the playbook. You know, it's easier when it's in a more controlled environment (in practice) and you can call timeout because you're not quite sure what the play is but in a live game situation, that's not OK."

Kalil, who made five Pro Bowls with the Panthers, is confident that by the time the regular season kicks off on Sept. 8, he'll be where he needs to be mentally, as far as having the plays down.

When asked if he has second-guessed his decision at any point so far during his comeback, Kalil insisted he hasn't.

"No, those moments came in the offseason and that's why that's why I'm here," he said. "So, no, listen, I'm fired up to be here. I'm excited and, obviously, I just want to do well. It's important to a lot of guys in this locker room and, you know, I don't want to let them down."

Kalil watched from afar over the weekend when Indianapolis quarterback Andrew Luck stunningly retired while still in his playing prime. He could empathize with Luck, having gone through a similar experience when he asked himself if it was time to step away from the game.

"Listen, I can relate more than anybody, I think," Kalil said. "I understand where he's coming from. It's hard. You get stuck in a scenario where you don't feel quite like yourself."

Kalil made his initial decision to retire entering last season, playing all 16 games with the intention of it being his farewell to football.

"I was going into that season feeling like my old self and then I stayed my old self throughout that year," he said. "So it's a little bit different of a situation. Sounds like from what I've been hearing, it was probably a little bit worse (for Luck) than people think, so, I get that. I mean, I get him not wanting to be stuck in that again because it's hard, it's hard physically. And it's definitely hard mentally."

"The more practices we can get under our belts the better, between this one and then when we kind of get going again next week," Gase said. "It's a good first step for us. It seemed like it was pretty smooth."

Kalil won't play in the preseason finale Thursday night against Philadelphia, and neither will most of the Jets' starters, including quarterback Sam Darnold. That's nothing new for Kalil, who played only sparingly in the preseason for the Panthers the last few seasons and said he always felt "fine" going into the regular season without a lot of game action in the summer.

"That's why we should just get rid of the whole preseason thing for older guys, you know?" Kalil said with a big grin. "Just make it all young guys."

NOTES: WR Robby Anderson is dealing with a calf issue that kept him out of practice. "I don't know if it's a concern," Gase said. "Any time you have a soft tissue, it's an unknown. That's why it's day to day." ... CB Trumaine Johnson (hamstring) returned to practice after being sidelined the last few weeks. ... S Brandon Bryant is in the concussion protocol after being injured against the Saints. ... S Rontez Miles is dealing with a hip ailment.