No Thursday game doesn't make the pickings any easier 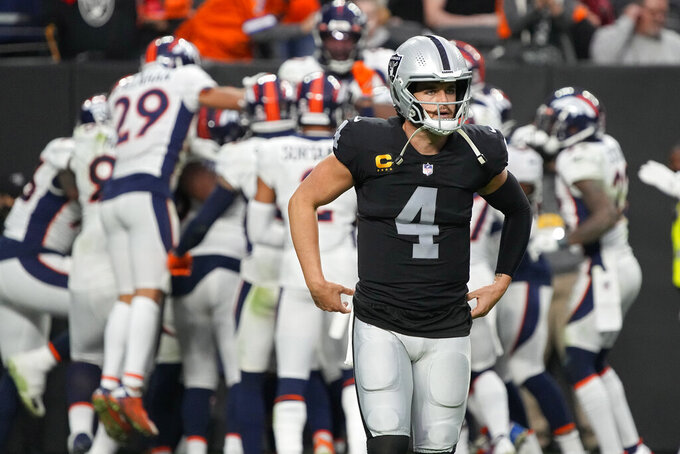 Las Vegas Raiders quarterback Derek Carr (4) walks off the field after his pass was intercepted by the Denver Broncos during the first half of an NFL football game, Sunday, Dec. 26, 2021, in Las Vegas. (AP Photo/Rick Scuteri)

Playoff scenarios will dominate Week 17, which used to be the finale for the regular season. Now, with a 17th game added to the schedule, there are postseason implications nearly everywhere.

Among the most intriguing matchups involving two clubs not into the Super Bowl parade but on the fringes will take place in Indianapolis on the only Sunday with 15 NFL matches all year. The Raiders (8-7) and Colts (9-6) go at it.

Indy can actually clinch with a victory; there also are machinations that get the Colts in with a tie. Pro Picks ignores ties.

“We understand that and we know what’s at stake,” Colts two-time All-Pro linebacker Darius Leonard says. “We know we have to come out and play our best ball against these guys. We have to come in and we’ve got to play four great quarters of football if we want to make a playoff push.”

The Raiders will advance if they win out.

“We have two games left against two really good football teams and we need to win them,” quarterback Derek Carr says. “If we do and we get in, I think that would be pretty remarkable. I think that would be pretty amazing. But it falls in line with what our plans were at the beginning of the year and despite all the adversity, to be able to still stare your goals in the face and have an opportunity to obtain them, it’s pretty cool.

“But none of it matters unless we take care of business on the road here against the Colts.”

KNOCKOUT POOL: Philadelphia kept the ball rolling, and for the penultimate week of any such pools, we’d suggest SAN FRANCISCO if even without Jimmy G at QB.

Two coaches on hot seats. A win for Chicago might not help Matt Nagy.

There's no upset Pro Picks feels strongly about, but we have to pick one — and our record has been pretty special.

The Packers have had issues holding bigger leads late in games. That ends Sunday night.

Two wins on the road will give the Chiefs AFC home-field advantage.

Arizona's offense has stagnated. Dallas had the same issue, but has awakened.

Injury-ravaged Baltimore's plummet will dump it out of the playoffs.

Buffalo's road to the AFC East crown includes home games with the Falcons and Jets.

New England likes to pour it on against weak teams.

Tom Brady loves to pour it on against the Jets.

Tennessee has a shot at AFC home-field advantage, but the Dolphins are a resilient bunch.

Philly's surge toward the playoffs could pay off with a victory here.

Looks like a Lock that Denver QB Drew will be gone for 2022.

Rookie QBs Troy Lance for the Niners vs. Davis Mills for the Texans?

The Seahawks are the league's most disappointing team.

An impossible game to pick, but New Orleans is a bit healthier than last week.