Pass-happy Wilson-led Seahawks ready to wing it in Buffalo 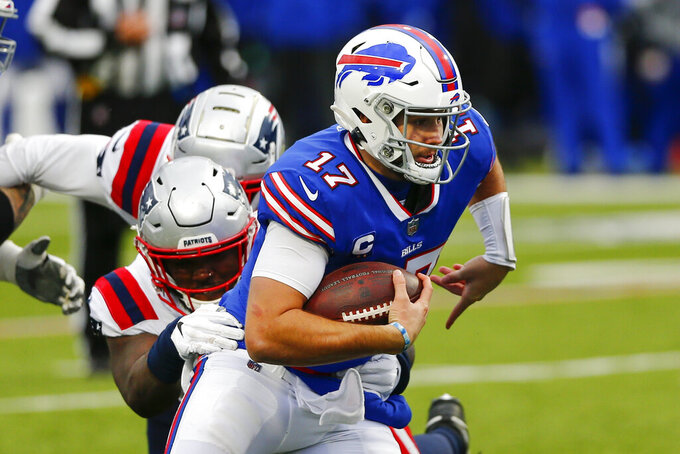 Though the Seahawks might have Wilson throwing more, the quarterback doesn’t appear any less than the dominant player Jefferson got to see up close during his previous four years in Seattle.

“To be honest, it’s been what he’s been doing,” Jefferson said as the Bills (6-2) prepare to host the Seahawks (6-1) in a non-conference showdown of division leaders Sunday. “I don’t know if it’s just the media giving him more coverage this year, but I feel like it’s Russ.”

Wilson has stepped his game to another level by firmly thrusting himself into the NFL MVP conversation at the midseason mark.

His 26 touchdown passes and 120.8 passer rating lead the league, and he ranks third with a 71.5 completion percentage and sixth with 2,151 yards passing.

For someone who has never won an MVP honor, Wilson’s career-long consistency is evident in how he’s in position to become the NFL’s winningest quarterback through his first nine seasons. His 92 regular-season wins are tied with Peyton Manning over that span, while his 101 wins, including playoffs, match the record set by Tom Brady.

“He’s the best he’s ever been because he’s the most experienced he’s ever been,” Seahawks coach Pete Carroll said of Wilson's development. “He’s been able to grow and grow and grow, and he has total command of the game right now.”

The Seahawks have needed almost every bit of Wilson’s production overseeing an offense averaging an NFL-best 34.2 points per game, to offset a porous defense which ranks 24th in the league in allowing 28.4 points an outing.

Difficult as it might be for the Bills defense to contain Wilson, the emphasis is on their Josh Allen-led offense to rediscover its early season groove.

One reason behind the drop in production is how opposing defenses have begun protecting against getting beaten deep, forcing Allen to play with more patience in overseeing lengthy scoring drives.

Compounding Buffalo’s troubles was a pedestrian running attack which appeared to finally find its legs in generating a season-best 190 yards rushing and accounting for all three touchdowns in a 24-21 win over New England last weekend.

Defensive end Carlos Dunlap is expected to make his debut for Seattle after being acquired in a trade from Cincinnati. The Seahawks hope Dunlap can apply more pressure with Seattle ranking in the bottom third of the league with 12 sacks.

Dunlap's addition would also reduce Seattle having to blitz linebacker Bobby Wagner, who earned NFC defensive player of the week honors with 11 tackles and two sacks in a 37-27 win over San Francisco last weekend. Not that Wagner minds.

“I’m all for blitzing,” Wagner said. “I’m always telling them to blitz me more, but I do whatever the coaches tell me to do.”

The game is another measuring stick for a Bills team leading the AFC East through Week 8 for the first time since 1996, but has come up short against the league's elite.

Buffalo’s six victories, including two against the winless Jets, are against opponents with a combined record of 15-30. The Bills' two losses are against Kansas City (7-1) and Tennessee (5-2).

“That’s a scary thought because Patrick Mahomes is pretty impressive, but Russell is off to a great start,” Frazier said.

Buffalo was effective in limiting Mahomes to 225 yards passing and two scores, but was burned in allowing 245 yards rushing, including 161 by rookie Clyde Edwards-Helaire.

Wilson has never thrown a pass at Bills Stadium after Seattle's previous road game at Buffalo was played at Toronto during the quarterback's rookie season in 2012. That doesn't mean he hasn't visited.

The Bills expressed interest in selecting Wilson, and brought him in for a pre-draft visit.

“It was a cool place. They love football, that’s for sure,” said Wilson, who scored a career-best three touchdowns rushing and added one passing in a 50-17 win over Buffalo in Toronto.

Carroll has mixed memories of Buffalo.

“I was always told the hardest thing to happen to a coach is you get in the NFL for one year and you get let go, you may never get back,” said Carroll, who spent the next five seasons coaching defensive backs in Minnesota. “But I’m really glad I was there because it was a unique place and I enjoyed that first opportunity.”.

Buffalo is also where Carroll earned his first win as head coach with the New York Jets' season-opening 23-3 victory in 1994.