Patriots' path to division title shrinks after loss to Bills 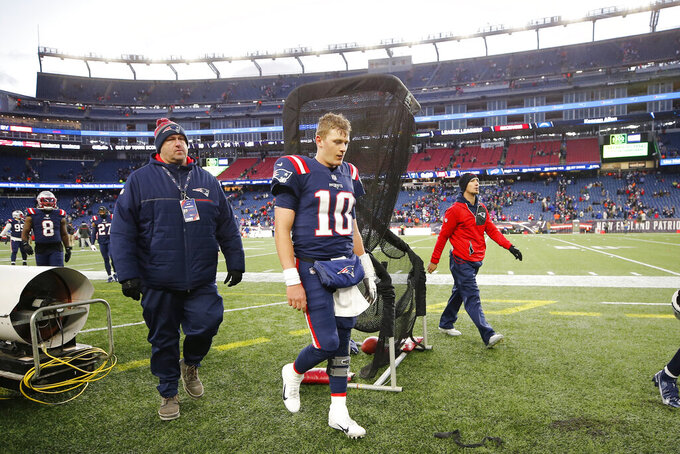 FOXBOROUGH, Mass. (AP) — The New England Patriots survived a 1-3 start to put themselves within a victory of reclaiming the division throne, the one they surrendered to the Buffalo Bills a year after Tom Brady’s departure.

The Patriots, who lost 33-21 to the Bills on Sunday, have little margin for error over their final two games against the Jaguars and Dolphins if they want make it back to playoffs in a tight AFC postseason race.

Though the Patriots and Bills now both sit at 9-6, Buffalo holds the tiebreaker because of a better win-loss record within the division. If the Bills win out, they’ll win the division title.

“It’s basically all playoff games from here on out,” Patriots safety Devin McCourty said. “If we don’t finish the way we need to finish, we’ll be at home.”

For the second consecutive week, mistakes and undisciplined play in key moments cost New England the game. It contributed to a lackluster day for the offense, which finished with only 288 yards and was just 1 of 8 on third down.

“Kind of a little bit like last week,” coach Bill Belichick said. “We have to find a way to do better.”

Rookie quarterback Mac Jones was able to follow the lead of the run game in New England’s Week 13 win at Buffalo, attempting just three passes on that cold, wet and windy night. He was forced to do more in Sunday's rematch and struggled, going 14 of 32 for 145 yards with a pair of interceptions. He has six picks over the last four games.

While there were multiple drops by New England’s receivers on Sunday, Jones said he didn’t feel like he set the right tone.

“I can lead a lot better,” he said. “It starts with me, so we’ll just have to look in the mirror and address what we can and just keep working to get better every day."

The Patriots’ defense also was unable to contain Bills quarterback Josh Allen like it did previously, allowing him to pass for three touchdowns while avoiding an interception for the first time in three games. Allen was without key receivers Cole Beasley and Gabriel Davis, both sidelined on the reserve/COVID-19 list, but had receiver Isaiah McKenzie, who beat second-year cornerback Myles Bryant for several long gains to finish with career highs in catches (11) and yards (125) and a touchdown.

When Allen wasn’t picking the defense apart through the air, he was keeping drives alive on the ground, leading the team with 12 carries for 64 yards.

There were also uncharacteristic mental mistakes by the Patriots, such as right tackle Trent Brown getting called for an unsportsmanlike conduct penalty late in the second quarter with his team in a 17-7 hole and trying to close the gap before halftime.

Center David Andrews also was called for a taunting penalty in the fourth quarter, that fortunately was offset by a flag on the Bills.

“It’s our own fault. There is no one to blame except for us,” Andrews said. “That is what it is, can’t change it now, got to get back to work tomorrow.”