Pats' Andrews has no restrictions after blood clots issue 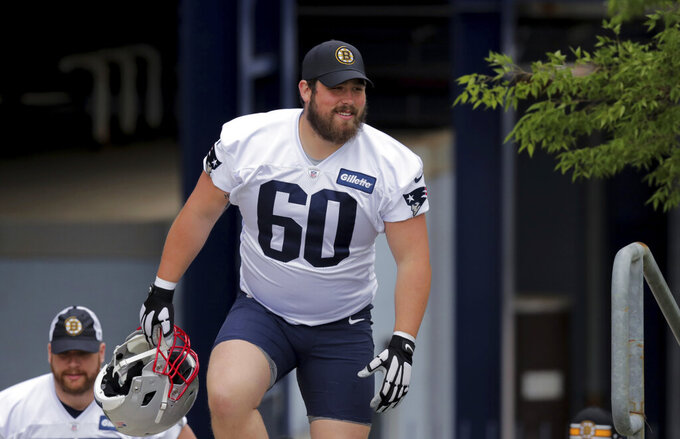 FILE - In this May 23, 2019, file photo, New England Patriots center David Andrews (60) heads to the practice field during NFL football training camp in Foxborough, Mass. Andrews says he believes the blood clot issue in his lungs that caused him to miss the 2019 season was a freak occurrence that he’s ready to put behind him. (AP Photo/Charles Krupa, File)

BOSTON (AP) — Patriots center David Andrews says he believes the blood clot issue in his lungs that caused him to miss all of last season was a “freak accident” that he’s ready to put behind him heading into the 2020 season.

“It was definitely a very interesting situation. I’m very fortunate that I am able to continue playing this game,” Andrews said Tuesday during a conference call with reporters. “I’m just really looking forward to moving forward and getting back to being a football player again.”

Andrews declined to elaborate on what caused the issue but said he has been cleared by doctors to resume playing football.

“You can’t live your life in fear of whether it's gonna happen again or not,” he said.

The 27-year-old currently isn’t on any workout restrictions and said he was limited in 2019 mainly because of the medication he was taking to treat the clotting issue. He has since discontinued the use of that medicine.

“I can go about living my normal life and the recurrence thing is something that unfortunately you can’t really pin down,” Andrews said. “I’m just gonna keep going about my life and keep playing this game and doing what I can to stay as healthy as I can.”

Signed in 2015 as an undrafted free agent out of Georgia, Andrews has played four seasons for New England. Until last season he had been one of the most durable members of a core offensive line that includes right guard Shaq Mason, right tackle Marcus Cannon and left guard Joe Thuney.

Andrews started all but seven regular-season games from 2015 through 2018 before sitting out 2019 after the lung issue was discovered during training camp.

He is entering the final season of a three-year, $9 million contract extension he signed in 2017.

Ted Karras filled in for Andrews last season but left in free agency to join the Dolphins. The Patriots added some depth in the draft, selecting former Michigan center Dustin Woodard in the seventh round.

But if he stays healthy, the center job will be Andrews’ to lose. In 2018, his second season as a team captain, he started every game and participated in 99% of the offensive snaps.

That experience will be key as Andrews prepares to play his first NFL season without Tom Brady as the Patriots starter at quarterback.

Andrews has worked with both current options on the roster in second-year player Jarrett Stidham and veteran Brian Hoyer.

Even during his absence from the field last season, Andrews was a fixture in the locker room and team meetings. Off the field, he made it a point to spend time with Stidham.

“I’ve had a lot of experience with Brian, he’s been around for a while,” Andrews said. “I went all last spring with Jarrett and six weeks of training camp. ... There’s always a new challenge in the NFL.”

If Stidham does eventually get the starting job, Andrews said he is confident he will be ready for it.

“Jarrett is a great kid,” Andrews said. “Whatever quarterback’s in that room I try to build a bond with them. Whether it’s Jimmy (Garoppolo), Brian, Danny Etling. Whoever’s in there you try to build a bond because it’s obviously one play away from anyone playing. That’s just the way it is.”