Pats' Jones plans to be ready for Steelers after back injury 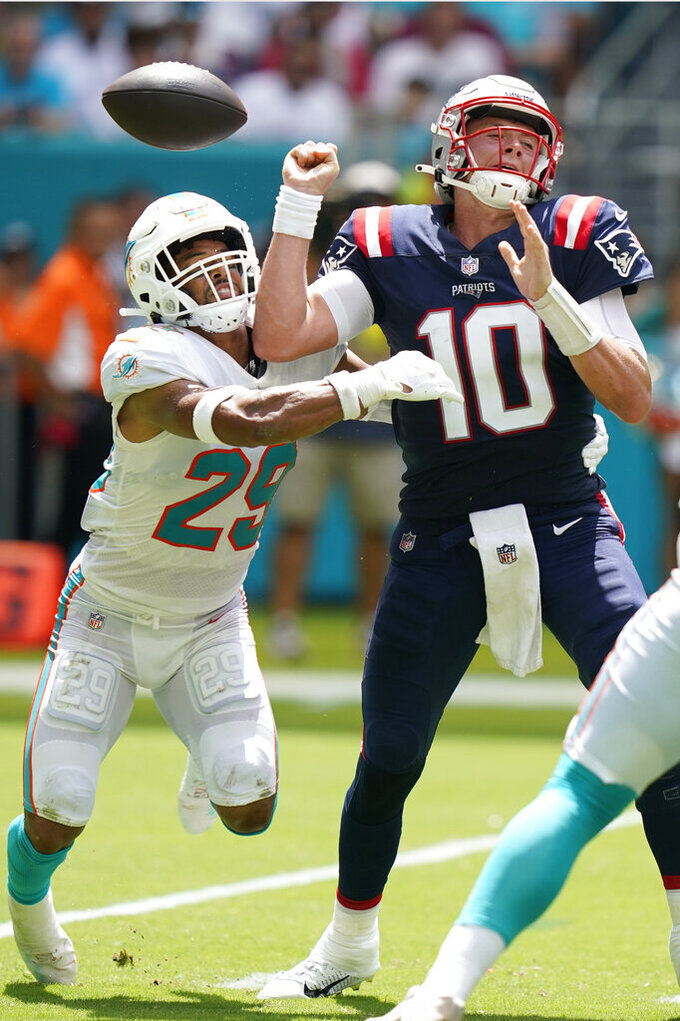 New England Patriots quarterback Mac Jones (10) fumbles the ball on a sack by Miami Dolphins safety Brandon Jones (29) during the first half of an NFL football game, Sunday, Sept. 11, 2022, in Miami Gardens, Fla. The fumble lead to a touchdown by the Miami Dolphins. (AP Photo/Lynne Sladky)

FOXBOROUGH, Mass. (AP) — Intrigue surrounded the Patriots throughout the preseason as they looked to remake their offense following the departure of coordinator Josh McDaniels.

The initial reviews are in, and most of them aren’t good.

It was bad enough New England turned the ball over three times and badly missed assignments in key situations during its 20-7 season-opening loss at Miami.

Now the Patriots will have to try to course correct heading into this week's matchup at Pittsburgh with quarterback Mac Jones nursing a back injury.

“I definitely feel better and I want to be ready to play (this week) against Pittsburgh,” Jones said Monday. “Wasn’t doing too hot after the game, but definitely feel a lot better. ... They did all the tests and everything was fine."

The second-year quarterback played the entire game and completed 21 of 30 passes for 213 yards with a touchdown and an interception. But he was sacked twice, one of which resulted in a scoop-and-score by the Dolphins’ defense. He also was hit hard the fourth quarter by safety Jevon Holland, who was called for roughing the passer on the play. Jones believes that's when he got hurt.

Though he said he “tried work through it” after the hit, Jones felt pain in his back coming off the field. That prompted him to get postgame X-rays and follow-up scans on Monday.

“It's football, you're going to get hit,” Jones said. “I've been hit harder before and will probably get hit harder in the future.”

For now, Jones plans to stick to his usual routine, which will include rehab before the team resumes practice on Wednesday.

As far as correcting the Patriots' issues on the field, Jones said they found some things to build on after watching the game tape.

“We did a lot of good things. We just have to eliminate the really bad things,” he said. “In terms of actually executing the plays, it was a lot better than we thought. ... But we've got to score more points and take care of the football.”

Despite the turnovers, the Patriots showed some ability to move the ball, getting into Miami territory on three of their first five drives and picking up 17 first downs in the game.

The offensive line’s communication issues were also in the spotlight throughout training camp following a shakeup that left center David Andrews as the only starter filling the same position he occupied last season.

Those issues showed up again Sunday and it resulted in two woefully blown assignments that gave the Dolphins free runs on Jones. The costliest was in the second quarter, with Brandon Jones getting to the Patriots quarterback for the strip-sack that was recovered by Melvin Ingram and returned for a touchdown.

“We didn’t block him. We had enough people to block him and we just didn’t get it handled right, obviously,” Belichick said. “It’s execution.”

Both plays occurred on the left side of the line, where Trent Brown is back at left tackle after switching sides with Isaiah Wynn. Rookie Cole Strange is also the new left guard following Ted Karras’ departure.

Safety Kyle Dugger was all over the field and logged five tackles, including two for a loss. He was on the field for 51 of 60 defensive snaps (85%) and was involved both as a run stopper and in coverage.

He did miss a chance to tackle Jaylen Waddle on his 42-yard TD catch late in the second quarter, but Dugger’s usage is a good sign for a player expected to help anchor the defense.

It wasn’t the most fruitful debut for receiver DeVante Parker. On the Patriots’ opening drive, he lost a jump ball in the end zone to ex-teammate Xavien Howard that was picked off by Holland.

It was one of two passes thrown Parker’s way. The other he hauled in for a 9-yard gain.

Safety Adrian Phillips left the game with rib injury in the second quarter and did not return.

6-8 — New England's record against the AFC East dating back to its 2019 loss to Miami in the regular-season finale. Of the six wins, four were against the Jets.

The Patriots stay on the road this week when they head to Pittsburgh for a matchup with a Steelers team that won’t have Defensive Player of the Year T.J. Watt.