Pats rookie Strange holding his own in first NFL camp 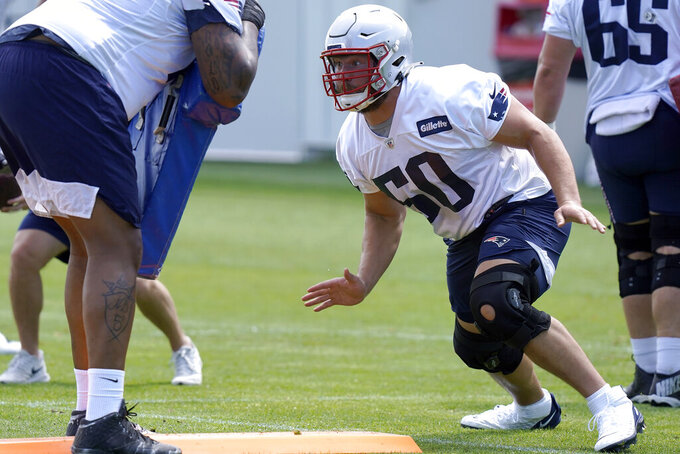 FILE - New England Patriots offensive lineman Cole Strange (50) takes part in drills with offensive lineman Trent Brown, left, at the NFL football team's practice facility in Foxborough, Mass., on May 23, 2022. After a seven-game win streak late in 2021, the Patriots saw a quick end to their season in the wild-card round. They addressed some holes at receiver and on the offensive line this offseason, but the unit as a whole will be undergoing a transition after former offensive coordinator Josh McDaniels left to coach Las Vegas. Defense is also in the spotlight entering training camp as the Patriots look to replace cornerback J.C. Jackson, who left in free agency. (AP Photo/Steven Senne, File)

His aim was simply to learn as much as he could and let the rest take care of itself.

“Honestly, I guess I really didn’t think that far ahead," Strange said Thursday. "It was kind of like, let me get this one rep that’s in front of me. Trying to be short-sided and not look too far ahead — right now at least.”

So far, he thinks it’s paying off.

While the offensive line has struggled so far to find chemistry after some offseason shuffling, Strange has been one of the most consistent players.

A surprise first-round pick out of Tennessee-Chattanooga in April’s draft, Strange was plugged into the left guard spot that opened following the free agency departure of Ted Karras. Strange appears to be on track to be the Week 1 starter there between center David Andrews and left tackle Trent Brown.

After he was drafted, Strange promised he would bring an aggressive and “nasty” style to the Patriots.

His teammates see that, but say his work ethic stands out more.

“He’s a good young fella, very athletic,” Brown said of Strange. “Willing to learn. Willing to put that extra work in. It’s gonna be fun working with him.”

The Patriots spent the balance of the first week of camp installing their new offense. Strange appears to be picking up his blocking assignments and has held his own when given the chance to matchup up with starting defensive lineman Christian Barmore.

“He’s a great guy to go against,” Strange said. “Honestly, I feel like all of them are. They’re all great competition. Every time we do that, I feel like I’m getting better. Hopefully I’m getting them better, too.”

When Strange has missed something, he’s at times gotten 1-on-1 feedback directly from coach Bill Belichick, something he thinks has been invaluable.

“I feel like it’s a huge advantage,” Strange said. “If I mess up on something and he comes over there and works with me, he pretty much tells what it is I messed up on and when we’re watching film, I see exactly what he’s talking about.”

One thing Belichick liked most about Strange coming out of college was his experience as a five-year starter. That maturity has shown, Belichick said.

“He’s done a good job on his assignments, shown a lot of maturity in different situations that we’ve put him in,” the coach said. “But it’s a long way to go, and obviously he has talent, but it comes down to production and consistency, and we’ll find out over a period of time how that is. Love working with him, though.”

Though he’s just a week away from getting his first preseason game action, Strange is trying not to look ahead.

“I guess I’m just focused on the here and now,” he said. “But I think it’s gone pretty well.”