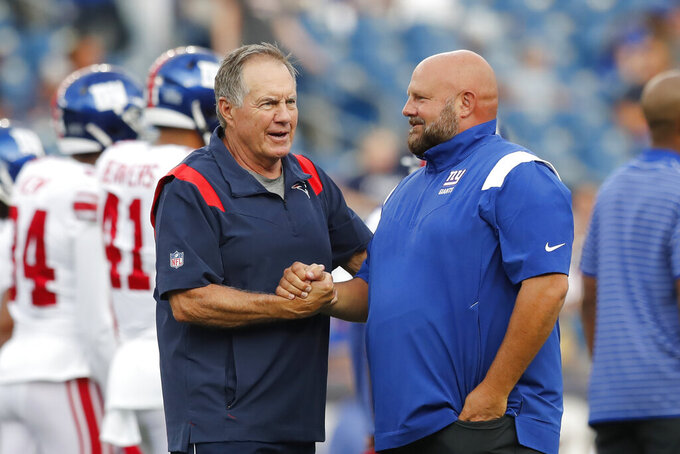 FOXBOROUGH, Mass. (AP) — During his tenure in New England, Bill Belichick has endeavored to keep the reasons behind the decisions he makes private.

So, it’s not surprising that a month out from the Patriots’ regular-season opener, who will be calling plays for his offense remains largely a mystery.

Assistant coaches Joe Judge and Matt Patricia have taken turns at it, and that’s about as much as Belichick has been willing to concede throughout training camp.

“Don’t worry about that, we’ll work it out,” he said following last week’s preseason matchup against the New York Giants.

That basically remained the sentiment Monday with Belichick adamant that competition between Judge and Patricia “doesn’t have anything to do with it” in terms of how he will determine who ultimately does it during the season.

What exactly is that process?

“I’d love to be able to shed a little more light on it, but, honestly, it’s a much longer conversation,” Belichick said.

What is certain is that the Patriots will enter their most competitive period of training camp to date when they open two days of joint practices on Tuesday with the Carolina Panthers.

Belichick gave most of his projected starters the night off against the Giants. So it’s at least possible the play-calling picture could become clearer this week, which concludes with the teams’ preseason matchup on Friday night.

“I think this will be our first test, yeah,” offensive lineman Trent Brown said. “We’ve got game week, Week 1 three weeks away. So, (Tuesday) will be a nice gauge to see where we are and see what we need to do before Week 1.”

Whatever is going on with the play-calling situation, Judge and Patricia both used “collaborative” to describe what’s transpiring between the longtime Belichick assistants who returned to New England after short head coaching stints.

“We follow Coach Belichick’s lead,” Patricia said. “I’m just trying to do my job to the best ability, whatever he asks me to do on any given day. And that’s the beauty of it. It’s always kind of new and exciting and challenging from that standpoint.”

Judge said his daily priority begins with focusing on football and letting the rest work itself out.

“The assistant coach’s job is real simple — make the head coach happy. That’s your job,” Judge said. “He has a vision for his team. He knows what he wants his team to look like. It’s our job to listen and go out and execute the way he sees it.

“So as defined roles and whatever it may be, I come to work every day with one simple policy — whatever he says goes. I’m not the head coach here. That’s one certain thing.”

Though Judge spent the majority of his eight seasons under Belichick coaching special teams, he said Belichick’s willingness to approach things differently was part of what drew him back to New England after he was fired by the Giants.

One who makes decisions on his own timetable.