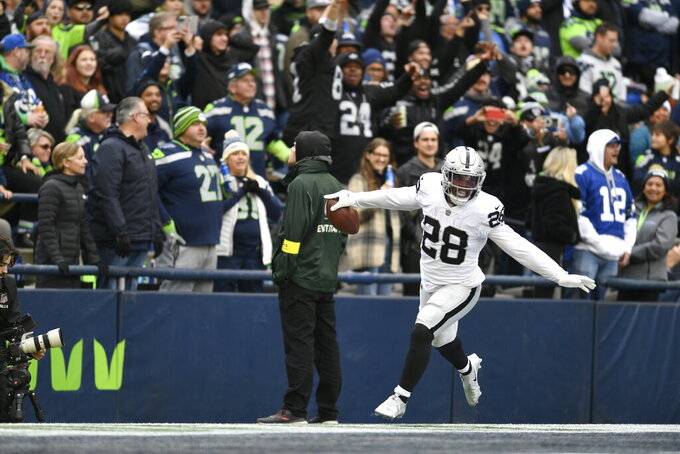 Las Vegas Raiders running back Josh Jacobs (28) celebrates after scoring a touchdown during the first half of an NFL football game against the Seattle Seahawks Sunday, Nov. 27, 2022, in Seattle. (AP Photo/Caean Couto)

SEATTLE (AP) — During a four-game win streak that vaulted them to the top of the NFC West, the Seattle Seahawks appeared to have fixed their problems stopping the run.

Perhaps those games were just a mirage and nothing was truly repaired.

Seattle’s defense was run over again on Sunday, giving up a franchise-record 283 yards rushing in a 40-34 overtime loss to the Las Vegas Raiders. Seattle was already having problems slowing down Josh Jacobs before he sprinted nearly untouched 86 yards for the game-winning touchdown in overtime.

There were clear issues for Seattle (6-5) on both sides of the ball as the Seahawks lost their second straight and fell one game behind division-leading San Francisco.

But nothing stood out as a bigger issue than the run defense.

“We gave up way too much in the running game. We did not play the run worth a darn in getting that done,” Seattle coach Pete Carroll said. “We didn’t rush the passer as well as we needed to, either. That’s just what happened in this game. I give them credit. They outplayed us and got their win. But it’s really frustrating because the game was there to be won.”

Jacobs’ 229 yards rushing were the most ever against Seattle, topping the 221 yards by Bo Jackson on Nov. 30, 1987 in the old Kingdome. The game-winning TD run by Jacobs brought back memories of Jackson rumbling 91 yards for a TD and down a tunnel inside the old concrete cavern that was imploded to make room for the stadium where Jacobs set records on Sunday.

It’s not what Seattle envisioned coming back from its bye week and beginning what it hoped would be a playoff push with five of its final seven games at home. Instead, the Seahawks raised questions that not long ago seemed to be answered.

“We have to fix it. Everybody’s going to expose it if we don’t fix it,” safety Quandre Diggs said. “We fixed it for a little bit. It showed its head today. At the end of the day, if we don’t stop the run, we’re not going to be able to do anything. It starts with everybody.”

The Seahawks thought what happened two weeks ago in Germany against Tampa Bay was an aberration. Tampa Bay came in with an awful run game but rushed for 161 yards, benefiting from an unexpected game plan and a slippery playing surface.

Clearly, there was more to it than that. Las Vegas averaged 7.1 yards per carry. Even before Jacobs' clinching run, the average was 5.1 yards.

“We just have to play more physical. Guys have got to get off blocks, make tackles. Can’t miss tackles. That’s what it is, basically,” linebacker Jordyn Brooks said.

The Seahawks are no longer in position for an NFC wild card, and a matchup with the 49ers on Dec. 15 looms large, since San Francisco beat Seattle in Week 2.