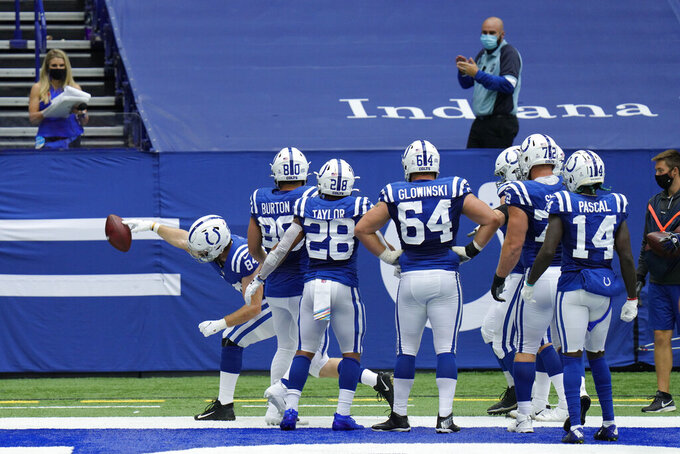 Indianapolis Colts' Jack Doyle (84) celebrates a touchdown reception during the second half of an NFL football game against the Cincinnati Bengals, Sunday, Oct. 18, 2020, in Indianapolis. (AP Photo/AJ Mast)

He heard the complaints about him costing the Indianapolis Colts victories, holding back the offense and perhaps not being the team's best option at quarterback. He listened to coach Frank Reich defend him, too, though he figured the arguments were pretty fair game after he gave away nine points in a loss at Cleveland.

Then the 38-year-old quarterback responded with a historic comeback in his best performance this season.

“If you stink it up, they better write ‘Rivers better get with it,’ and you expect it," Rivers said after Sunday's 31-27 victory. “I don’t know you guys personality-stuff wise, so I felt like you guys were pretty dang honest. I’m not going to look to read it this week because, shoot, I feel like I was the same guy I was last Sunday night. I just played a heck of a lot better than I did last Sunday."

He completed 29 of 44 for 371 yards and threw a season-high three touchdown passes with one interception. Thirteen completions gained 15 or more yards, nine going for at least 20.

And it wasn't just the stats that were impressive.

When the Colts fell behind 21-0 early in the second quarter, Rivers relied on his poise and experience to join Andrew Luck, Peyton Manning, Jim Harbaugh and Bert Jones as the only quarterbacks in franchise history to erase that large a deficit — and the first to do it in a regular-season home game.

Some may write off the performance as an anomaly since it came against one of the league's lowest-ranked defenses. But it also could serve as the jump-start the Colts (4-2) needed heading into their bye week.

“I’ve been around Philip enough to know that when he gets in the zone, which is more times than not, this is the kind of performance we expect from him," coach Frank Reich said. “He played great.”

Pass defense. Rookie safety Julian Blackmon sealed Sunday's victory with his second interception, giving the Colts a league-high 10. Blackmon isn't the only ball-hawk in this secondary. Everyone appears to be playing well in a group that has limited opposing quarterbacks to a league-worst 71.7 rating.

Faster starts. Indy's defense has played relatively well the first six weeks. But the first halves of the last two games have been a mystery. Cincinnati and Cleveland scored 44 points in the opening two quarters, with the Bengals putting up points on each of their first four possessions. Pro Bowl defensive tackle DeForest Buckner acknowledged Indy needs to fix that problem in their next game, at Detroit.

Marcus Johnson. The emerging receiver made one play after another Sunday, hauling in five receptions for a career-high 108 yards. It was the second 100-yard game of his four-year career, and Johnson believes playing in the same system for three consecutive seasons has helped him improve.

Rock Ya-Sin. His second season has been a major improvement over his rookie year. But he gave up some big plays Sunday and was called for an egregious personal foul when he body-slammed Giovanni Bernard. The penalty led to a field goal that put Cincinnati ahead 24-7.

Johnson and Xavier Rhodes were shaken up in the second half, but both finished the game. With a bye week on tap, Indy is hoping some injured players such as Pro Bowl linebacker Darius Leonard, defensive end Kemoko Turay and rookie receiver Michael Pittman Jr. could return in two weeks.

529. Rookie running back Jonathan Taylor has started five of his first six games and already has 529 yards from scrimmage. He's on pact to top 1,400 total yards this season, and the Colts' offense is still working out the kinks.

The Colts will spend Wednesday self-evaluating, then take four days off to get ready for a five-game stretch that could dictate their playoff hopes. After visiting Detroit on Nov. 1, the Colts host Baltimore on Nov. 8 and travel to Tennessee on Nov. 12 before welcoming Green Bay and the Titans to town on Nov. 22 and Nov. 29.