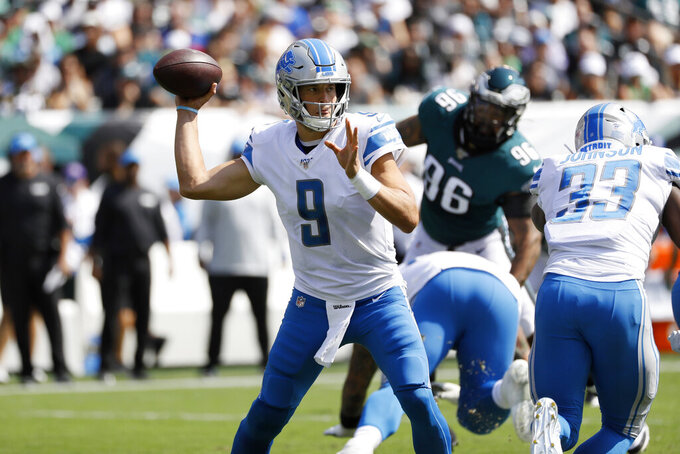 Detroit Lions' Matthew Stafford passes during the first half of an NFL football game against the Philadelphia Eagles, Sunday, Sept. 22, 2019, in Philadelphia. (AP Photo/Michael Perez)

PHILADELPHIA (AP) — Jamal Agnew quickly made up for two fumbles and the defense stepped up for Detroit when special teams almost blew it.

Matthew Stafford threw a touchdown pass to Marvin Jones, Agnew returned a kickoff 100 yards for a score and the Lions held on for a 27-24 victory over the Philadelphia Eagles on Sunday.

"It's good to get wins not playing your best football," Stafford said. "We're not playing our best, we kept battling. Finding ways to win as you're getting better as a team is a good thing."

The Eagles had a chance after Malcolm Jenkins blocked Matt Prater's 46-yard field goal try with 1:53 left. Rasul Douglas returned it to the Lions 22, but an illegal block on Jenkins pushed it back to midfield.

On fourth-and-5, Darren Sproles caught a pass for a first down but got called for Philadelphia's third offensive pass interference. Wentz's deep pass to J.J. Arcega-Whiteside fell incomplete with 41 seconds left. The rookie receiver said he should've caught it.

"It's the moment you ask for and dream about," Arcega-Whiteside said. "I gotta make the play."

Agnew got Detroit started by going the distance after Philadelphia jumped ahead 3-0. He atoned for mistakes in the first two games.

"I owe it to my teammates and the coaching staff for sticking with me," he said.

"He was working and he was grinding," Patricia said. "Give him all the credit in the world."

Jones had six catches for 116 yards, including a 12-yard TD reception that extended Detroit's lead to 27-17 on the first play of the fourth quarter.

Carson Wentz threw a pair of touchdown passes to Nelson Agholor, but came up yards short on a scramble on fourth-and-8 late in the fourth.

"Can't make excuses," Agholor said. "We had opportunities. We have to make plays."

Wentz clearly missed DeSean Jackson and Alshon Jeffery as receivers struggled to get open. Jackson didn't play because of an abdomen injury and Jeffery has a calf strain.

The Eagles cut it to 27-24 when Wentz threw a 2-yard TD pass to Agholor with 6:59 left. Penalties cost the Lions on that drive. A late hit on Wentz against Trey Flowers extended it and an unnecessary roughness call on Jarrad Davis moved the ball to the 5.

Wentz threw a 20-yard TD pass to Agholor in the third quarter. But the Lions answered with Stafford's TD to Jones.

Sanders fumbled twice on one drive and Detroit recovered his second one. That led to Prater's 25-yard field goal and a 17-10 lead.

Jordan Howard ran in from the 1 after Wentz scrambled 19 yards on third-and-6, giving the Eagles a 10-7 lead in the first quarter.

Agnew had the first kickoff return for a score this season. There were five in the NFL last year.

Patricia was on the other sideline as New England's defensive coordinator when Nick Foles led the Eagles to a 41-33 win over the Patriots in the Super Bowl two seasons ago.

Stafford now is 2-1 against Jim Schwartz, the Eagles defensive coordinator who was a first-year head coach when Detroit drafted the quarterback No. 1 overall in 2009.

Sanders had his helmet ripped off on a kickoff return when he was clotheslined by Miles Killebrew, who also grabbed the facemask and spun it around. There was no penalty called. The blatant miss was nearly as obvious as the non-call on the pass interference in the Rams-Saints NFC championship game. Todd Prukop was the back judge for both games.

The Eagles scored 10 points in the first quarter after scoring only 20 points combined in the previous 12 first quarters.

Lions: Host Kansas City next Sunday. The Chiefs won the previous matchup 45-10 on Nov. 1, 2015, but the Lions have won the past two times at home.

Eagles: At Green Bay on Thursday night. The Packers have won five of the past six meetings, including a 53-20 rout at Lambeau Field on Nov. 16, 2014.