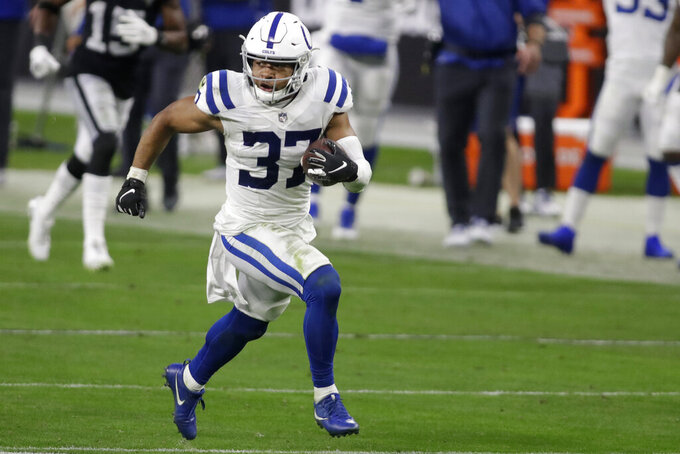 Indianapolis Colts strong safety Khari Willis (37) runs in for a touchdown after making an interception against the Las Vegas Raiders during the second half of an NFL football game, Sunday, Dec. 13, 2020, in Las Vegas. (AP Photo/Isaac Brekken)

When the rookie running back got his timing down, his confidence and productivity soared. Now, Taylor is playing like the workhorse back the Indianapolis Colts need during this season's stretch run.

All it took was a little time to understand the distinctions between working from a shotgun formation instead of the more conventional pro-style offense he played in at Wisconsin, and Taylor was off and running.

“Things are a little quicker in the shotgun with your reads," Taylor said after rushing for a season-high 150 yards and two scores in Sunday's crucial victory at Las Vegas. “Different plays require different timing and that was one of the biggest things I had to learn, realizing the different timings you had on different things from the gun."

The Colts (9-4) never doubted Taylor would reach this point. From the moment he arrived at training camp, Indy knew it had a gem behind Marlon Mack. But when Mack tore his right Achilles tendon in the season opener, Taylor inherited the starting job.

Initially, he showed flashes of his potential, but as the season wore on Taylor's consistency and touches waned. Three weeks ago, coach Frank Reich gave Taylor a fresh start. He hasn't disappointed.

The former Badgers star delivered with a 22-carry, 90-yard game against Green Bay. Then Taylor had 13 carries for 91 yards and three receptions for 44 yards and one TD at Houston. On Sunday, he swung the game with TD runs of 62 and 3 yards, keeping Indy atop the AFC South with Tennessee after three straight wins.

“He’s a blue-collar guy, and I think that’s why you continue to see him improving," left tackle Anthony Castonzo said. “He gets it. You can see it. When he really gets it and sees those holes, he’s going to be a force to be reckoned with."

Taylor already ranks among the franchise's most productive rookie backs. Through 13 games, he has 1,045 yards from scrimmage and needs 241 yards rushing to become the Colts' first rookie to run for 1,000 since Joseph Addai in 2006.

And after watching the ground game struggle for most of this season, Taylor has the Colts ready to show their finishing kick.

“We just kept saying, ‘Guys be patient, we’re getting better, we are doing the little things right. We’re not reaping all the benefits now, but just stick with it,'" Reich said. “We talked a lot about that as an offense, that we will be ascending at just the right time. Jonathan is a big part of that with the way he's seeing it and running it.”

Creativity. Reich introduced the Jacoby Brissett packages in short-yardage and third-down situations a couple weeks ago. It's helped in both areas. This week, Reich added an element: snapping the ball to running back Nyheim Hines, who handed it off for Taylor's second TD.

First-half defense. The Colts played better Sunday than they had in previous weeks, but still gave up 14 points, 203 yards and three third-down conversions in the first 30 minutes.

CB Kenny Moore II. The lobbying for Moore to make the Pro Bowl began weeks ago and now the plays just keep coming. After ripping the ball away from one receiver for an interception in Houston, Moore forced one fumble and made a spectacular one-handed interception in the end zone at Las Vegas.

Pro Bowl linebacker Darius Leonard (back) and starting cornerback Xavier Rhodes (left knee) both left early Sunday. On Monday, Reich said he's optimistic both could play next weekend. The bigger concern was getting backup linebacker Jordan Glasgow home after he was placed on the reserve/COVID-19 list Sunday. Reich said Glasgow flew home on a private charter, is home and doing well. He also said there have been no other positive tests.

34 — Khari Willis' first career touchdown came on a 50-yard interception return. It was Indianapolis' fourth defensive touchdown this season. Add in the four PATs and the Colts having three safeties for a total of 34 defensive points this season.

Indy took a huge step toward the playoffs with Sunday's victory. Its is one game ahead of Miami and two ahead of Las Vegas. With home games still left against Houston and Jacksonville, the Colts are in control of their postseason chances — for now.