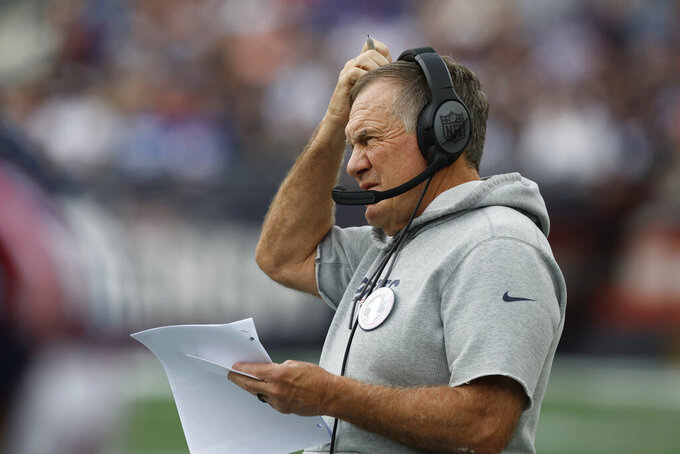 New England Patriots head coach Bill Belichick on the sideline in the first half of an NFL football game against the Indianapolis Colts, Sunday, Nov. 6, 2022, in Foxborough, Mass. (AP Photo/Michael Dwyer)

FOXBOROUGH, Mass. (AP) — The Patriots returned from their bye week very much in the AFC playoff picture.

But so is everyone else in an AFC East that suddenly has the most parity in the NFL.

Entering Week 11 it's the only division in the league featuring all four teams with records above .500. New England (5-4) is last among them, yet currently holds the AFC’s final wild-card spot.

Sunday’s home matchup with the New York Jets will begin a tough stretch that will see New England play three games over a 12-day period, concluding with back-to-back Thursday night games at Minnesota on Thanksgiving night and home against Buffalo on Dec. 1.

“We know what the schedule is. Certainly, the Jets are highest priority, but we have to be ready for the rest of the schedule as well,” Patriots coach Bill Belichick said Monday.

Ultimately making the playoff field is by no means guaranteed, either.

Of the Patriots’ eight remaining opponents, five — the Jets (6-3), Vikings (8-1), Bills (6-3) twice and Dolphins — would qualify if the postseason began this week.

What’s more, the AFC East hasn’t gotten three teams into the playoffs in the same season since 2001. Only once have four teams made it (1998).

Last season, only division champion Buffalo (11-6) and New England made the cut, with Miami missing out at 9-8.

Despite some signs of the offense showing improvement during a 26-3 win over the Colts in Week 9, it’s been the defense that’s carried the Patriots to this point. That was on display during the win over Indy, when New England had nine sacks in what turned out to be Frank Reich’s final game as Indianapolis’ coach.

Monday’s return to the practice field did bring some encouraging signs on the health front for the Patriots, with receiver DeVante Parker back in uniform after sitting out the Colts game with a knee issue.

That’s on the heels of center and captain David Andrews making his practice return during the team’s lone workout during the bye. He’s missed the past two games with a concussion.

If he is back in the lineup this week, he should bring some stability to an offensive line that has been riddled with penalties and dealt with protection breakdowns as it continues to adjust to preseason personnel and position changes.

It could also go a long way toward quarterback Mac Jones salvaging what so far has been an underwhelming second NFL season.

Left tackle Trent Brown said Jones has kept a positive mindset on the field throughout the season even when things haven’t gone according to plan.

“It’s easy to ride the wave and point fingers,” Brown said. “But we all know that everybody — all 11 on the field on both sides of the ball — gets paid to do this because we’re good at what we do. I think it’s just an understanding that it’s a long game and you can’t really ride the wave. You’ve got to stay even keel.”