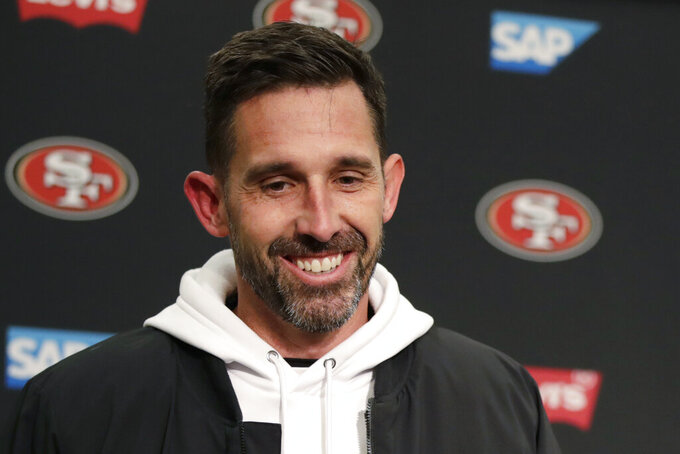 FILE - In this Dec. 29, 2019, file photo, San Francisco 49ers head coach Kyle Shanahan smiles during a news conference after an NFL football game against the Seattle Seahawks in Seattle. The 49ers rewarded Shanahan with a new six-year contract Monday, June 15, 2020, after he took the team to the Super Bowl in his third season at the helm. A person familiar with the deal said the Niners are replacing the three years remaining on Shanahan's original six-year contract signed in 2017 to keep him under contract through 2025. The person spoke on condition of anonymity because the deal hasn't been announced. (AP Photo/Stephen Brashear, File)

The San Francisco 49ers rewarded coach Kyle Shanahan with a new six-year contract Monday after he took the team to the Super Bowl in his third season at the helm.

The Niners are replacing the three years remaining on Shanahan’s original six-year contract signed in 2017 to keep him under contract through 2025. ESPN first reported the new extension.

The 49ers won just 10 games in Shanahan’s first two seasons in San Francisco before a breakthrough in 2019. The Niners went 13-3 in the regular season, with the nine-win improvement the biggest in one season in team history.

San Francisco earned the top seed in the NFC playoffs and then went to the franchise’s first Super Bowl in seven years. The Niners blew a 10-point lead in the fourth quarter against Kansas City in that game and lost 31-20.

But the 40-year-old Shanahan has brought needed stability to the Niners who went through three coaches in the three seasons before his arrival. He and general manager John Lynch have worked well together and have overhauled the roster into one of the NFL’s deepest.

Shanahan, the son of two-time Super Bowl champion coach Mike Shanahan, is also widely regarded as one of the best play-callers in the league. San Francisco ranked second in the NFL last season in scoring and fourth in total offense. The Niners' 29.9 points per game last season was the second best mark in team history.

Shanahan also been outspoken this offseason about the need to confront racism in the country and has called for more minority hiring in NFL coaching staffs and front offices.

The Niners have one of the NFL’s most diverse staffs with about half of the assistants being either minorities or a woman. Defensive coordinator Robert Saleh is Arab-American, special teams coordinator Richard Hightower is black and the team was one of the first to employ a full-time woman assistant in Katie Sowers.

Shanahan was honored as the NFL's top assistant by the AP in 2016 when he helped the Falcons reach the Super Bowl.