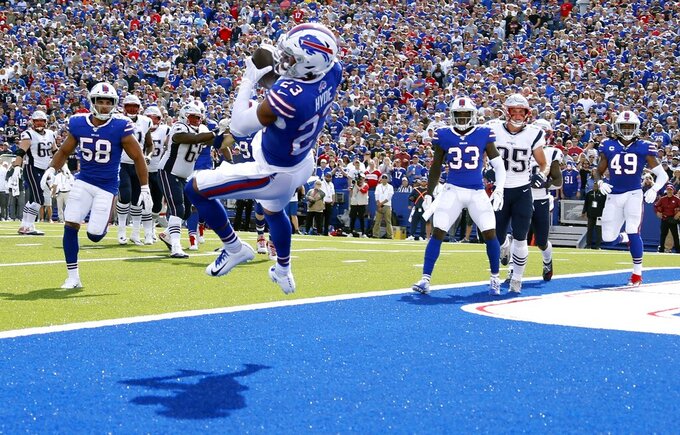 Like it or not, Bills coach Sean McDermott is going to require patience in dealing with a 3-1 team that has two sides of the ball in entirely different stages of development.

McDermott spoke to that situation when responding to a question about Zay Jones' struggles adjusting to his new role among a revamped group of receivers.

"When you look at our defense and offense, there's different levels of continuity," McDermott said Monday, a day after the Bills committed four turnovers and squandered a stout defensive effort in a 16-10 loss to New England.

"The defense is a year, a year-and-a-half ahead in terms of continuity," he added. "Offensively, we've got eight, nine new players just in the starting lineup."

The Bills overcame their deficiencies in rallying from deficits to win each of their first three games. It was a different story against the defending Super Bowl champions and division rivals who have now defeated Buffalo 34 times in their past 39 meetings.

The Bills lost a game in which its defense limited Tom Brady to a touchdown and field goal, 11 first downs and forcing nine punts in one of the quarterback's worst statistical performances in 13 years.

Defensive coordinator Leslie Frazier insists his unit, which returns 10 starters , has to be better.

"Just search deep and hard and figure out more things that we can possibly do," he said, noting Buffalo managed just one takeaway with Micah Hyde intercepting Brady in the end zone.

In the meantime, the Josh Allen-led offense is expected to continue enduring its share of growing pains — with, and perhaps, without the second-year quarterback in the coming weeks.

Allen's status is uncertain for this weekend's game at Tennessee. He was placed in the concussion protocol following a helmet-to-helmet hit by New England's Jonathan Jones in the opening minute of the fourth quarter.

The injury put an abrupt end to one of the second-year quarterback's worst performances, while furthering an ongoing trend of Allen being careless with the ball.

He threw three interceptions — all on first-down situations — to increase his turnover total to eight (six interceptions, two lost fumbles) this season. Two of those turnovers translated into nine points as the Patriots built a 13-0 lead through the first quarter.

And then there was Allen's inability to get rid of the ball in a game he was sacked four times — three coming inside the Patriots 35. One sack for a 5-yard loss was immediately followed by Stephen Hauschka missing a 49-yard field attempt wide left. Another sack for a 7-yard loss pushed Buffalo out of field goal position.

"It's more concerning than frustrating," McDermott said. "He's got to continue to learn."

A run defense that allowed just 74 yards against New England, after giving up 273 in its previous meeting — a 24-12 loss on Dec. 23. Buffalo has held three of four opponents under 75 yards rushing already, one fewer time than all last season.

Game management. Buffalo used its three second-half timeouts by the opening play of the fourth quarter, when Allen called time facing third-and-8 at New England's 45. The first one was used with 6:10 left in the third quarter on defense, and the second on the second of McDermott's two failed challenges. Josh Gordon's 31-yard catch on third-and-6 was allowed to stand following a review for offensive pass interference.

Receiver/returner Andre Roberts appears to be over a quadriceps injury that forced him to sit out Buffalo's first two games. The first-team All-Pro last year returned six punts for 77 yards, including a 13-yarder, and even got involved on offense with a 6-yard catch.

Jones is showing no signs of building off last season, when the 2017 second-round draft pick led Buffalo in catches (56), yards (652) and seven touchdowns. Thus far, he has seven catches for 69 yards. Against New England, Jones managed just two catches for 4 yards despite being targeted eight times, including two that resulted in Allen interceptions.

Allen and S Dean Marlowe are in the concussion protocol. RB Devin Singletary is closer to returning after missing past two games with a strained left hamstring.

The Bills seek to rebound by facing the Tennessee Titans (2-2) on Sunday, before entering their bye week off. Buffalo has shot to open 4-1 for first time since 2011.