As camp approaches, how will NFL handle players opting out? 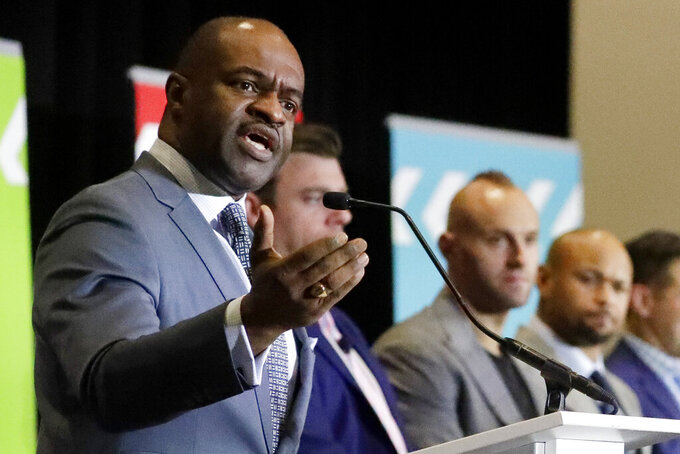 FILE - In this Jan. 30, 2020, file photo, NFL Players Association Executive director DeMaurice Smith speaks at the annual state of the union news conference in Miami Beach, Fla. The NFL and the NFLPA haven’t come to an agreement on all protocols for training camp and the preseason as the report date for teams draws closer. (AP Photo/Chris Carlson, File)

The 60-game mini-season Major League Baseball assembled this summer was still long enough that a dozen or so health-concerned players, even a few stars, decided to skip it.

The NFL's player pool is more than twice as big as MLB's, groomed for fundamental extreme-contact activities of blocking, tackling and covering that are as inherently ripe for virus spread as any in sports. If the 2020 season can get off the ground this fall amid the global paralysis of the COVID-19 pandemic, players opting out will be a sure bet.

For those who choose to sideline themselves with a medically approved high-risk condition, will they continue to receive their salary and benefits and accrue a season toward free agency eligibility? Who will sign off on the categories and the diagnosis?

As with the rest of society in the fight against this unseen, fierce and unprecedented foe, the list of questions is far longer than the answer key.

“I just pray that everybody can be safe. A lot of people have families. People have kids,” Tennessee Titans running back Derrick Henry said.

With the targeted July 28 start for training camp for most teams fast approaching, the owners and the players have a lot of health-related protocols to establish so this precarious season can even kick off. Testing frequency is at the top of the list. The practice schedule and necessity of exhibition games are also major points of negotiation. Then there's the issue of opt-out clauses.

One potential point of lingering contention between the league and the NFL Players Association is whether COVID-19 will be categorized as a “non-football injury." Players on the reserve non-football injury list are not required to be paid.

In baseball, high-risk individuals were allowed to opt out with pay. San Francisco Giants catcher Buster Posey, however, will not receive a salary because his reasoning for not playing was specific to him and his wife adopting identical twin girls.

For an NFL player who makes a similar decision, the NFLPA will push for at least service time accrual and benefits eligibility, even if salary is withheld.

To date, NFLPA executive director DeMaurice Smith said Friday, no players have formally decided to skip the 2020 season out of virus concern.

He added: “If that was your son, what options would you want him or her to have, as they made a decision about engaging in this work? I know it sounds a little utterly altruistic. It is. That’s how we try to make these decisions.”

The NFL declined to make chief medical officer Dr. Allen Sills available for an interview this week or comment on the opt-out issues, citing the sensitivity of the active negotiations with the union.

“We will continue to implement the health and safety protocols developed jointly with the NFLPA, and based on the advice of leading medical experts, including review by the CDC,” the league said Friday in a statement. “We will address additional issues in a cooperative way. All decisions will be made in an effort to put us in position to play a full regular season and postseason culminating with the Super Bowl which is the shared goal of the clubs and the players.”

Tampa Bay Buccaneers left tackle Donovan Smith said recently on social media that playing this season during the pandemic “does not seem like a risk worth taking” for him and his family's health.

New York Giants left tackle Nate Solder was more blunt last week on Twitter: “If the NFL doesn’t do their part to keep players healthy," he posted, "there is no football in 2020. It’s that simple.”

The culture of the sport, from the natural aggression that unfolds on the field to the short careers made more urgent by the lack of guaranteed contracts, could well prompt a fringe player to ignore a heightened personal or family risk out of fear of losing his spot on the roster or his place in the league. Unlike baseball, pro football has a smaller amount of players secure enough to skip a season without worrying about the ramifications.

“You’re putting them in a really difficult position, not that much different than the essential worker that’s got to make a decision, ‘Do I go drive the bus and potentially risk my own health and my family’s health in order to pay the rent?’ I’m not comparing $18 per hour to $610,000 a year, but the guy making $610,000, the seventh-round rookie, he hasn’t made the team yet. He doesn’t have any money,” said agent Blake Baratz, of The Institute for Athletes.

In this age of heightened awareness of head injuries and greater player empowerment across the league, though, there's clearly more support for taking care of off-the-field matters and less peer pressure to avoid letting the team down than in past eras.

“Anybody that’s played any sport at most levels, the camaraderie and the understanding that you have with you and your teammates and friends is very important. I think no matter what anybody chooses to do, it’ll be understood by the other players and coaches in the locker room,” Minnesota Vikings tight end Tyler Conklin said. “At the end of the day, people do have families.”