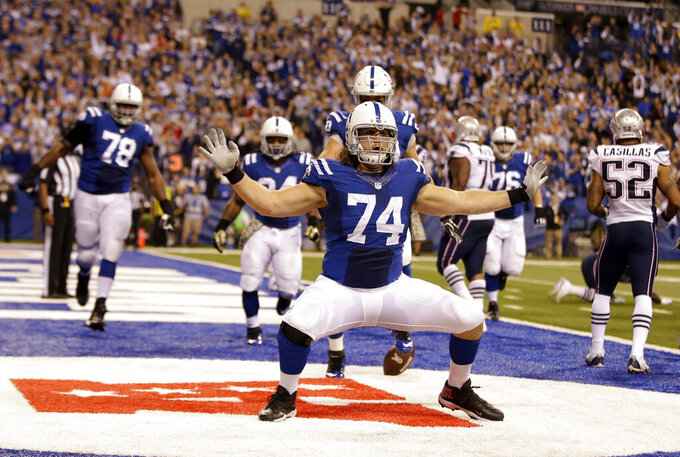 FILE - Indianapolis Colts tackle Anthony Castonzo celebrates after making a catch for a touchdown against the New England Patriots during the second half of an NFL football game in Indianapolis, in this Sunday, Nov. 16, 2014, file photo. Catsonzo, the Colts longtime left tackle, announced his retirement Tuesday, Jan. 12, 2021. The 32-year-old had been an anchor on Indy's offensive line since he was the No. 22 overall draft pick in 2011. (AP Photo/Darron Cummings, File)

INDIANAPOLIS (AP) — When Anthony Castonzo first arrived in Indianapolis in 2011, he figured he'd be a short-timer.

He wound up starting at left tackle for the next decade.

The Colts' longtime offensive line anchor announced his retirement Tuesday, three days after a postseason loss at Buffalo and less than two weeks after undergoing season-ending surgery on his right ankle.

“If you would have told me after training camp my rookie year that I was going to have a 10-year career, I would have laughed in your face," the 32-year-old Castonzo said during a video call. “I would have been like, ‘I can’t block anybody in the NFL’ because Dwight Freeney did that to me."

Clearly, the Colts knew better when they drafted the Boston College alum with the No. 22 overall pick.

Indy envisioned Castonzo being Peyton Manning's blindside protector into the foreseeable future. But a neck injury kept Manning out of the entire 2011 season. Manning was released in March 2012 before the two ever took a snap together.

Still, Castonzo managed to deliver on his promise.

“For 10 seasons, Anthony consistently handled premier pass rushers at one of the toughest positions," team owner Jim Irsay said in a statement.

“He quickly developed into the leader of our offensive line and set a standard for preparation, strength and conditioning and play. Anthony deserves a tremendous amount of credit for helping our offensive line mature into one of the best units in the NFL. He will sorely be missed."

This season, he missed four regular-season games with rib, knee and ankle injuries and went on injured reserve before the wild-card game. Castonzo said the injuries played no part in the decision, only that it helped cement the feeling it was the right choice.

“I talk to Andrew (Luck) really regularly. He and I are still very good friends," Castonzo said “I talked to him just saying, ‘What’s it like?’ I didn’t really need to do it because I’ve seen it. I mean I still hang out with him and see him a bunch, but yeah I definitely leaned on him because he’s been through the process."

Though he never was selected to the Pro Bowl or All-Pro teams and never played in a Super Bowl, the Illinois native said he leaves with no regrets.

What's next? Losing weight, relaxing and perhaps a future in scouting.

“I actually talked to Ed Dodds a little bit because they would send you things like, ‘What did you think of this player you played against?’" Castonzo said, citing Indy's assistant general manager. “I took a lot of time and I would send our personnel guys pretty detailed descriptions of what I thought of different players. He was like, ‘If you ever have any idea of getting into the personnel department, just let me know.’ I like watching football film and I could tell you what I think of players. I could maybe get into that in the future, but nothing in the immediate future. I’m ready to take a little break from football."

The bigger question may be what's next for the Colts?

Quarterback Philip Rivers has an expiring contract and though he played his best football over the final 12 games, it's unclear whether he'll return next season at age 39.

Indy must fill the huge void at left tackle, too.

“If that’s what happens, I’m going to tell you right now he’s going to do a nice job," Castonzo said. “He has all the skills to do it and I think he had a lot of fun. Even before it was a possibility he was playing left tackle, he would sometimes go out there on scout team and play it. He would come up to you and be like, ‘Hey, look at my set, what do you think?’ And I’m like, ‘Honestly it’s pretty good.' Surprisingly, it’s actually really good.’"

The one thing Castonzo now knows, though, is that his career is over.