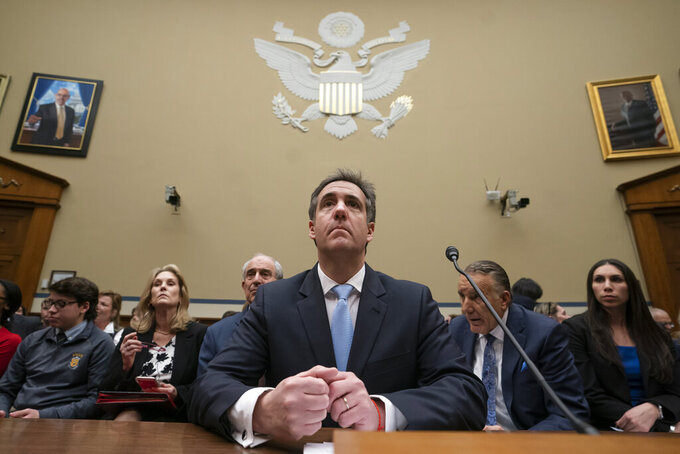 NEW YORK (AP) — Michael Cohen said during his congressional testimony Wednesday that Donald Trump grossly overstated his wealth before becoming president, including inflating his assets during a failed bid to buy the Buffalo Bills in 2014.

The claim raises questions about whether Trump could face even more legal trouble if, as Cohen said, he misrepresented his worth in applying for a loan to buy the NFL team.

Experts said a criminal case against Trump appears unlikely for several reasons. But Cohen's latest assertions could affect the court of public opinion at a time when lawmakers are discussing the possibility of impeachment.

Trump was one of three known finalists in the bid to purchase the Bills in the summer of 2014 following the death of franchise founder and Hall of Fame owner Ralph Wilson. He lost out to the owners of the NHL's Buffalo Sabres, Terry and Kim Pegula, who purchased the Bills for $1.4 billion. The third group was led by rocker Jon Bon Jovi.

Cohen, once Trump's lawyer and one of his closest advisers before he pleaded guilty to tax crimes, fraud, lying to Congress and campaign finance violations, testified for hours Wednesday before the House Oversight Committee.

As part of the effort to buy the Bills, Cohen said, Trump gave financial statements to Deutsche Bank in hopes of getting a loan.

The documents, which Cohen provided to the committee, said Trump's net worth was $4.55 billion in 2012 and soared to $8.66 billion in 2013 because of the addition of a line item for $4 billion worth of "brand value"— essentially the value Trump placed on his name.

Cohen told lawmakers Trump inflated his wealth "when it served his purposes, such as trying to be listed among the wealthiest people in Forbes," even as he deflated assets to reduce his real estate taxes.

He didn't go into specifics as to how the financial statements provided to Deutsche Bank were inaccurate or offer evidence backing his assertion they were inflated.

Duncan Levin, a former federal prosecutor, said Cohen is accusing Trump of a crime similar to mortgage fraud, a common offense in which a home buyer lies about his assets to get a loan.

"What he is laying out is something that is not only criminal but the type of behavior that authorities investigate and prosecute every day," Levin said. "It's a bread and butter offense."

If what Cohen said is true, he added, the president could be charged under federal law for wire and mail fraud or under New York state law for what is called "causing a false filing." Such cases usually involve instances where the borrower gets the loan, but that isn't required for all prosecutions.

The Trump Organization didn't immediately respond to an email or call Wednesday.

A Deutsche Bank spokesman declined to comment and would not say whether the bank has been contacted by investigators.

The U.S. Attorney's Office in Manhattan declined to comment.

The statute of limitations— five years for most federal offenses — could preclude a prosecution. Trump could theoretically face criminal bank fraud charges if prosecutors could prove Trump intended to deceive with financial statements and that the bank relied on those figures, said John Coffee, a law professor at Columbia University.

The Justice Department, however, has held since 1973 that prosecuting a sitting president is unconstitutional.

Banks are skeptical of estimates of personal wealth, and Trump was well known for inflating the value of his assets. Trump once admitted in a deposition that his net worth calculations depend partly on "my own feelings."

Brand value is part of what accountants call "goodwill" and is difficult to value. Companies frequently adjust goodwill because their estimates are so flawed. In 2017, publicly traded companies in the U.S. admitted they overestimated "goodwill" by $35 billion, according to the advisory firm Duff & Phelps.

While Trump said he could get $4 billion for his brand, Forbes pegged the value at just $125 million two years later.

The financial statement provided to Deutsche Bank said Trump's "Seven Springs" mansion and estate north of New York City was worth $291 million in 2012. His 2018 government ethics filing said it was worth between $25 million and $50 million.

Questions were raised about Trump's seriousness and value as he campaigned to get the Bills, but Cohen, who served as Trump's spokesman through the process, insisted Trump was intent on acquiring the franchise. He insisted at the time that his boss was worth $9 billion, citing Forbes estimates.

"There's nobody more serious than Donald Trump," Cohen said then.

His effort to buy the team included, according to some people who were involved, the creation of a fan group called 12th Man Thunder that pushed to keep the team in Buffalo amid speculation that Bon Jovi planned to move the franchise to Canada. One of the group's leaders later said that Trump was secretly behind the creation of the fan group.

Depending on how much Trump sought to borrow from Deutsche Bank, it's not clear the league would have approved Trump as an owner.

NFL rules require owners to control 30 percent of the team and have a debt limit of $350 million.

Trump, following his failed bid, said on Twitter he "would have produced a winner" even though he "refused to pay a ridiculous price" for the franchise.

"The @nfl games are so boring now that actually, I'm glad I didn't get the Bills," Trump wrote. "Boring games, too many flags, too soft!"

This story has been corrected to show that Cohen provided documents to the committee, not Trump.