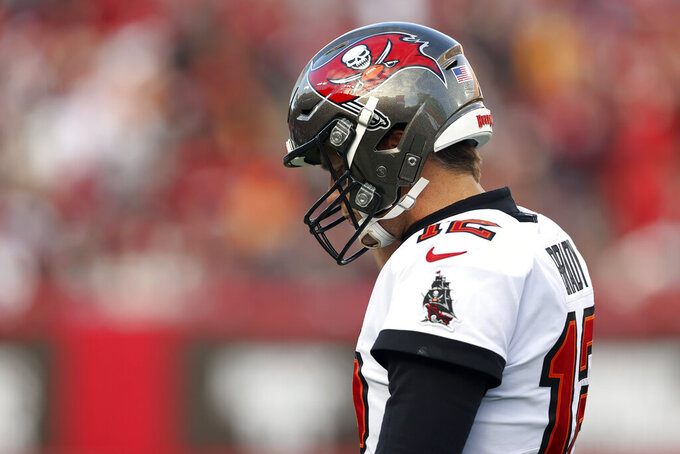 Tampa Bay Buccaneers quarterback Tom Brady (12) walks off the field after a drive stalled during the second half of an NFL divisional round playoff football game against the Los Angeles Rams Sunday, Jan. 23, 2022, in Tampa, Fla. (AP Photo/Mark LoMoglio) 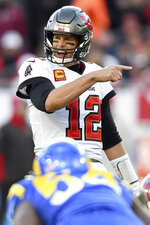 Aaron Rodgers seemed tired and uninterested, almost as if working overtime to spread fake science and conspiracy theories was more important to him than getting the Green Bay Packers to the Super Bowl.

Tom Brady didn’t look much better. He was beaten up and aging quickly on the field in Tampa Bay — until suddenly he wasn’t.

Not that it matters all that much. In an epic round of playoff games, the young quarterbacks showed the NFL will be in good hands for years to come.

Patrick Mahomes outdueled Josh Allen and the Bills in a game so good it should have been a Super Bowl by itself. Maybe two.

Joe Burrow won one for the Bengals, proving he is as good as he is brash, and Matthew Stafford is a game away from doing in Los Angeles what he never had a chance to do in Detroit.

Jimmy Garoppolo, meanwhile, never stopped smiling even though he did little except lead San Francisco to a winning field goal in frigid Green Bay.

The old guys? Eh, not so much.

It seemed like the perfect opportunity for Brady to finally acknowledge Father Time and call it quits on a remarkable career, even as he helped lead an improbable fourth quarter Tampa Bay rally against the Rams. Brady had his moments, but there were long stretches of the game when it appeared retirement couldn’t come soon enough for the greatest quarterback ever.

“I haven’t put a lot of thought to it,” Brady said afterward, picking his words carefully. “We’ll just take it day by day and see what happens.”

Rodgers also wasn’t going to commit to his future, but he did warn Green Bay fans they wouldn’t see him again if the team was planning to go into a rebuilding mode. He’s got a year left on his contract, though you might wonder why the Packers would risk another season of disruption at the hands of a quarterback who totally disrupted this one.

But, really, who else would want him?

Rodgers is as self-centered and arrogant as star athletes come, convinced perhaps by his stint hosting “Jeopardy!” that he knows answers others can only guess. He had no compulsion during the season pretending he was vaccinated, disrespecting his teammates and putting them and everyone else at Packers headquarters at risk of catching COVID-19.

The way social media gleefully mocked Rodgers’ performance in the snow against San Francisco, he doesn’t seem to have a lot of people cheering for him, much less buying a new insurance policy at his behest.

Those in the Twitterverse suggested Rodgers was silenced by a conspiracy of special teams players. They said he had no shot of winning, and pointed out that this was his first playoff loss in the Moderna era.

They also wondered — just like all of us — if the game plan for the 49ers was as detailed as the 500-plus pages of “research” Rodgers read before making his mind up to roll the dice with a virus that doesn’t care how good he is at finding open receivers.

Almost lost in all the drama is the fact is that even though Rodgers is poised to win a second straight MVP trophy he has played in only one Super Bowl in 14 years as a starter in Green Bay — and that was 11 long years ago.

Brady is different, of course, because Brady is different than any quarterback who came before him. The seven Super Bowl rings will be a record that stands the test of time, and he gave an entire franchise new life when he left New England for the Buccaneers two seasons ago.

Brady may be hard to warm up to even after all these years, but it’s not because he thinks Bill Gates is putting tracking chips into vaccines. He plays on his own terms and reveals little else to fans, but no one can dispute his greatness. Even in an uneven performance on Sunday he was still the one player most feared on the opposing sideline as the clock turned to the fourth quarter in Tampa.

If Brady wants to come back for yet another season, the Bucs will surely welcome him. But on a weekend when young quarterbacks were strutting their stuff, what’s to gain from a 23rd season on a field with players who hadn’t even been born when he took his first NFL snap?

The Brady era has to end sometime and Sunday felt like it was that time. There really hasn't been a Rodgers era outside of Green Bay, but it's time for that to end, too.

As was clear to anyone watching the wildly entertaining quartet of games, there are plenty of great quarterbacks to take their place.