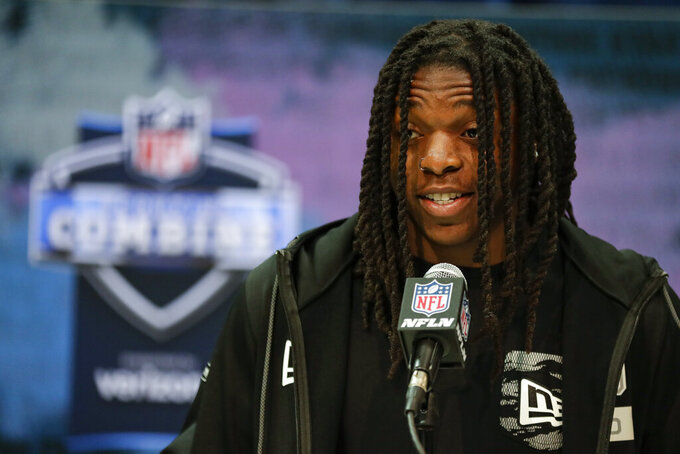 Chances are good they'll grab one in this year's draft.

The NFL scouting combine in Indianapolis features a tantalizing wide receiver class unlike anything ever seen at the league's annual gathering of top prospects.

“You've probably heard every GM and coach talk about this wide receiver class; it is a good one,” Jets GM Joe Douglas said. “Just watching them go across the stage, there is a lot of talented players and we see how much the pass game affects the National Football League. So we do feel good about this group.”

Teams are more willing than ever to bypass the old wait-and-watch standby for a plug-and-play approach with bigger, faster, quicker pass-catchers coming out such as Calvin Ridley and D.J. Moore who made an immediate impact in 2018, followed by Deebo Samuel, DK Metcalf, Marquise Brown, Terry McLaurin and A.J. Brown, who wasted no time establishing their credentials last season.

It starts way before college.

"I think in today's day and age where these guys were starting 7-on-7, it's almost like AAU basketball," Packers GM Brian Gutekunst said. “The receivers are so much more advanced in terms of their fundamentals coming into college and the league than maybe they have been in the past. It's really just the NFL offense that will take time. So I think there's some guys sitting here today that I think will have a chance to make a pretty immediate impact, and I'm excited about that.”

Receivers may still need to adjust to the NFL's press coverage but just as often they're the ones putting the DBs on their heels from the get-go.

"Historically, receivers have struggled a little bit with the learning curve up to the NFL. But in the last three, four or five years, we've seen a lot of guys make immediate" impacts, said Ravens general manager Eric DeCosta.

“Especially last year, if you look at the class, you'll see a bunch of guys come in right away and make big plays. We were fortunate last year with Marquise and even Miles (Boykin) to a degree made plays for us. We're excited about those two guys and we look at this year's draft class as an opportunity for us to improve at the position even more.”

“I think it's a combination of things,” Washington Redskins coach Ron Rivera said. "I think teams are starting to understand how you use players. But I also do think because the ball is being thrown so much in college football the receiver is learning to be an explosive guy.

"I also think the body types of the receivers is changing," Rivera said. "I think they're getting bigger and stronger. There's a lot more guys that are coming out that are ready to go and are dynamic players. The guys I think people are really looking for are these bigger receivers who are dynamic with the ball in their hands."

Just to name a few.

The wide receiver group is “as deep as I've seen,” NFL draft analyst Daniel Jeremiah said. "I've got 27 wide receivers with top-three round grades in this draft. And consider average 31 are taken. We had a max of 35 taken in (2015). So this is a really phenomenal group of wideouts."

There's someone for everyone this year, whether they're looking for a deep threat, a crisp route-runner, a fearless man going over the middle or even taking the direct snap like Shenault did so often at Colorado.

“I think there could be a lot of guys drafted all the way through from 1 to 7 (rounds),” Beane said. “We were talking about it the other day. There's going to be guys drafted on the third day of the draft who may come in and take a veteran's spot on a team. It's that deep.”

Las Vegas Raiders GM Mike Mayock noted an average of 12 wide receivers have been selected in the first three rounds over the past decade, and this year's group features twice that number who are graded by teams as top-100 talents.

"So, there's depth throughout and there's quality up top," Mayock said.

And there's jockeying for cream-of-the-crop status when they showcase their skills during on-field workouts at Lucas Oil Stadium in prime time on Thursday night.

The best of the bunch is probably Jeudy or Lamb, but they all sport that one attribute that premier pass catchers also possess: a confidence bordering on cockiness.

Jeudy said he's the best, but he's hearing everyone else say they're the best.

"I feel like everybody should think they're the best receiver coming out in the class," Jeudy said.

They all might end up being part of the best wide receiver class ever.