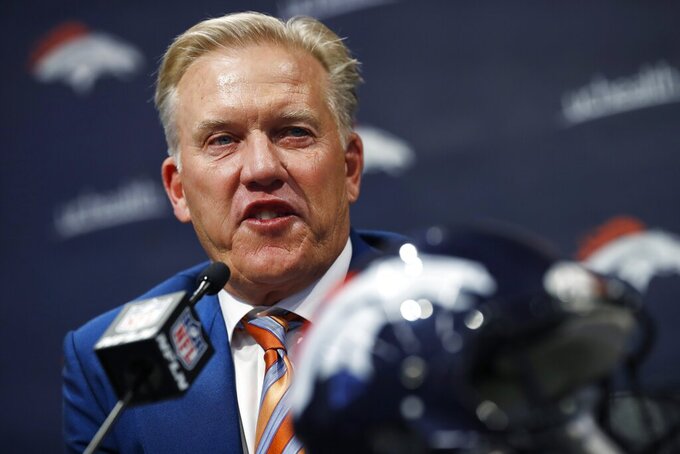 ENGLEWOOD, Colo. (AP) — After landing running back Phillip Lindsay out of Colorado after last year's draft, Denver Broncos general manager John Elway was hoping to grab another Buffalo he viewed as an overlooked gem in wide receiver Juwann Winfree.

But he couldn't wait for the conclusion of the draft as he did with Lindsay, who went on to have a great rookie season last year when he became the first undrafted offensive rookie ever selected to the Pro Bowl.

"We'd heard some things that some other teams were interested, so when you get there late in the draft like we were and we had him targeted, we're doing everything we could to get up and fortunately we found a trade partner in Carolina and were able to get up and get him," Elway said after selecting Winfree in the sixth round Saturday.

Winfree started only seven games in college. After playing sparingly at Maryland as a freshman, Winfree spent a year at Coffeyville Community College before enrolling at Colorado. But he tore an ACL at camp and missed the 2016 season. He also missed a month last year with a high ankle sprain.

In two seasons at CU, Winfree caught 49 passes for 649 yards and four touchdowns.

Still, he realized his dream of getting drafted after impressing the Broncos at the pro day they held for local players.

"It feels like everything right now," Winfree said. "To be around my family and have all this come alive, that's all I've been working for since I was a kid. It just helps prove that God is real. I just never stopped and I will never stop. I still have a far way to go and this is step one."

The Broncos' only other Day 3 pick was versatile Oregon linebacker Justin Hollins in the fifth round.

Although he was primarily an edge rusher in college and stands 6-foot-5 and 243 pounds, Hollins could be the Broncos' answer at inside linebacker.

"He has played a little bit of inside linebacker, particularly at one of the all-star games," coach Vic Fangio said. "We're going to try him at both spots while he's here and see where he's got the best future or where he's the best fit for us at this time."

"I'm going to play anywhere they need me," he said. "I'm one of those guys who is just going to get in and play where I am needed, whether that is special teams, inside, outside, it doesn't matter. I am here to compete. I am here to play as hard as I can and provide the team with some type of impact."