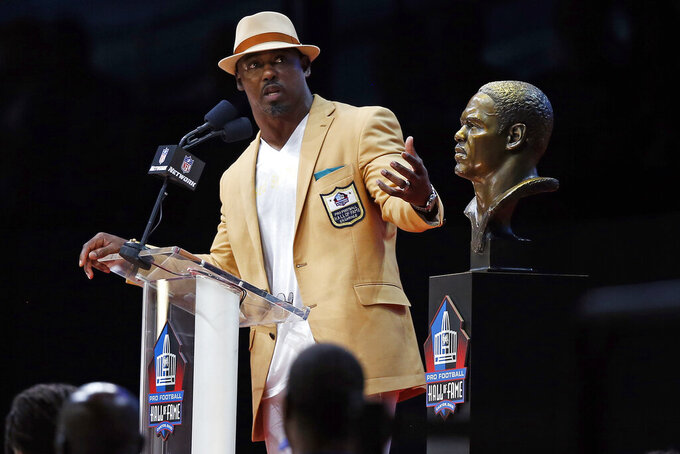 FILE - In this Aug. 4, 2018, file photo, former NFL safety Brian Dawkins delivers his induction speech at the Pro Football Hall of Fame in Canton, Ohio. Dawkins was the heart and soul on defense during the team’s impressive run of success in the 2000s.(AP Photo/Ron Schwane, File) 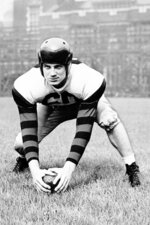 BEST FIRST-ROUND DRAFT PICK: C/LB Chuck Bednarik. Concrete Charlie was the No. 1 overall pick in the 1949 NFL draft and is the league’s last full-time two-way player. He missed three games his rookie season and started every game over the next 13 years. Bednarik helped the Eagles win two NFL titles and was inducted into the Pro Football Hall of Fame in 1967. (RB Steve Van Buren -- No. 5, 1944 — is a close second).

BEST SECOND-ROUND DRAFT PICK: S Brian Dawkins. There are several players who belong in the conversation, including QB Randall Cunningham (1985), CB Eric Allen (1988), LB Maxie Baughan (1960), RB LeSean McCoy (2009), TE Zach Ertz (2013) and WR DeSean Jackson (2008). But Dawkins (1996) was the heart and soul on defense during the team’s impressive run of success in the 2000s. His unique skills helped Dawkins become the first defensive back in franchise history elected to the Hall of Fame.

BEST LATE-ROUND DRAFT PICK: C Jason Kelce. This was a difficult choice but a slight edge goes to Kelce, a sixth-rounder out of Cincinnati in 2011, over LB Seth Joyner (eighth round, 1986) and DE Clyde Simmons (ninth round, 1986). Kelce is a three-time All-Pro and was an integral part of a team that won a Super Bowl with a backup quarterback.

WORST FIRST-ROUND DRAFT PICK: LT Kevin Allen. Selected ninth overall in 1985, Allen started just four games before being benched as a rookie. He was released the following season and went to jail for rape, serving 33 months of a 15-year term. DT Leonard Renfro (No. 24, 1993) started two games and lasted only two seasons. OT Bernard Williams (No. 14, 1994) played one season. DE Jon Harris (No. 25, 1997) had two sacks in only two seasons. DE Jerome McDougle (No. 15, 2003) never started a game and had three career sacks in four seasons.

WORST SECOND-ROUND DRAFT PICK: DT Bruce Walker. Selected 37th overall in 1994, Walker never played a game with the Eagles. He was released in training camp, signed with the Patriots and played five games in his only NFL season. Other busts include LB Quinton Caver (2001), S Jaiquawn Jarrett (2011) and DE Victor Abiamiri (2007). Caver didn’t start a game and was released in his second season. Jarrett started two games in only two seasons. Abiamiri had four sacks and lasted only three seasons.

BEST DRAFT TRADE: After regaining his role as personnel boss following a one-year hiatus, Howie Roseman traded up from No. 13 to No. 8 to No. 2 to get his franchise quarterback, Carson Wentz, in 2016. A year later, Wentz led the Eagles to the No. 1 seed in the NFC before backup Nick Foles stepped in and helped them win the first Super Bowl title in franchise history when Wentz was injured. Roseman gave Cleveland a first-round pick (No. 8), a third-rounder and a fourth-round pick in 2016; a 2017 first-rounder and a 2018 second-round pick for No. 2 and a 2017 fourth-round pick.

WORST DRAFT TRADE: Philadelphia moved up 15 spots in 2003 to get McDougle at No. 15, sending a first-round pick (No. 30) and a second-rounder (No. 62) to the Chargers. Hall of Fame defensive back Troy Polamalu went to Pittsburgh one spot after the Eagles selected McDougle.

DID YOU KNOW THEY ONCE DRAFTED?: First Heisman Trophy winner Jay Berwanger. The University of Chicago star halfback was the first player selected in the initial NFL draft in 1936, but the Eagles traded him to the Bears because they couldn’t sign him. Berwanger skipped the NFL to compete in the Olympics in the decathlon. He didn’t make the U.S. team and then couldn’t agree to a contract with the Bears, so he never played in the NFL.