Injuries to Leonard, Castonzo keep Colts out of sync in loss 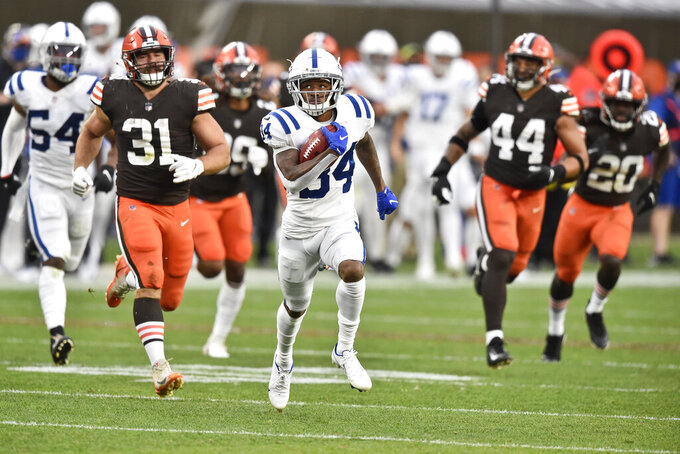 Indianapolis Colts cornerback Isaiah Rodgers (34) returns a kickoff for 101-yard touchdown during the second half of an NFL football game against the Cleveland Browns, Sunday, Oct. 11, 2020, in Cleveland. (AP Photo/David Richard)

And without those two key cogs, neither the offense nor the defense was in sync during the 32-23 loss at Cleveland. While they clearly need both, they also must figure out how to run effectively at less than full strength.

“I thought we were competitive, but they were highly efficient in the first half on offense," coach Frank Reich said Sunday. “We really felt like we were going to play well in the second half and turn the thing around, and then we spotted them some points. Those are things we have to overcome."

Cleveland's offensive numbers weren't spectacular. Baker Mayfield threw for 261 yards and two touchdowns, was picked off twice and appeared to get hurt late in the game. The Browns finished with 385 yards despite not punting until early in the fourth quarter. And while they hung 32 points on the league's top scoring defense, nine came courtesy of the Browns defense.

A week earlier, with Leonard missing the second half at Chicago because of a groin injury, the Colts still played well. This time, the Browns (4-1) didn't force a punt until the fourth quarter.

Sometimes, Cleveland simply made better plays such as Jarvis Landry's 18-yard reception, pinning the ball against the helmet of Colts linebacker Bobby Okereke, or the 26-yard catch Odell Beckham Jr. made on his biceps. Other times, like D'Ernest Johnson's decisive 28-yard run on third-and-9 with 2:27 left, the Colts simply failed.

“A lot of plays, we felt like we were right there," linebacker Anthony Walker said. “Great catches by those guys. Again, this is the NFL. They are going to make plays. They get paid just like we do."

The bigger problem came on the offensive line, which didn't start the same five for the first time in 21 games.

Le'Raven Clark replaced the injured Castonzo (ribs) and although Philip Rivers was only sacked once, he was under duress more Sunday than any game this season and it showed.

Twice, Rivers tried to force the ball into coverage and was picked off. Another time with Myles Garrett bearing down on him, Rivers threw the ball away from the end zone and was called for intentional grounding.

They struggled in the red zone, too — all areas in which Castonzo's presence could have helped.

Getting both back could change everything, starting next weekend when Cincinnati (1-3-1) visits Lucas Oil Stadium.

Run defense. Sure, the Colts gave up 124 yards rushing against the league’s best running team, but the Browns needed 33 carries to do it, averaging 3.8 yards per carry, against a defense without its Pro Bowl linebacker.

The red-zone offense has been a consistent problem all season and played and a key factor in both losses.

While Jonathan Taylor capped Indy’s first drive with a 4-yard TD run on fourth down, it was the only TD the Colts scored in four trips inside the Browns 20-yard line. Indy must improve in this facet to become a serious playoff contender.

A week after rookie Jordan Glasgow partially blocked a punt, rookie kick returner Isaiah Rodgers had a 101-yard kickoff return for a score — the longest return since the Colts moved to Indy in 1984.

Rodgers and Nyheim Hines, who returned two punts for touchdowns against Carolina last December, give the Colts two dangerous returners.

“Nope, no consideration of that at all,” Reich said Monday when asked if he's thought about replacing Rivers with Jacoby Brissett. “Philip is our quarterback."

Reich said tight end Mo Alie-Cox had a knee injury during the game and defensive end Justin Houston hurt his hip. All four Reich said, would be monitored this week.

42.11 — the percentage of red-zone trips the Colts have converted into touchdowns. Only the Jets, Giants and Bengals have been less productive.

Indy needs to put on a much better show against a Bengals team that is allowing 25.2 points per game and has forced just three turnovers in five weeks. Then it has a bye week to get healthy before the schedule gets much more difficult.