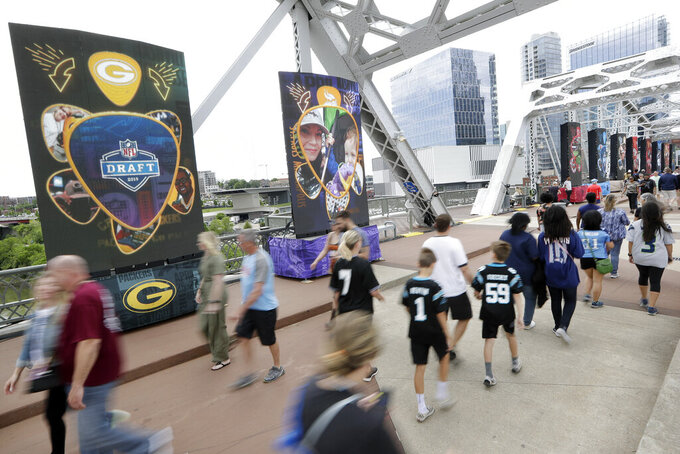 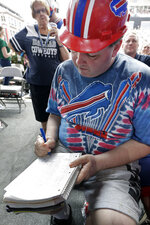 NASHVILLE, Tenn. (AP) — Let's talk quarterbacks. As in potential backup quarterbacks in the NFL, and maybe starters down the road.

Eleven quarterbacks were chosen in the three rounds of the draft. The trio that went in the opening round — No. 1 overall Kyler Murray to Arizona, No. 6 Daniel Jones to the Giants, and No. 15 Dwayne Haskins to Washington — figure to be starters someday, perhaps soon.

Murray goes to a team that traded away its first-round QB from last year, Josh Rosen, to clear the path for the Heisman Trophy winner. New coach Kliff Kingsbury was an offensive mastermind at Texas Tech with an offense that fits Murray's dynamic skills.

Jones will sit, though no one knows for how long, behind Eli Manning in New York. He was chosen to succeed the two-time Super Bowl winner, of course.

Haskins could grab the job in D.C. because incumbent Alex Smith is not expected to recover sufficiently from major leg injuries to be available in 2019. Last season's backup, Colt McCoy, also broke his leg. So the Redskins traded for Denver's Case Keenum, but that looks like a stopgap.

As for the rest of those 11 passers, they all went to clubs with established veteran starters except for Trace McSorley. The resourceful Penn State QB landed Saturday in Baltimore, which moved from Joe Flacco to 2018 first-rounder Lamar Jackson in the middle of last season.

McSorley is a similar player in style to Jackson, so the marriage there could result in a second-string job for him.

"I've seen him play against Michigan a few times and looked pretty good," said Ravens coach John Harbaugh, whose brother, Jim, coaches the Wolverines. "I hated him then, now I love him. He's our kind of guy. ... He's gritty and tough and that's what we look for."

Playing time for the others is, well, a long shot.

Missouri's Drew Lock went to Denver, which recently acquired Flacco. West Virginia's Will Grier was taken by Carolina, where Cam Newton reigns. North Carolina State's Ryan Finley will be behind Andy Dalton in Cincinnati. Auburn's Jarrett Stidham is with New England, where he might have to wait a decade for Tom Brady to retire. North Dakota State's Easton Stick, the successor to Carson Wentz at that school, wound up with the Chargers. Northwestern's Clayton Thorson went to Philadelphia, where Wentz is ensconced.

The Jags noted how smart Minshew is. He certainly can count.

"Yes, you will sit down with him and (realize) this guy could be a coach. It is impressive," Jaguars director of college scouting Mark Ellenz said. "We interviewed him at the combine, a formal interview, and he was at the Senior Bowl also, but he is a sharp dude."

Stidham goes where the league's oldest quarterback resides, of course.

"I don't think I feel any pressure," he said. "It's an awesome opportunity to learn from a guy like Tom. He's played so much, he's seen everything, he's won a lot, there's just so many intangibles that I want to soak up from him. I'm sure everybody wants to be as good as Tom Brady someday ..."

"It's kind of just like high school," he said. "Going to college, you come in as the guy and obviously there are other guys there. I learned from Trevor Siemian my freshman year of college. I'm really looking forward to getting in there and learning from Nate (Sudfeld, the current backup) and Carson. ... Just keeping myself ready to go at any moment."

His peers would do well to have the same approach wherever they wound up.

The third and final day of this NFL draft as memorable for the scene, the music and the passion of the folks in Nashville began Saturday with Arizona selecting Iowa State wide receiver Hakeem Butler. The last four rounds rarely have much intrigue, but still drew thousands of folks to downtown Nashville.

Approximately 500,000 people attended the three days of the draft, packing Broadway to hear the picks, listen to the tunes in the honky tonks — and by Tim McGraw in a rousing concert Friday night — and make this "selection meeting" unlike anything the NFL has seen. Later Saturday, following the final pick, Dierks Bentley took the stage.

Nashville's performance likely puts it firmly in the NFL's mind for a repeat; Las Vegas is on tap next year for the draft.

"Far outkicked our coverage, our dreams, our thoughts," said Butch Spyridon, president and CEO of the Nashville Convention & Visitors Corp. "Way bigger than anything we could've imagined."

The first special teamer went to San Francisco, which drafted Utah punter Mitch Wishnowsky at No. 110. Oddly, the next such player taken was his teammate, placekicker Matt Gay by Tampa Bay 35 spots later.

Wishnowsky actually can punt with both legs.

"I mean, I can kick with my left foot decent," he said. "It's nothing pretty. I definitely prefer to put it on the right, but if necessary, I can throw it on the left and maybe get something out of it."

Tight end Caleb Wilson got something out of the very end of the draft. He was Mr. Irrelevant, the 254th and final selection. The pick was announced by Titans kicker Ryan Succop, who was the last pick in 2009 and, with a decade in the pros, has been the most successful Mr. Irrelevant.