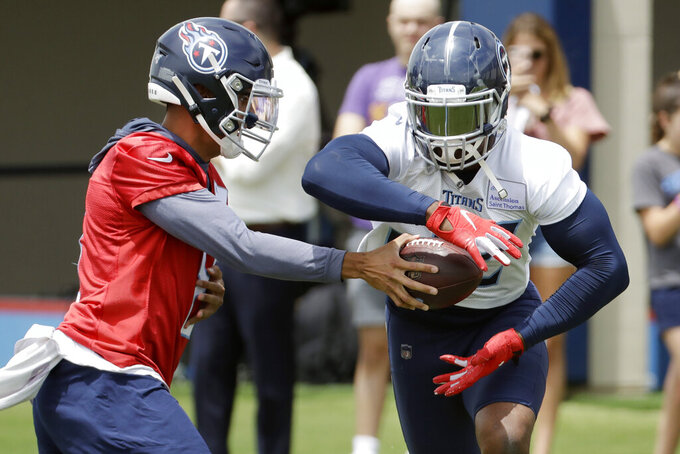 Tennessee Titans quarterback Marcus Mariota hands off to running back Derrick Henry during an organized team activity at the Titans' NFL football training facility Tuesday, June 11, 2019, in Nashville, Tenn. Both players are in the final year of their contract. (AP Photo/Mark Humphrey) 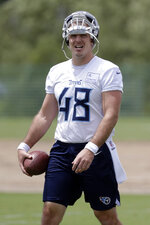 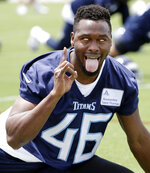 NASHVILLE, Tenn. (AP) — The Tennessee Titans opened their mandatory minicamp Tuesday with no drama and new left guard Rodger Saffold the lone absence, and he was excused for personal reasons.

Not bad considering at least 15 Titans are going into the final year on their contracts, including eight starters.

Marcus Mariota already has made it clear he's ready to "let it ride" this season. Safety Kevin Byard, an All-Pro in 2017, is leaving contract talks to his agent. Other starters in the final year of their contracts include running back Derrick Henry, cornerback Logan Ryan, center Ben Jones, linebacker Wesley Woodyard, right tackle Jack Conklin and nose tackle Austin Johnson.

Titans coach Mike Vrabel says he only reminds players that this is professional football.

"Everybody has got a contract, we all have one," Vrabel said. "Some guys have years remaining, some guys are going to expire after the end of this year. We understand that. But, we all have a job to do. I was in that position plenty of times as a player, and the only thing I would tell you as my position was as a coach is, you try to do the best job at the job that you have before you start worrying about the next one."

Mariota has to prove that he can be healthier after missing three starts last season. Injuries didn't stop Philadelphia from signing Carson Wentz to a four-year extension worth $128 million last week. Mariota said Tuesday that he can't control those things.

"I just got to focus on what I can do to help this team out on the field," Mariota said. "Those things off of it, it's a business, and we'll see what happens."

Byard is the prime candidate for an extension now. He hasn't missed a game since becoming a starter and has 12 career interceptions, three sacks and 246 tackles. Byard insists his focus is working each day while trusting his agent and the Titans.

"Both sides are talking and things like that, and I think as of right now I let my agent handle all that stuff," Byard said Tuesday. "At the end of the day, I'm focused on trying to be a leader for this team by doing that.

"I feel like I'm doing everything they've asked me to do as far as coming here, be a leader, show up, come to practice every single day. I'm hoping the team rewards me or my teammates ... when you come and do what we're supposed to do."

Henry tied for the AFC lead with 12 touchdowns last season and was second in the AFC with a career-high 1,059 yards rushing. The 2015 Heisman Trophy winner couldn't have been shorter when asked about his contract.

"I don't worry about that," Henry said. "Next question."

Ryan missed the last two games of 2018 with a broken leg. The veteran going into his seventh NFL season still is looking for his first interception with Tennessee, though he had a career-high four sacks last season. He said he's extremely fortunate just to practice during the offseason and enjoy every moment.

"We're all under contract right now, and that's all we can do with it," Ryan said. "Whether you want a new contract or you don't, it doesn't really matter. All that matters is what you do this season. This is a one-season league, make-or-break league every single year. We see it each and every season ... So that's just how this season is, and that's how this sport works. So we've got to be into it this season. That's a good thing."

Notes: TE Jonnu Smith and Conklin, who both finished last season on injured reserve, were seen working individually after practice ended. ... Christion Abercrombie, a Tennessee State football player who needed brain surgery after collapsing on the sideline during a game last September, was at practice Tuesday. Vrabel said Abercrombie's improvement is "phenomenal" after seeing him while in the hospital after surgery.