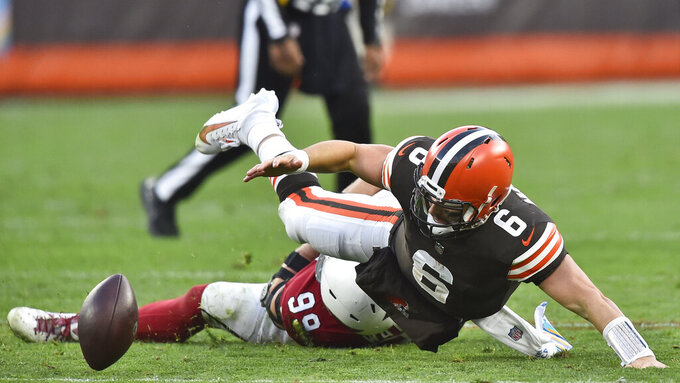 Cleveland Browns quarterback Baker Mayfield (6) fumbles and is injured on a play during the second half of an NFL football game against the Arizona Cardinals, Sunday, Oct. 17, 2021, in Cleveland. (AP Photo/David Richard)

CLEVELAND (AP) — As loud music blasted inside Arizona's locker room, players danced and could be heard shouting “undefeated” while coach Kliff Kingsbury smiled at the wild scene via a FaceTime call from home.

The Cardinals survived — undaunted and perfect.

Kyler Murray threw four touchdown passes as the Cardinals remained the NFL's only unbeaten team and continued their best start since 1974 — without Kingsbury on Sunday — with a 37-14 win over the battered, reeling Cleveland Browns.

The Cardinals (6-0) built a 20-0 lead in the first half and kept their perfect record intact despite not having Kingsbury or star linebacker Chandler Jones, who both tested positive for COVID-19 this week.

“It was a rough week,” said Cardinals defensive coordinator Vance Joseph, who took on some of Kingsbury's duties. “No one wavered. No one blinked. Every day it was bad news.”

Murray connected with DeAndre Hopkins for two TDs, and Arizona's shifty quarterback came up with a clutch play whenever the Cardinals needed one.

Following the game, owner Michael Bidwell reached Kingsbury, who was able to talk to several players and coaches.

“I couldn't really hear him because it was pretty loud,” said Murray, who joked that Kingsbury's absence allowed him to freelance a little more. “It might be a product of not having a coach out there. I have a little more leeway without him.”

Murray said he and his teammates weren't unfazed by the succession of COVID-19 cases.

“I think we were even more excited because the odds seemed stacked against us,” Murray said. “It was on us to give them our best.”

The Browns (3-3) have lost two straight under coach Kevin Stefanski for the first time and Cleveland has bigger concerns, most notably a growing list of major injuries.

The latest was to running back Kareem Hunt, carted to the locker room in the fourth quarter with a calf injury. Coach Kevin Stefanski said Hunt did not injure his Achilles tendon and will undergo further imaging on Monday.

Cleveland was already missing star running back Nick Chubb (calf) and the Browns, who host Denver on Thursday night, played without both their starting offensive tackles.

Mayfield's left arm was in a sling as addressed the media following the game.

"I mean, it dislocated again and then slipped out again on a non-contact play, so just got to figure out a way to get better,” said Mayfield, who was asked if he plans to play Thursday night.

The Browns were trailing 23-14 when Cardinals star defensive end J.J. Watt chased down Mayfield and forced a fumble by sweeping out the QB's legs. Mayfield stayed down for several minutes — with Watt kneeling nearby — and was twice examined in the medical tent, but stayed in.

After his fumble, Murray made the Browns pay by throwing a 9-yard pass to a wide-open Hopkins to put the Cardinals ahead 30-14.

Later, Hunt was not targeted on a pass play and the bruising back crumpled to the ground without contact. He was unable to put any weight on his leg while being assisted to the sideline.

Arizona learned Friday it would be without Kingsbury, the team's play caller, along with quarterbacks coach Cam Turner and defensive linemen Zach Allen after positive COVID-19 tests. They were already going to be missing Jones and then defensive linemen Corey Peters was placed on the COVID-19 reserve list before the game.

“The operation was very smooth, being on the road for us to not have coach Kliff,” Murray said. “Whipp kept calling it aggressively and we got it going.”

Murray made sure the Cardinals didn't miss a beat. He completed 20 of 30 passes for 229 yards and matched his career best with the four TDs.

Desperate for a positive play, the Browns got one on the final snap of the first half as Mayfield completed a 57-yard TD pass to Donovan Peoples-Jones.

A week ago, Mayfield attempted a similar “Hail Mary” on the last play in a 47-42 loss to the Chargers.

Cleveland's defense helped the Cardinals by committing four penalties for 43 yards on Arizona's second scoring drive. Two of the calls went against tackle Malik McDowell, for face masking and roughing on Murray.

On third-and-goal, Murray hit Hopkins with a short pass and he eluded two tacklers for a 13-yard TD to make it 14-0.

Cardinals: DL Rashard Lawrence (calf) didn't play in the second half. ... TE Darrell Daniels suffered a hamstring injury in the first half and didn't return.

Browns: Rookie LB Jeremiah Owusu-Koramoah went to the locker room in the fourth period with an ankle injury.

Cardinals: host the Houston Texans on Oct. 24. It's the first of three home games in four weeks for Arizona.

Browns: little time to heal with the Broncos coming in for the second of Cleveland's three home games in two weeks.