Packers' Crosby eager to bounce back after 2021 struggles 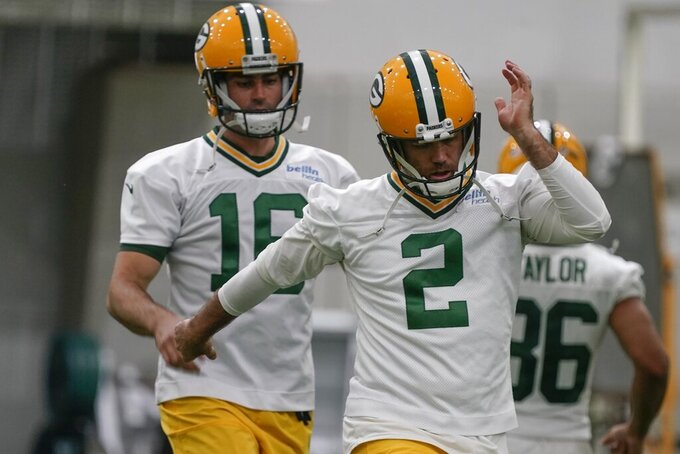 When former Chicago Bears punter Pat O’Donnell was looking for a place for his family to live after signing with the Packers in March, Crosby invited them to stay over at his house.

“We just wanted to get to know them as much as possible early on, so that as we moved through this, it just kind of makes things easier,” Crosby said.

Crosby and O’Donnell had only known each other as opponents up until this point.

But in the three weeks that the O’Donnell family stayed at their house, they got to know each other well enough to produce a video homage to the movie “Step Brothers” that each posted on social media.

“I feel we accelerated our friendship by like three years in those three weeks,” O’Donnell said.

The Packers are hoping they established the kind of chemistry that can help the 37-year-old Crosby bounce back from a tough season. Green Bay’s career scoring leader made just 73.5% of his field-goal attempts last season for his lowest accuracy rate since 2012.

Crosby broke his own franchise record by making 27 consecutive field goals from 2020-21, but the end of that streak in a 25-22 overtime victory at Cincinnati marked the beginning of a tailspin. He went through a midseason stretch in which he missed eight of 14 field-goal attempts.

He went 10 of 11 over the Packers’ last six regular-season games, but had a 39-yard attempt blocked in a 13-10 playoff loss to the San Francisco 49ers.

Crosby was working with a new holder last season after the Packers acquired Corey Bojorquez to replace JK Scott as the punter. The Packers also switched long snappers at midseason, with Steven Wirtel replacing Hunter Bradley.

Asked about how he can put his 2021 struggles behind him, Crosby replies by saying he wants to get better from those experiences.

Crosby has a history of responding after his rare slumps. He made a career-low 63.6% of his field-goal attempts in 2012, but was accurate 89.2% of the time the following season.

“He’s come back from a down year (before) to play really well,” Bisaccia said earlier this offseason. “So I’m excited about being around him, learning from him, seeing what his strengths are and where we can go forward and keep improving.”

“He's going to tell you how he feels and where you stand," Crosby said. “He’ll applaud you when you do it well and then he’ll correct it right away whenever it needs to be adjusted. So I love just the clear-cut, 'This is what’s expected.’ That’s how I operate. There’s no gray area there.”

The Packers have kicker Dominik Eberle on the roster as well, but continue to show faith in Crosby. They’ve looked for other ways to boost their special teams.

Packers general manager Brian Gutekunst has acknowledged they signed O’Donnell to take over for Bojorquez, now with the Cleveland Browns, in part because of O’Donnell’s consistency as a holder.

Crosby's recent living arrangements show how eager he was to get to know his new holder.

“We just kind of learned the rhythms of how we operate,” Crosby said. “Seeing the things he does on and off the field, it’s been good for me to just kind of continue to learn and grow as well. He’s a pro’s pro.”

That growth will include plenty of bonding away from the practice field. The Crosby and O’Donnell families aren’t living under the same roof anymore, but they’re still spending time together.

“We try to see them quite a bit still because their little daughter, my kids really fell in love with her,” Crosby said. “They kind of wear her out and chase her around, so she goes home and takes good naps.”

NOTES: Cornerback Rasul Douglas practiced Tuesday after not being present for the workout last week that was open to reporters. ... Offensive tackle David Bakhtiari is attending practices but isn’t participating in workouts. Bakhtiari tore his left anterior cruciate ligament on Dec. 31, 2020. He returned in the Packers’ regular-season finale last season, but wasn’t available for the playoff loss to the 49ers. “Our plan all along was to kind of hold him from this time of year and make sure he’s continuing to get stronger and ready to go hopefully for training camp,” Packers coach Matt LaFleur said.