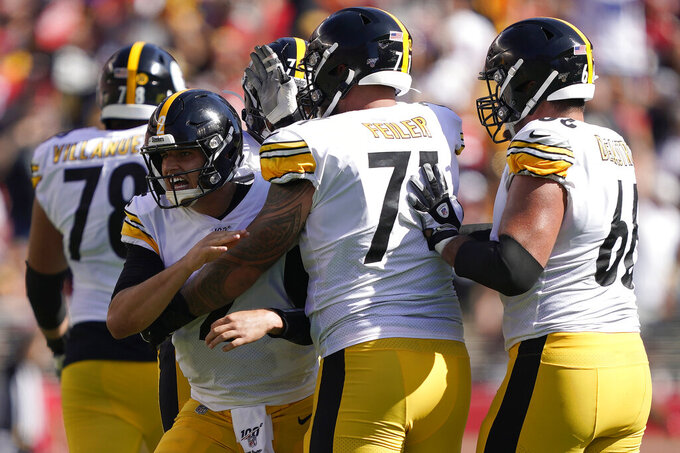 Yet he knows how it goes. When things don't go well, the first order of business is placing the blame squarely on your shoulders.

So Rudolph did after a 24-20 loss to San Francisco on Sunday dropped the Pittsburgh Steelers to 0-3 for the first time since 2013, even though Pittsburgh's issues stretch far beyond the 24-year-old's uneven performance.

"A lot of mistakes," Rudolph said after completing 14 of 27 passes for 174 yards with two touchdowns and an interception in his first start while filling in for injured Ben Roethlisberger.

"We can't be that slow-starting in the first half. I have to give our team and our defense more of a chance to put some points up early and get ahead with all of the turnovers they created. They played unbelievable. They did everything coach asked them through the week in creating turnovers and flying around. We have to back them up."

He's half right. The Steelers did force the sloppy 49ers into five turnovers. Yet the defense also allowed San Francisco to roll up 168 yards rushing and couldn't protect the lead twice in the second half after Rudolph connected on a pair of long scores to put Pittsburgh in front.

Rudolph's sluggish start was due in large part to jitters — he overthrew a handful of passes in the first half — and a conservative game plan that seemed intent on building his confidence instead of letting him sling it downfield.

When the reins finally loosened after halftime he found JuJu Smith-Schuster for a 76-yard catch-and-run and a wide-open Diontae Johnson for a 38-yard strike.

Both throws, however, came after an ill-advised lob across his body that turned into a pick the 49ers converted into a touchdown.

Running back James Conner also fumbled deep in Pittsburgh territory late in the fourth quarter, giving San Francisco a short field to go ahead for good.

"We turned the ball over twice," Steelers coach Mike Tomlin said. "They scored two touchdowns in the second half and really that's the difference in the game. In the first half, we were getting turnovers and we were settling for field goals."

A disparity that highlights Pittsburgh's thin margin for error with Roethlisberger out for the year with an elbow injury.

The Steelers host winless Cincinnati (0-3) next Monday. The winner can keep some semblance of a flicker of hope alive in a division that's a combined 3-9 through three weeks.

Asked how he keeps the team together in the face of adversity, Tomlin shrugged.

"We're not into the keep it together discussions," he said. "That's not how we're built. We have a game next week. We'll be ready."

Pittsburgh stressed the need to have greater "ball awareness" after managing to create just 15 takeaways in 2018. The Steelers already have seven so far in 2019. While some of San Francisco's turnovers were self-inflicted mistakes, two were on interceptions by linebacker T.J. Watt and newly acquired safety Minkah Fitzpatrick.

James Conner's breakout 2018 season ended with him making the Pro Bowl and quietly muting any concerns about Le'Veon Bell's absence. Three games into this season, Conner has struggled to get anything going. He has just 97 yards rushing and as many fumbles as touchdowns.

Fitzpatrick was even better than advertised in his debut with the Steelers following a trade with Miami early last week. Fitzpatrick forced a fumble and picked off a pass and in general looked every bit the hard-hitting and versatile player Pittsburgh envisioned when it parted with a 2020 first-round draft pick to get him.

Tomlin gave wide receiver Donte Moncrief the week off after Moncrief spent his first two games in Pittsburgh dropping passes with alarming regularity. Whether Moncrief returns to the active roster anytime soon will depend on how quickly he can regain his confidence and rebuild trust with the coaching staff.

Tight end Vance McDonald left with a shoulder injury and did not return. His status for next week is uncertain.

6. The number of teams since 1981 who have started 0-3 and reached the postseason. The Steelers nearly did it in 2013 after beginning the season 0-4. Pittsburgh rallied to finish 8-8 and would have made the playoffs if not for a missed field goal by Kansas City's Ryan Succop at the end of regulation in Week 17 that allowed San Diego to claim the final wild-card spot.

Having offensive coordinator Randy Fichtner come up with a scheme that doesn't wait so long to let Rudolph do his thing. Rudolph set records at Oklahoma State by leading an Air Raid-type attack that allowed Rudolph to throw the ball vertically rather than the short-pass heavy approach used against the 49ers.