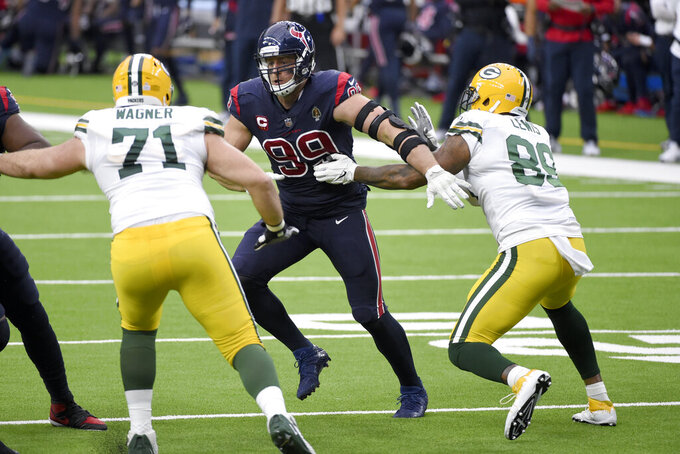 JACKSONVILLE, Fla. (AP) — The Jacksonville Jaguars have been here before. Fairly often, too.

The Jaguars (1-6) are last in the AFC South, the same spot they occupied in each of the last two seasons and three times in the last four years.

This time, though, they have company.

Houston (1-6) is tied with Jacksonville at the bottom of the division. The Texans haven’t brought up the rear in the South since 2013.

One of them will double their win total and escape the AFC South cellar when they meet Sunday. The home crowd might even be secretly pulling for the visiting team.

On pace for another losing season, many among the Jaguars faithful already have turned their attention toward potential leadership changes, the NFL draft and the prospect of finding a franchise quarterback. Landing Clemson’s Trevor Lawrence, Ohio State’s Justin Fields or North Dakota State’s Trey Lance might depend on losing games the rest of the season.

Jacksonville has dropped six in a row, giving up at least 30 points in each one, and is now making a quarterback change.

Rookie Jake Luton, a sixth-round draft pick from Oregon State, will start in place of Gardner Minshew (thumb) and make his NFL debut against the Texans. The 6-foot-6 Luton has NFL size and a big arm. But he lacks mobility and experience, and has a lengthy injury history.

Luton may have caught a break Thursday when the Texans placed three linebackers, including standout Whitney Mercilus, on the COVID-19 list. Jacob Martin tested positive for the coronavirus, and Mercilus and Dylan Cole were forced to isolate for five days because of contact tracing. They have to test negative for five consecutive days before rejoining the team.

“Man, they just need to forfeit the game,” Jaguars defensive end Josh Allen quipped. “Just get all them guys healthy and move onto Week 10. I’m just kidding. I hope everybody is healthy over there. I don’t wish nobody to get sick or miss any games. I’m just ready to play.

The series has been all Houston of late.

The Texans have won five straight, 11 of 13 and 16 of the last 20 against Jacksonville, a streak of one-sidedness in an era of NFL parity.

Houston’s lone win this season came against Jacksonville, a 30-14 victory a month ago in Romeo Crennel’s debut as interim coach. The Texans have since given up a combined 77 points in consecutive losses to Tennessee and Green Bay.

“Well, I think everybody thinks we stink and so I’m going to tell them that we stink. OK?” Crennel said. “And then if we can do better than that, if we can get some deodorant, then we’ll smell a little bit better. A win is like deodorant to me.”

The Texans continue to search for ways to improve their run defense and running game while being among the worst in the NFL in both areas.

David Johnson has been mostly ineffective since joining the Texans in a trade that sent star receiver DeAndre Hopkins to Arizona in March. The Texans believe he might be pressing a bit as his struggles have mounted.

“He wants to get out there and probably try to hit a home run at times where he probably needs to take what’s given,” running backs coach Danny Barrett said. “We talk about being patient and the game will come to him.”

Texans quarterback Deshaun Watson is undefeated in five starts against Jacksonville, a constant reminder that Jacksonville could have — and probably should have — drafted him with the fourth overall pick in 2017. Jaguars personnel chief Tom Coughlin chose running back Leonard Fournette instead and stuck with embattled starting quarterback Blake Bortles.

“You’re looking at someone that has a high level of confidence, has a really good arm, can throw it deep, short, has good accuracy, plus he can run,” Marrone said. “So there’s a lot of things that you have to be able to defend to try to stop him.”

Stadium workers will work long into the night Saturday getting TIAA Bank Field turned around between college and pro games.

Florida and Georgia will play in front of about 18,000 fans Saturday afternoon, and seats, club areas and locker rooms will have to be cleaned, sanitized and prepped for the NFL game the next day.

It's the first time the Jaguars will play a home game the day after the rivalry known as the “World's Largest Outdoor Cocktail Party.”