Titans right where they wanted atop AFC South at midpoint 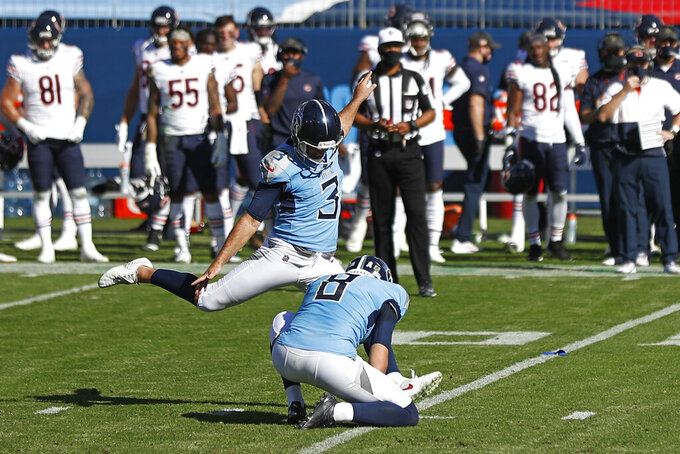 NASHVILLE, Tenn. (AP) — The Tennessee Titans are exactly where they wanted to be, sitting atop the AFC South with their playoff fate firmly in their hands.

The Titans learned the importance of needing to at least start the postseason at home after being forced to win three straight road games to reach the AFC championship last January before losing to the Chiefs.

Tennessee is off to a 6-2 start midway through this season. It's the Titans' best start since 2008, and that's also the previous time Tennessee won the AFC South.

“We put ourselves in position again to play a lot of meaningful games in the second half of the season,” Titans coach Mike Vrabel said Monday.

The Titans won their first five to start this season, then stumbled with back-to-back losses. But Tennessee has not lost three straight since making Ryan Tannehill the starting quarterback, and they snapped that skid with a 24-17 win over Chicago.

Tannehill said they've done some good things and need to clean up some things.

“Excited about the toughness we have, both mentally and physically, and being able to find a way to win,” Tannehill said.

The offense with Ryan Tannehill and Derrick Henry. They rank seventh in points, scoring 29 a game. The Titans also are second only to Seattle scoring touchdowns inside an opponent's 20 at a clip of 80%.

Tannehill so far has answered doubts he could follow up last season when he led the NFL in passer rating. He has thrown 19 TD passes with only three interceptions. Henry leads the AFC and is second in the league with a career-best 843 yards rushing midway through the season, and he's third among running backs with eight TD runs.

The defense. The Titans are tied for 15th in fewest points allowed, giving up 25.1 points a game. But they remain the league's worst unit on third down allowing 55.3% conversions even after holding Chicago to just 2 of 15 (13.3%). They're not much better in total yards, ranking 25th giving up 394.1 yards a game.

Credit general manager Jon Robinson and Vrabel for not wasting any more time with linebacker Vic Beasley Jr and making other changes on the fly. Cornerback Desmond King scooped up a fumble and scored in his debut after the Titans traded for him a week ago.

A.J. Brown. The second-year wide receiver is showing no signs of a sophomore jinx as he leads the Titans with 31 catches for 457 yards with six TDs despite missing two games with an injured knee. Brown has two 100-yard receiving games this season and seven in his short career. He's also had at least one TD catch in five straight games.

Stephen Gostkowski. He's just 11 of 18 on field goals for a 61.1% success rate. That's still a big improvement for the Titans, who were last in the NFL last year at 44.4%. He's also had two field goals blocked, and Tennessee waived its veteran long snapper last week. The four-time Pro Bowl kicker came in making 87.4% of kicks in his career and now is down to 86.3%.

The Titans' top three draft picks have played a combined seven games because of injuries. First-round pick Isaiah Wilson has yet to dress as he works his way back from two stints on the reserve/COVID-19 list.

10: The Titans lead the NFL with a plus-10 in turnover margin. They've got 14 takeaways and have only four turnovers this season. Only Green Bay (three) has had fewer in the NFL.

The easy portion of the Titans' schedule ends Thursday night when they host Indianapolis (5-3) in an AFC South showdown. Then they will have to be road warriors with five of the final seven games away from home, including a Nov. 22 trip to Baltimore and a Dec. 27 visit to Green Bay.

Only three of the final seven currently have losing records: Jacksonville, Detroit and Houston.