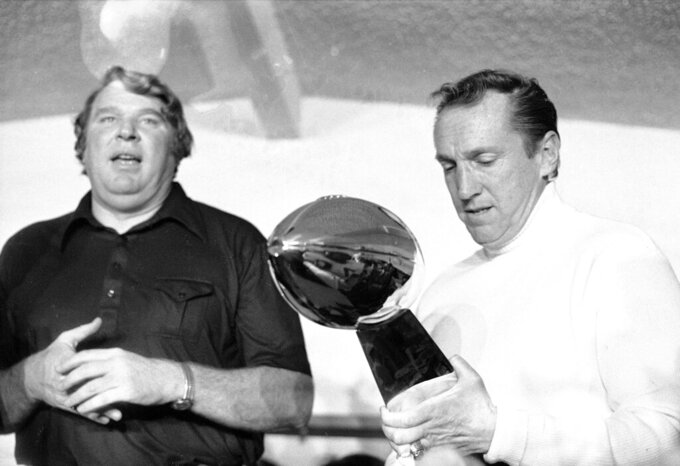 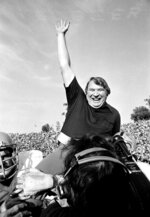 When coach John Madden's Oakland Raiders arrived at the Rose Bowl for the Super Bowl in 1977, the toughest part of the job was already done.

After years of falling short of the title game with crushing playoff losses to rivals like Miami and Pittsburgh, the Raiders made easy work of the Minnesota Vikings in a 32-14 victory Jan. 9, 1977, that made all of owner Al Davis' boasts about winning and excellence prove true.

“They can never take it away from you,” Madden said later about that Super Bowl win that was the defining moment of his coaching career. “Maybe the fact that we chased it so long made it bigger to us. It was the greatest feeling in the world. There’s nothing that can beat it.”

For Davis' Raiders, the journey to the title was a long one. Oakland had lost Super Bowl 2 to Vince Lombardi's Packers with John Rauch as coach before failing six times in the next eight seasons with a berth in another Super Bowl on the line.

So when they got past the Steelers 24-7 in the AFC title game two weeks earlier in 1977, there was no way the NFC's perennial heartbreak team could topple them.

“We had tougher games in the AFC than we had today," Madden said after the Super Bowl. “We had plenty of opportunities to watch others go to the Super Bowl and we did not want the atmosphere to upset our concentration. We had a good week, we enjoyed it and winning this game is a perfect end to a perfect season.”

That version of the Raiders might have been the best ever for a franchise that had decades of success until its recent struggles. They went 16-1, losing only a Week 4 game to New England, and won seven of their final eight games by double digits.

Hall of Fame coach Tom Flores was also an assistant on that team and receiver Cliff Branch could join those getting the honor later this year.

With talent like that, the Vikings were no match in the first NFL game played at the venerable Rose Bowl.

“We knew by Wednesday we were going to win,” linebacker Phil Villapiano said after the game. “The only hard part from then on was waiting for the game.”

After surviving an early blocked punt, the Raiders dominated the game. They set a Super Bowl record at the time with 429 yards of offense, Clarence Davis running for 137 yards behind Shell and Upshaw; Pete Banaszak rushing for two scores; Stabler throwing a TD pass; and MVP Biletnikoff setting up two TDs with four catches for 79 yards.

Brown, part of the losing team in the Raiders' first Super Bowl appearance, iced it with a 75-yard interception return for a score.

“Winning this game make up for the other Raiders who came before and didn’t have a chance to participate on a winning Super Bowl team,” he said later. "This victory meant not only a lot to me, it meant a lot to the entire Raider organization.”

The victory allowed Madden to retire two years later as a champion. Flores took over and led the Raiders to two more titles in the 1980s, cementing the Raiders' legacy.

While the victory ended years of heartbreak for the Raiders, it was just another missed opportunity for the Vikings. Minnesota had lost three Super Bowls before this game, losing in 1970 to the Chiefs, 1974 to the Dolphins and 1975 to the Steelers.

“Most people never get here,” running back Chuck Foreman said after the game. “I don't know if we'll get another chance. When you get here as many times as we have and you can't win, what can you say?”

The title that eluded the Vikings that day still hasn't come to Minnesota. The franchise hasn't even made it back to that stage, losing six NFC title games since then, including two in excruciating fashion to Atlanta following the 1998 season and New Orleans following the 2009 season.