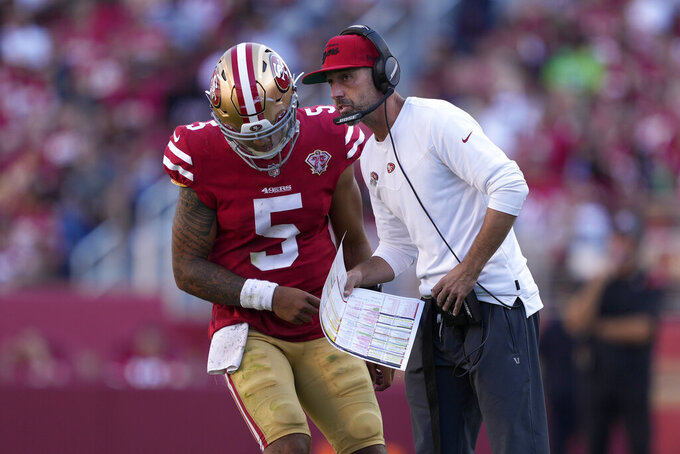 SANTA CLARA, Calif. (AP) — Rookie quarterback Trey Lance will make his first start for the San Francisco 49ers after Jimmy Garoppolo was ruled out of this week's game with a calf injury.

Garoppolo hurt his calf in the first half of last week's 28-21 loss to Seattle and left the game at halftime. The Niners were hopeful he could return this week but Garoppolo never felt healthy enough to practice, setting the stage for Lance to start Sunday at Arizona.

“I feel very prepared,” Lance said Friday. “I really do. It's a credit to the coaching staff and the guys around me. Those guys made me feel really confident this week and I feel confident in myself.”

Coach Kyle Shanahan said Garoppolo would have played if he was healthy and will regain his starting role as soon as he is recovered.

The Niners invested heavily in Lance this offseason, trading three first-round picks to take him third overall in the draft to be quarterback of the future.

San Francisco wanted to be patient with Lance, who had only one season as a starter in college at lower-level North Dakota State. Lance played just seven snaps in a situational role the first three weeks before playing the entire second half in last week's 28-14 loss to Seattle.

Now he gets his first chance to start when he will try to become the first Niners rookie quarterback to win his first start since Jim Druckenmiller won his only career start in 1997.

“I’m excited to see him play,” Shanahan said. “I know he’s got the ability to do a lot of things. But it’s going to be the first time out there for the whole game. I’m just pumped to see him play, but I don’t go into it expecting anything. You try to prepare a guy as good as you can from our standpoint. I know he’s done his part in preparing. Then when Sunday comes, that’s usually the spot where you get to have fun and just cut it loose and you live with the results.”

Lance's results were up and down in his extensive action last week. He struggled with his accuracy at times, but took advantage of a blown coverage to connect on a 76-yard TD pass to Deebo Samuel and led a late TD drive capped by another touchdown pass to Samuel.

Lance could be without star tight end George Kittle, who is listed as doubtful this week with his own calf injury. Kittle played through the injury last week, but didn't feel good enough to practice at all this week, leaving his status for Sunday in doubt.

NOTES: QB Nate Sudfeld will be called up from the practice squad to serve as Lance's backup Sunday. ... CB K’Waun Williams (calf) was also ruled out for a second straight game. ... DL Samson Ebukam (hamstring) and DT Javon Kinlaw (knee) are questionable.