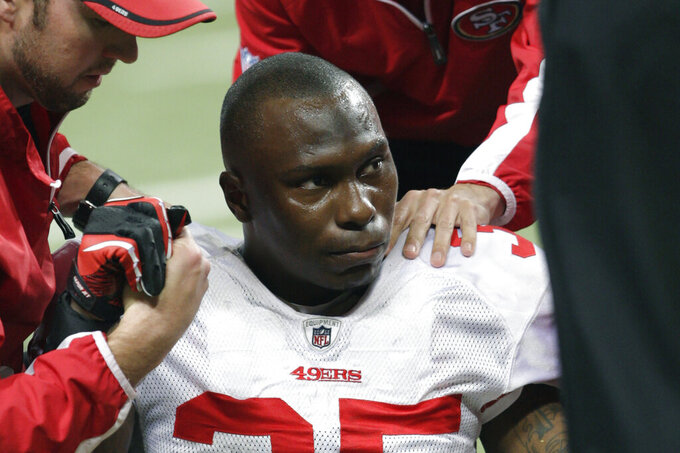 FILE - In this Dec. 26, 2010 file photo, San Francisco 49ers cornerback Phillip Adams (35) is attended to after injuring his left leg during the third quarter of an NFL football game against the St. Louis Rams, in St. Louis. A source briefed on a mass killing in South Carolina says the gunman who killed multiple people, including a prominent doctor, was the former NFL pro. The source said that Adams shot himself to death early Thursday, April 8, 2021. (AP Photo/Tom Gannam, File)

The NFL and its players’ union have an array of health programs designed to help players in their life after football. According to his agent, Phillip Adams did not avail himself of those opportunities.

Adams, a journeyman player, spent six seasons in the league. Authorities say he fatally shot five people in South Carolina — including a prominent doctor, his wife and their two grandchildren — before killing himself early Thursday.

Agent Scott Casterline told The Associated Press the 32-year-old Adams did not participate in the physical and mental health programs that are easily accessible for ex-players.

"We encouraged him to explore all of his disability options and he wouldn’t do it,” Casterline said, noting that Adams' career was undercut by a severe ankle injury as a rookie in 2010. “I knew he was hurting and missing football but he wouldn’t take health tips offered to him. He said he would but he wouldn’t.

“I felt he was lost without football, somewhat depressed.”

The NFL Players Association offers assistance through its Players Athlete Foundation, Former Players department, and The Trust, which launched in 2013 and assists members by providing access to resources, experts and partners after football.

The Trust’s Brain & Body Assessment uses individually tailored assessments by such medical institutions as the Cleveland Clinic and Mass General to give retired players an in-depth evaluation of overall health. The assessments include internal, neurological, neuropsychological/behavioral, cardiovascular and musculoskeletal exams. Also featured is rehabilitation and evaluations of sleep habits, body composition and diet.

“All the areas they examined and assessed,” former NFL player Kendall Simmons said, "from nutrition to body composition, to orthopedics, to mental health examinations, to cognitive and general wellness assessments. I felt very secure having had such a thorough physical.”

The league's Total Wellness Program and NFL Player Care Foundation are available to all active and retired players. Included are such benefits as work/life resources, enhancement assessment and counseling, and neurological treatment.

The Player Care Foundation was created in 2007 as an independent organization dedicated to helping retired players improve their quality of life. It assists with medical, emotional, financial, social and community issues.

Nine years ago, an NFL grant created the NFL Life Line. It serves current and former players, coaches, team and league staff, and family members, who might be in crisis. Life Line is a free, confidential and independently operated resource that connects callers with trained counselors who can help with personal or emotional crises. That service is available around the clock.

Citing confidentially, the league and union would not say whether Adams took advantage of any of these programs.

“He was a good quiet kid. He overworked," said former Dallas Cowboys defensive back Kevin Smith, who helped train Adams for the 2012 draft. "I used to have to tell him you don’t have to do so much. ...

"Recently, our only communication was through Instagram and he was real short. He didn’t say a whole lot. That was just him. He was such a good kid. I didn’t see mental issues outside of the fact that his pride was a double-edged sword. What drove him, all the hard work, also worked against him.”