Analysis: Road teams dominate in Week 4 and in September 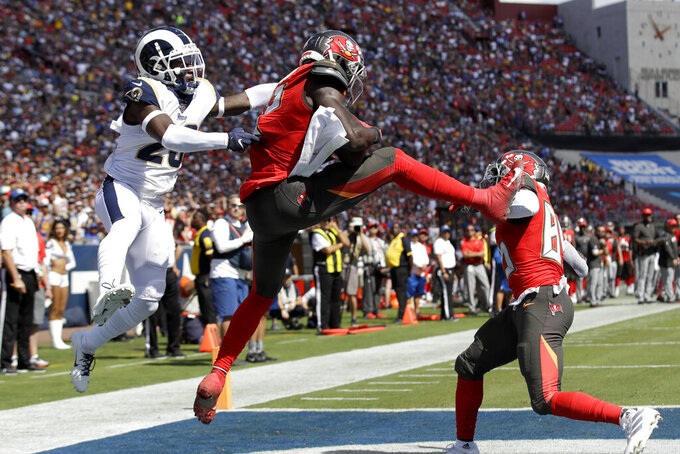 Losing at home in September could force some teams to have to win on the road in January.

There was no home-field advantage in Week 4 in the NFL. Road teams are 10-3 entering Monday night's Bengals-Steelers game. Three of those 10 teams were at least 6 1/2-point underdogs.

Of course, it's easier to win on the road the first month of the season when the weather is nicer and elements aren't a factor. Doing it later in the season is a much tougher task, so earning a No. 1 or No. 2 seed is vital for a team's playoff success.

Twenty-five of the last 32 teams to play in the conference championship games had first-round byes.

The home team won 10 straight conference title games before last season. Nine were won by No. 1 seeds, and the other by a No. 2. The Patriots and Rams both were No. 2 seeds who won on the road last season.

Two of the road teams who won Sunday were favorites and are expected to battle it out for the No. 1 seed in the AFC.

The Patriots relied on defense as Tom Brady looking ordinary in a 16-10 win at Buffalo. New England improved to 4-0 for the time in four years.

The Chiefs rallied for a 34-30 win at Detroit to also improve to 4-0 on a day when reigning MVP Patrick Mahomes didn't throw a touchdown pass after tossing at least two TDs in 14 straight games, one short of the NFL record set by Peyton Manning.

Let's take a closer look at implications of the road upsets in Week 4.

PHILADELPHIA at GREEN BAY: The Eagles saved their season by going to Lambeau Field on a short week and knocking off Aaron Rodgers and the Green Bay Packers 34-27 on Thursday night. The victory coupled with Dallas losing at New Orleans on Sunday night moved Philadelphia (2-2) to within one game of the Cowboys (3-1). Down the road, the victory gives the Eagles a tiebreaker advantage over the Packers (3-1) if the teams finish tied.

CLEVELAND at BALTIMORE: The Browns took early control in the AFC North with their rout over the Ravens. Both teams are 2-2 while the Bengals and Steelers are winless heading into their matchup. Cleveland hosts Baltimore in Week 16, so the division crown could be determined that week, but the Browns already have an edge because they won on the road.

TAMPA BAY at LOS ANGELES RAMS: The Buccaneers are 2-2 thanks to their stunning offensive outburst against the Rams (3-1). The loss could come back to haunt Los Angeles because the Rams are in a tough division that includes San Francisco (3-0) and Seattle (3-1).

CAROLINA at HOUSTON: The Panthers avoided a 1-3 start with a 16-10 win over the Texans, who fell to 2-2 just like the rest of the AFC South teams.

OAKLAND at INDIANPOLIS: The Raiders and Colts are both 2-2 following Oakland's win. Indy missed an opportunity to move atop its division standings.

JACKSONVILLE at DENVER: The Jaguars kept pace with the rest of their division by edging the Broncos 26-24. Denver is 0-4 and already playing for the draft positioning.